There hasn't been a lot of baseball news to talk about, so we've been largely entertaining ourselves with various hypotheticals. Though somewhat fun, I know many of us yearn for some real baseball news. Unfortunately, the closest we can get at the moment is an update on contract negotiations between MLB and MLBPA. A couple days ago, Max Scherzer provided just that as he spoke to the LA Times and gave us a bit of insight into what has been going on from the MLBPA's point of view. His points boil down to just a few issues:

I'm just going to go ahead and take those in order.

On tanking, Scherzer states, "This negotiation is about the integrity of the game from our eyes. We feel as players that too many teams have gone into a season without any intent to win during this past CBA." He even expands by saying, "that cannot be the optimal strategy for the owners." Notice how Scherzer reframes the issue of tanking as "integrity of the game", while I think a lot of fans, and owners alike, would actually call it "rebuilding". Certainly, these ideas are not mutually exclusive. Tanking, when taken to its extreme, could be seen as a threat to the integrity of the game, even if it does ultimately result in a rebuild. My only thought is, how often do these extreme results actually happen and how much of a pervasive problem is it? Despite my initial skepticism, Scherzer may be onto something here as the dispersion in win-loss record has increased in recent years (Figure 1; as measured by the Coefficient of Variation in Team Win Totals, meaning higher numbers have more variation in wins), but it isn't that much different than what it was in the 2001-2004 period. So, I'm not inclined to think this has got so bad that the integrity of the game is at stake. 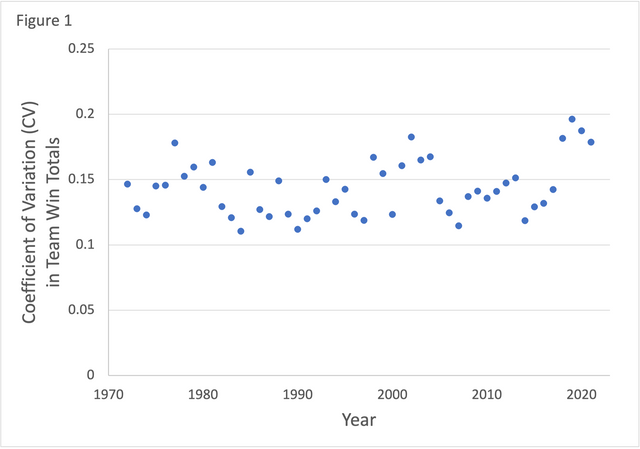 For Scherzer's second point, I don't think there is much dispute that service time manipulation is a case of a billion-dollar business taking advantage of the system before them in any way they can. And ultimately it hurts the guys that come up and have a good couple years, then get hurt or flame out before really making any "real" money.

However, in discussing how young players and vets get paid, Scherzer brings something up that I didn't know was as intentional as he makes it out to seem, saying "When you look back at the history of our union, we made a deal called the grand bargain. The grand bargain is that you make less money early in your career so that you can make more money later in your career." I had to do a bit of digging, the first reference I see to that phrase was in June of 2019 from Tony Clark, MLBPA Director, "In acknowledging and recognizing that, you appreciate that the system - and what I'll call the grand bargain that was in place going back 40-plus years - is no longer reflective of the realities of today. As a result, the system doesn't work."

So, let's just put that in plain English. Scherzer and Clark are saying that it was agreed on that young players wouldn't make a lot of money early on, while they were under team control, in order to pay players later in their careers. But now, they are shocked that MLB owners don't want to pay older players more money by, as Scherzer states, "chiding away middle-class free agents", and are instead just getting a new crop of younger players for a lot less? Well... ya, don't say?

In short, my thoughts on this are simply that this is what happens when you let a business entity have control over so much excess value. One set of players, or employees, are largely stripped of their ability to negotiate a fair wage based on the value of their services, while the another set is not. Which do you think an employer is going to choose, if given the chance? Correcting this issue doesn't come from preventing service time manipulation, it comes implementing systems that don't rely on service time or drastically reduce it. But, I suspect a union run largely by guys that have "made it" don't really have an interest in that.

In this case, Scherzer states that the union is clearly not for a cap system. He states, "We're not trying to tie ourselves to the revenues. That's a cap system." And he goes on to say, "teams are treating the luxury tax as a cap more so than the original intent of the luxury tax." Clearly the connection is being drawn between a luxury tax, a cap and tying player compensation to revenue. From this, it is clearly that the Union is fully in favor of teams spending whatever they want, and why wouldn't he be?

While his self-interest is understandable, this also creates a contradiction. If you are concerned about tanking because of the "integrity of the game", doesn't having two or three teams with the means blowing away everyone else on payroll effectively create the same problem? It couldn't actually be that you just want a system where a team like the A's, Rays, or Marlins are forced into spending $100M/year and if the Yankees, Red Sox and Dodgers spend $500M, so be it? Meanwhile, those middle tier free agents get gobbled up for depth on a rich team or because poor teams need a "representative product" (and burn payroll while they rebuild anyway), but then you're happy to leave the six year service clock intact (oh unless you're turning 29.5 or older, then it can be five...) and not help the people that really need it the most, minor leaguers.

I only have all this criticism for Scherzer and the Union because they happened to the be ones speaking. And I'm confident if Manfred, or any other representative from MLB, spoke up, I'd have at least at much to say about them. In the end, I really just want there to be a reasonable solution arrived at by both sides so that the game is healthy and the lockout doesn't continue into the part of the calendar that actually starts to matter. Unfortunately, according to Jeff Passan of ESPN, there is some increasing skepticism that this dispute won't bleed over into the regular season. So please, take this as one fan's plea that both sides pull their heads out of their rears and we can all get back to watching and talking about actual baseball.

It's been more than 30 days since MLB's lockout started and the sides haven't had one substantive conversation. Spring training is fast approaching. At ESPN+, a look at how bad things are -- and a potential path to a deal: https://t.co/M4cgjfeLwp pic.twitter.com/ykIvsOFg94