Last week I looked at some trends in Major League Baseball and how they correlated with increasing length of games. The main results of that article being K rate, HR rate, pitches per PA and pitchers per game where strongly associated with increasing game lengths. Several theories as to what is causing the increase in game length came out of that article and the comments in response to it. While some questions are harder to answer with publicly available data, such as time between pitches, we can at least attempt to answer of few of them. The top theories included max effort pitching, emphasis on TTO outcomes, pitchers trying nibble against stronger and smarter hitters, and more frequent pitcher changes to take advantage of matchups and decrease times through the order disadvantages.

We'll start our investigation of some of these theories with the hitters. Clearly hitters are striking out and hitting homers more than ever, but can we dig a bit deeper? First, let's inspect the league's latest obsession: Exit Velocity (EV) and Launch Angle (LA). Below I have charted EV and LA against year going back to when data became available in 2015. Here, you can see the average ball has 88.4-88.8 MPH EV over this time, but the average LA has increased from ~11 degrees to ~12.5 degrees. This may not sound like a much, but at 89 MPH the change from an 11-degree launch angle to a 13-degree launch angle moves you wOBA from .720 to .920 (according to 2019 data)! Specifically, with this change, the chance at a double goes from 4.9% to 21.2%. Two degrees of launch angle on a medium-well struck ball makes a huge difference. 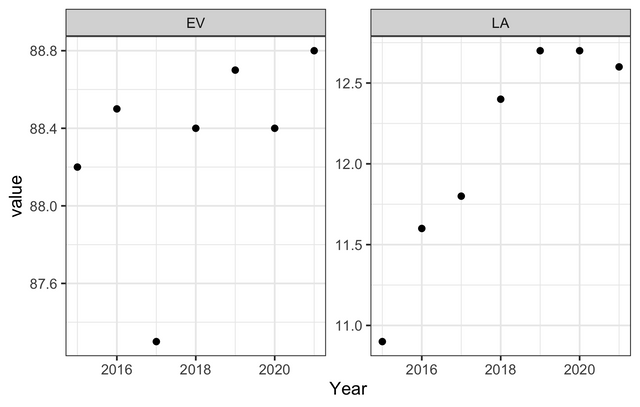 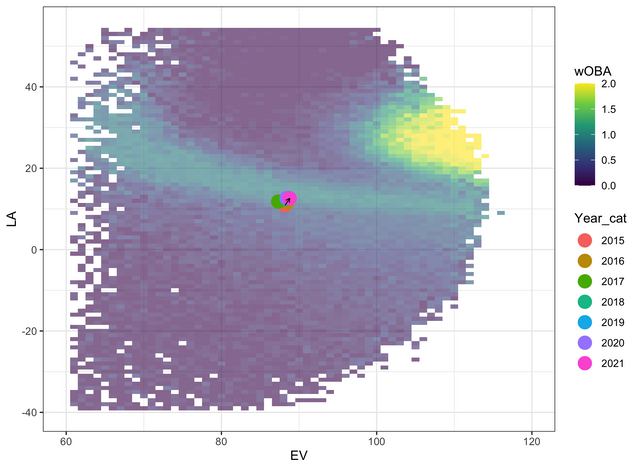 Right off the bat then, we can tell hitters are making changes to their swing. They are emphasizing a bit more of an approach to lift the ball, but despite the EV-obsession, the average Ball In Play (BIP) isn't being hit much harder (note: the distribution of BIP in terms of EV and LA is super non-normal, with a high skewing towards higher numbers, especially in EV. This may warrant further investigation, but for now this will have to do). This suggests the changes in LA alone should mean batted balls are doing more damage today than in 2015 (and probably before that, given the anecdotes we have around the EV/LA obsession starting around the time Josh Donaldson turned into an MVP candidate with the A's in 2013). Below, I've plotted the broad batted ball type classifications (fly ball, ground ball, HR per fly ball, infield fly ball and line drive; all data from here on is FanGraphs.com) to see how this change in LA is manifesting over time. What appears to be true is that outside possibly IFFB%, no clear trend in the strict batted ball category types (potentially there has been a trend towards more FBs in the post EV-LA era starting around 2015, but it's still below the ~2010 ratios). What does change rather dramatically is that out of the flyballs hit, more of them are leaving the ballpark. This might suggest that all batted balls aren't just being hit higher in terms of LA, but that its generally only balls already hit in the air that are being hit higher/further. 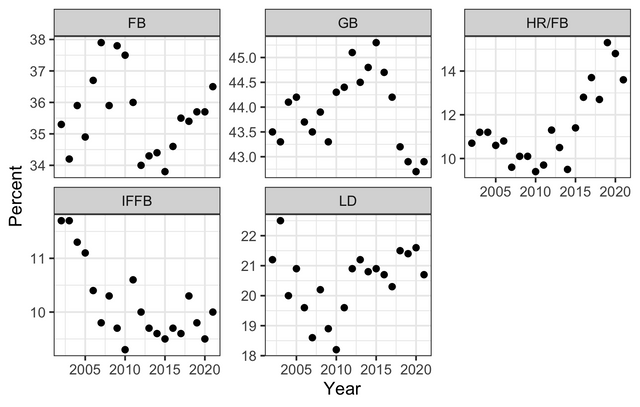 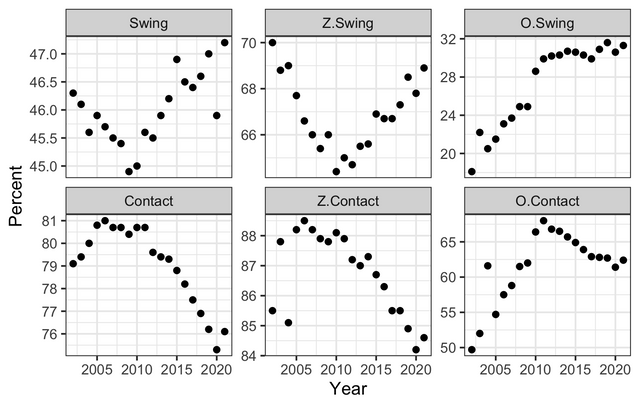 These swings and misses, however, might also be due to changes to pitching practices. While most of us might be generally aware that fastball velocity (FBv) has on average gone up over the last few years, I decided to plot this, and other pitches (slider velocity: SLv; curveball velocity: CBv; change up velocity: CHv). I was surprised to find that all pitch velocities across the board have gone up by something like 4 MPH over the last two decades. Hitters have likely been struggling to adapt to this increase in velocity across, which would work to reduce their ability to locate a pitch before they commit to swing. However, the trend doesn't match with the swing rates and contact rates above. 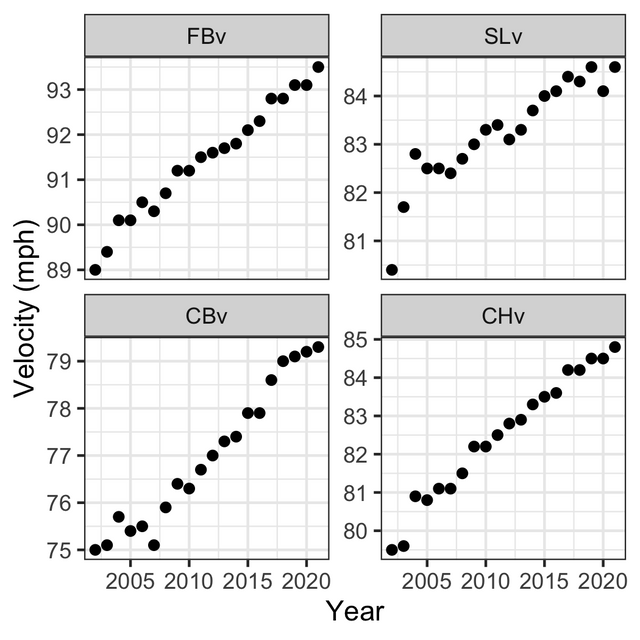 To investigate further what might be going on here, I've plotted the pitch usage by percent of fastballs (FBp), sliders (SLp), curveballs (CBp) and change ups (CHp), and what jumps right out is that despite increasing fastball velocity, which theoretically should make that pitch more effective, fastball usage has dropped from 65% to just over 50% today. This change is largely thanks to the increase in slider usage, but also cutter and split fingers, which I haven't plotted. 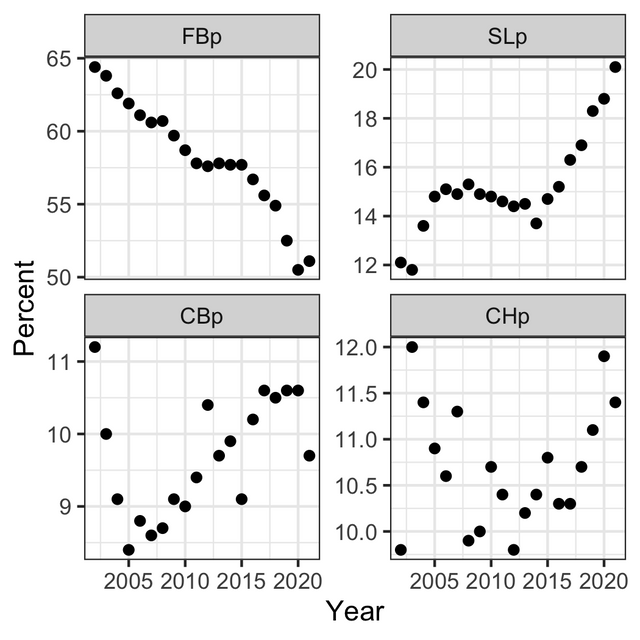 Tying this all this back into game lengths, this increase in slider usage has led to the in-strike-zone rate for pitches plummeting from 54% in 2002 to 42% in 2021 (not plotted). And it's worth remembering that even with a O.swing rate of 32%, that means about two out of three of those additional out-of-zone pitches are not swung at and are going for balls. However, when comparing Zone Percent to O.Swing rate below, something shocking emerges; Pitchers have apparently figured out that the more they throw junk outside the zone, the more batters are willing to swing at it! No doubt this is aided by the pitcher's increasing ability to throw so hard. 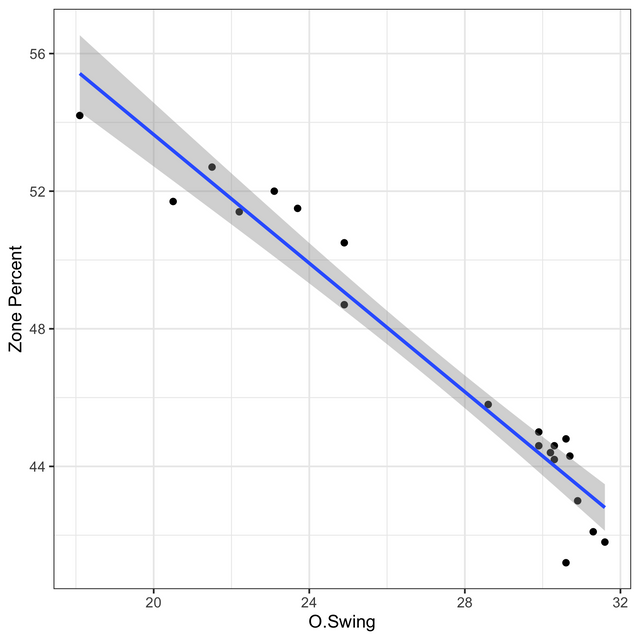 At its core, I believe the increasing game times come down to the evolution of the classically battle between the pitcher and the hitter. Hitters are smarter, faster and stronger than ever. They know OBP and SLG are more important for run scoring, so they are naturally trying to produce those outcomes and training mentally and physically to achieve them. Pitchers, and pitcher usage, have been forced to evolve in response to this, potentially by the increase in usage of sliders. However, pitchers have likely undergone their own evolution towards increase velocity that, I'd assume, would have happened with or with changes to the hitter.

I actually entered this piece thinking something like, "If MLB just made a higher drag ball, it would discourage hitters from hitting fly balls, as balls that spend a lot of time aloft would not go as far. This would lead to fewer homers coming from fly balls and ultimately a return to more ‘line drive' hitting approaches that produce more contact, fewer long PAs, more balls in play, and a faster more exciting game." However, after inspecting this data, I now believe it isn't that simple. Compensating for the increase in pitch velocity is something few rule changes (like pitch clocks) or changes to the ball are likely to accomplish (well unless you make the ball heavier, but that's got health implications). Instead, you'd have to change the field of play by moving the mound back or potentially decreasing the mound height, again. A higher drag ball may still have the effect of getting hitters away from a fly-ball-heavy approaches that lead to swings and misses, but all these 94+ MPH fastballs and hard sliders aren't going stop with a higher drag ball (in fact it may make sliders more effective).

To conclude then, if moving the mound back is unpalatable, the best course of action may be to strike at the heart of the problem another way: shrink rosters, create more limits pitching changes and prevent teams from shuttling relievers back and forth from AAA. In theory, with less pitchers to work with, teams and pitchers will have to adapt to allow for pitchers to pitch longer into games, leading to less max effort pitching. If this was done with adoption of a higher drag ball, the two forces may just mostly offset in terms of run environment, but we'd have that faster game that I think most of us would like.