Game length, pitchers and three true outcomes, yes, they are all linked.

In 2021 the average time for a nine-inning game touched three hours and ten minutes for the first time in history. Game lengths have steadily been getting longer over the last few years, despite various measures to speed them along. Not only that, but the game is increasingly dominated by what's referred to as the three true outcomes, which are home runs, walks and strike outs. With less balls in play and longer games, some fans might be a bit disappointed in the game today. Here, I'm going to take a deep dive into the reasons for the longer, more boring game and provide some suggestions for ways to change things.

First off, yes, games have gotten really long. This isn't just your grandpa speaking or an #OKboomer thing. Games have been getting longer and longer for decades and the younger generations aren't tuning in (The average age of an MLB viewer is getter older faster than most other major sports). As recently as 2011, the average nine inning game was almost 20 minutes shorter, at around 2:50. For the period between about 2003 to 2011, games hovered in a tight range around 2:45-2:50. This turned out to be but a blip in what has been a trend in ever increasing game times since about 1980, however. While games used to be 2:30 40 years ago, we've now been solidly over 3 hours for several years now. That might not sound like a lot, but with 7:05pm start times common on weekdays, every minute matters. 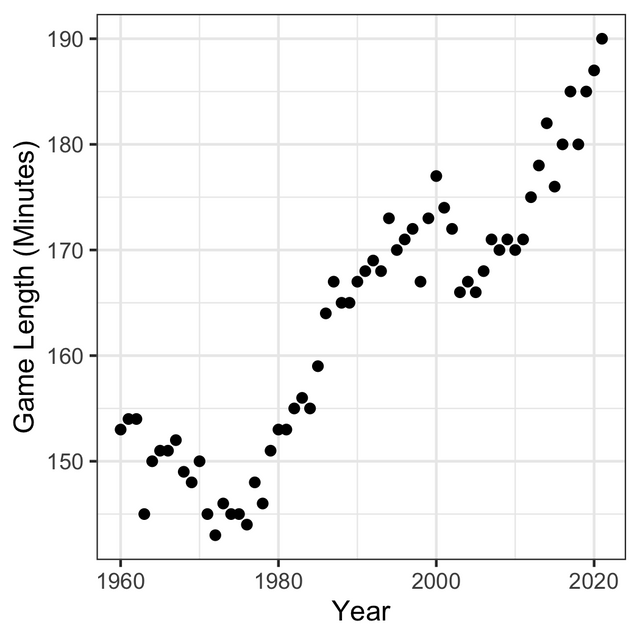 Now, let's inspect the reasons why. Baseball-reference.com has a nice page that outlines a number of factors that might contribute to the increasing game length, including runs per game, plate appearances per game, pitches per game, batters or pitchers per game. Several of these have changed a lot over the years. Runs per game and PAs per game went up in the Steroid Era, but have since come back down. Batters per game has actually been dropping since the early 90s. But then we get to the pitching, and several of these factors have gone up, a lot. Pitches per PA has been on a steady upward trend since data has come available, but pitches per game is a bit more mixed, thanks to the PAs per game actually falling since 2000. And then there is pitchers per game, and just WOW! From 2.5 around 1980, to almost 4.5 today. And the trend is almost perfectly linear. 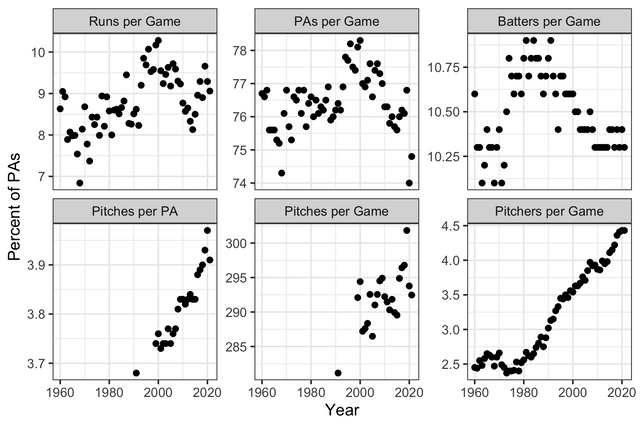 By switching to plotting these metrics against time of game, rather than year, we can try to associate these metrics more directly to game length. A few of the metrics, pitchers per game and pitcher per PA have very strong correlations, and highly significant slopes. Pitches per game also comes out with a strong association but is the weakest of the directly pitcher-related factors. Runs per game also had a smaller, but still meaningful, correlation. Though the previous graph also hints at this, I am still surprised at just how non-correlated PAs per game is with game length. Taken together, this leads me to think it isn't really the total pitches or PAs that are the problem, but rather this is being driven by pitcher changes and max effort pitching. 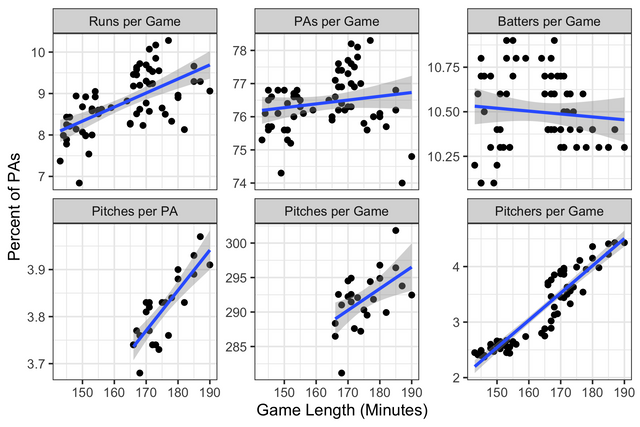 Let's try to get a bit more granular now, by inspecting the change in the Three True Outcomes over the few decades. The amount of change in overall TTO, HR rate and K rate is truly astounding. Relative to 1997, these represent approximately 30%, 40% and 40% increases in TTO rate, HR rate and K rate, respectively. I was very much surprised that walk rate is not changing over time with this explosion of the TTO and its associated narrative. Though I knew this was going on with TTO rates generally, the extent to which it is happening, and specifically to HR rate and K rate, was a shock. 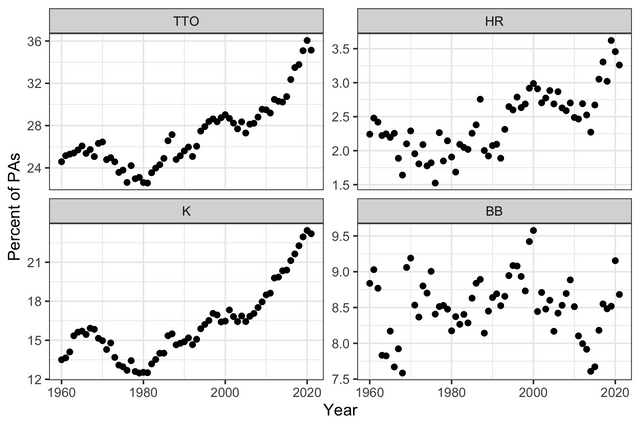 Now, we'll inspect the association between the three true outcomes and game time, and maybe not surprisingly, those increases over time with TTO, HR rate and K rate also carry over to being associated with game length. 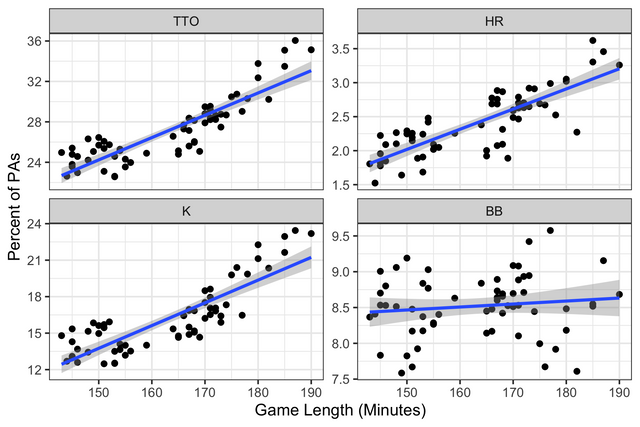 In conclusion, what we're seeing here is that length of game is highly correlated with year, and that pitches per PA, pitchers used per game, K rate and HR rate are all also correlated with length of game. Though I'm not showing it here directly, those four statistics are also correlated with year. Correlation of course does not prove causation, but it sure does suggest there is a relationship buried in here somewhere and the cause, or causes, may impact all these things together. And though correlation doesn't prove causation, non-correlation of other measures, like BB rate, pitches per game or runs per game, does suggest we don't need to focus on effects that go into those statics to speed up games. The cause, instead, must be something that's causing Ks, HRs, lots of new pitchers and deep outs. I know, not exactly unexpected given what we know, but it is interesting to see it born out strongly in the trends above.

These statistics all suggest one thing to me: Continuous max effort hitting and pitching is slowing games down. So, where do we go from here? I'll be honest, this has gotten long, so I'll follow up with more thoughts next time. In that post, I'll explore ideas around what type of changes to rules, balls, or anything else, might help get the game moving a bit faster, because just about every measure MLB has instituted has not worked. If you have any ideas about what I should dig into further, please share below.