Hi AN! It's been a while since I've written anything here but I'm sort of feeling like a need a bit of therapy after 159 games of this team.

The A's, basically since I started Athletics Nation back in November of 2003, have always been a slow starter followed by typically a furious dash for the playoffs come the second half of the season. It all goes back to Billy Beane's old philosophy of assessing the team first third, addressing the needs in the second third and stepping on the gas pedal in the final third. The team followed that similar script this season and if I'm 100 percent honest, I feel like this year's trade deadline was one of the best ones the team had in the Forst-Beane era. I was talking with Nico over the phone the other day and both of us were marveling at just how fantastic Starling Marte was. If I'm honest, it's partially because I barely pay attention to the National League, never mind horrible NL teams like the Pirates and Marlins. Also, Harrison and Gomes were also quite surprising for me and while Andrew Chafin probably would've been a valuable bullpen piece if he was used as expected instead of as a closer, Lou Trivino's troubles assured that that wouldn't last when the team turned into closer-by-committee.

It's funny because heading into 2021, I thought the team could've won the West again with filling the role of Liam Hendriks with Trevor Rosenthal. The bullpen should've still be good enough to help the offense and good starting pitching that could likely take another step forward. In retrospect, building a team on such a tight budget has become much harder when front offices weren't all that astute at picking up on market inefficiencies. Matt Chapman not being what everyone expected Matt Chapman to be was a painful blow to this team that amplified the loss of Marcus Semien to an 11. And I get it, Chapman had a serious surgery that can basically impact a hitter for an entire calendar year or more before they finally get the proper motion or torque back needed in the hips. Then you lose Ramon Laureano to a bout of stupidity for 80 games when you could've had one of the best defensive outfields the A's might've ever had with Marte in tow.

Here's the thing, before the season started, I said that the A's were a team of ifs. If Matt Chapman rebounds from his surgery nicely and becomes who we all thought he could be, if Matt Olson becomes the monster we expect offensively (despite his really bad 2020), if the bullpen can survive losing another closer, if Elvis Andrus becomes the younger Andrus from the Texas Rangers days, if Jesus Luzardo finally fulfills his potential...well, only the Olson thing became reality. And here's the thing. The A's got some surprises, for sure. Jed Lowrie somehow becomes a different human in green and gold than he is everywhere else. Chris Bassitt became a legitimate ace. Frankie Montas seems to have rounded a corner into becoming an ace as well. The rest of the starting staff was largely up and down. And the bullpen completely fell apart over the last month and a half to two months. Look, lots of teams have ifs. The team across the Bay had every single "if" you could imagine break their way this season and look where they are. The Dodgers and Yankees and even Red Sox don't need as many ifs because they have deep pockets that they're willing to use.

And that's the difference between those teams and our beloved green and gold. I don't know what this offseason holds for the A's. I would assume that the first time this franchise has bumbled and stumbled down the homestretch of a season will lead to some significant changes this offseason. I'm guessing Matt Olson will likely be dealt because his value may never be higher than it is now (and I say that as likely Matt Olson's biggest fan). Chapman likely won't be because it would likely be selling low on him and I can't see the A's doing that.

But I could see a complete overhaul of the team. Bassitt and Montas would likely fetch a very high return right now. Ken Rosenthal and others have speculated that Billy Beane and Bob Melvin might want out (he speculates the Mets would be a perfect fit given Sandy Alderson's connection with Beane). And who could blame them, given the ridiculous constraints that ownership has levied on them.

All of this player movement drama will be set to the backdrop of likely finding out whether or not the team will finally, at long last, get a new stadium built at Howard Terminal. My gut feeling tells me that HT will somehow work out as the team has never been this close to having a new stadium in the East Bay but I can't tell you if that's just wishful thinking. I told Nico this over the phone and I'll repeat it here. If the team leaves to Vegas, that'll be it for baseball for me. I'm not rooting for a team in Las Vegas. I'll always be a Billy Beane fan so wherever he winds up, I'll follow but I can't see myself with the same level of commitment to a team that has no commitment to a community. Rooted in Oakland almost feels like an insult at this point. Dave Kaval is a great example of how you squander away good will and fall from fan superstar to reviled villain faster than Walter White becoming Heisenberg. Maybe if we're lucky, the Mets decide to send John Fisher a billion or so to build HT in exchange for Beane and Melvin (this is a joke - mostly). I'd hate to lose Billy under any circumstance but getting a permanent home in the East Bay would likely be the only exchange I'd be willing to make.

Maybe I'm overreacting and this offseason, the A's actually decide to bring Marcus Semien home for multiple seasons, bring Marte back, fix the bullpen by adding a legitimate closer and take one last swing with the Matts on the corners before blowing it all up? Pffffft, yeah and monkeys might fly out of my butt. Seriously, you saw that John Fisher still owns the team, right? Though if he was to ever to pursue a fan reputation reclamation project, this would be the way to do it. You're reading this, aren't you, Mr. Fisher? I'm giving you some great public relations insight here. You're worth billions, I'm just asking you to spend a bit to take one last kick at the can with this group. I pledge that every AN reader will buy three pairs of Gap jeans if you do this. Deal?!? AN can be known as Harpo too, you know? We gonna harp on you until it happens. Hello? Is there anyone there?

Finally, the one positive I can take from all of this is that, for once, at least I don't have to suffer through October heartbreak again. Yes, I do believe the playoffs are always a poker game but the A's never seemed to possess the right cards at the right time. The hands they dealt were seemingly always worse than their opponents (the exception being the White Sox last year at long last). So while the season, and likely this era/iteration of the green and gold, are coming to a close with whimper and not a bang, I try to take comfort that I won't have to endure the team ripping the tablecloth out from under the dishes with a resounding crash to the floor like so many seasons past. I'm older now (turn 50 in December!) and I'm just not sure my old heart can take that much pain any more.

Speaking of old, can you believe this site is gonna be 18 this November? AN can finally vote. And go to college. 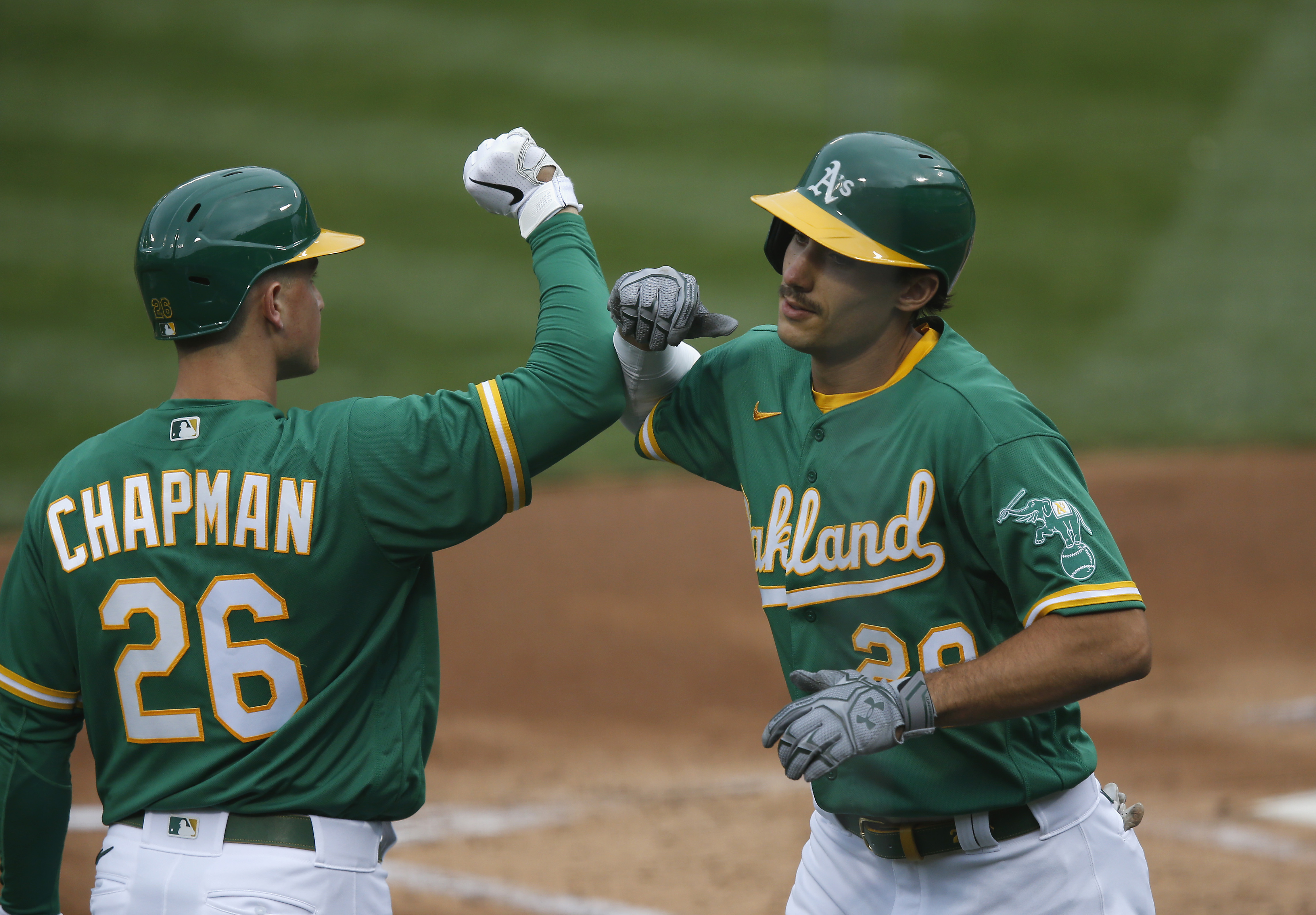 No more "Matts" on corners? Say it isn't so.