The Autograph Hunter, The Circle of Life

Kait says, "There is one o’clock, two o’clock, three o’clock and Ellen o’clock."

On Halloween, Kait and Liv dressed like two kids, Sophie Grace and Rosie, that appeared on Ellen’s show. They mimicked every note, syllable, gesture and facial expression in the girls’ performance.

They made a life size picture of Ellen’s face and torso and mounted it on a stick and called it EOS (Ellen on a stick). They put EOS on top of their Christmas tree. They posted a picture in Ellen sweatshirts, holding Ellen water bottles and crying because "they want to meet Ellen."

Their friends retweeted "#getlivandkaittoellen" hoping it would trend. One friend texted 15 reasons they should get tickets.

In November they requested tickets for the February show. They had not heard back but had memorized the procedure for "same day" tickets.

Kait and Liv arrived two days before the show.

"What else do you want to do?" I asked on the drive home from the airport. "Disneyland, Getty Museum, Venice Beach?"

"You have come to the best place for that. Everyone has a story. A teacher near us found Shaq raiding her refrigerator at 2 in the morning."

The big day came. I drove them to Warner Brothers Studio, Burbank. We arrived 3 hours before seating started.

"We came from Louisiana to see Ellen," Liv said to the lady in line behind us. "We wanted to be first in line for ‘same day’ tickets."

"You don’t have an email confirming you are on the attendance list?" the lady asked. She showed us the email she had received.

"I live 15 minutes from here and have been 4 times. Unless you have been notified within a week of your request and have an email, you are not getting in. I have an extra ticket that one of you could use."

Liv and Kait said, "I am not going without my friend."

"These two young ladies traveled from Louisiana to see Ellen. Do you have an extra ticket you could give them?" the lady asked everyone.

No one had an extra ticket.

A girl arrived to check people in. The first people in line left because they had no email.

"Tickets cannot be transferred," the check in girl said. "I have been doing this for 10 years. Only two people have ever gotten 'same day' tickets."

The ticket girl left. The other people went into the show.

We returned to the car. Kait started to cry. "I just want to go home," she said. Liv teared up.

"Girls," I said, "We are about to spend 9 hours in a celebrity rich environment. You will have plenty of time to cry when we get home tonight. You don’t have to start now."

"Let’s take a studio tour while we wait for a call back. Maybe we can be in the audience for another show."

The tour van stopped so the girls could take pictures kneeling by Ellen’s parking place and standing at the entrance to Ellen’s studio. They hoped Ellen would drive up and greet them.

We saw Simon Baker being driven to his filming. He waved and smiled. The girls swooned and took his picture.

"Have you ever been to In-N-Out Burger?" I said, focusing them on the cure for disappointment.

"People love In-N-Out Burger. They should be open by the time we drive there."

The address for the nearest In-N-Out Burger made me think we would find it near Universal Citywalk. The valet at the Citywalk parking garage advised me that I had misjudged.

"I can give you directions to In-N-Out Burger," he said. "Driving there would be simpler than walking."

He held my key, ready to give it back.

"Ask the restaurant to validate your ticket," he said. "There is no charge for the first two hours. But if you stay longer you are charged for every hour."

We walked through the corridor to Citywalk, a three block open area lined on both sides with shops and restaurants.

A small sign announced that The Today Show would be taping.

The center of the open area had been cordoned off. An open air stage had been set up. Four men sat on stools on the stage. Kathie Lee and Hoda asked them questions.

"That’s Flo Rida," Kait said. "That’s Gilles Marini. That’s Bob from The Bachelor next to him. Is that adult Erkel?"

"Wait by the exit," I said. "Stand a few feet to one side of his expected exit path. When he walks by, call his name one time like you are greeting a friend. If he looks in your direction, hold up your camera and say ‘Picture?’ Or, hold up a pen and pad and say, ‘Could I get your autograph?’ Above all, be polite and respectful. Be prepared for a ‘no’ or to be ignored."

The Valentine's Day interview with the 4 bachelors ended. I rushed ahead of Kait and Liv to the expected exit. But I guessed wrong. Flo Rida exited the other side of the cordoned off area. We could not have been any more out of position. The girls did an about face hurried in Flo Rida’s direction with me 10 feet behind them. Flo and his 10 person entourage disappeared around a curve.

By the time we arrived at the street, Flo Rida had left. His limo must have been waiting with engines running.

Walking back toward the restaurants, we saw Urkel and Bob and their young Today Show escort. The girls approached Urkel and Bob and asked for a picture. They posed for 5 different pictures like they had nothing else to do. 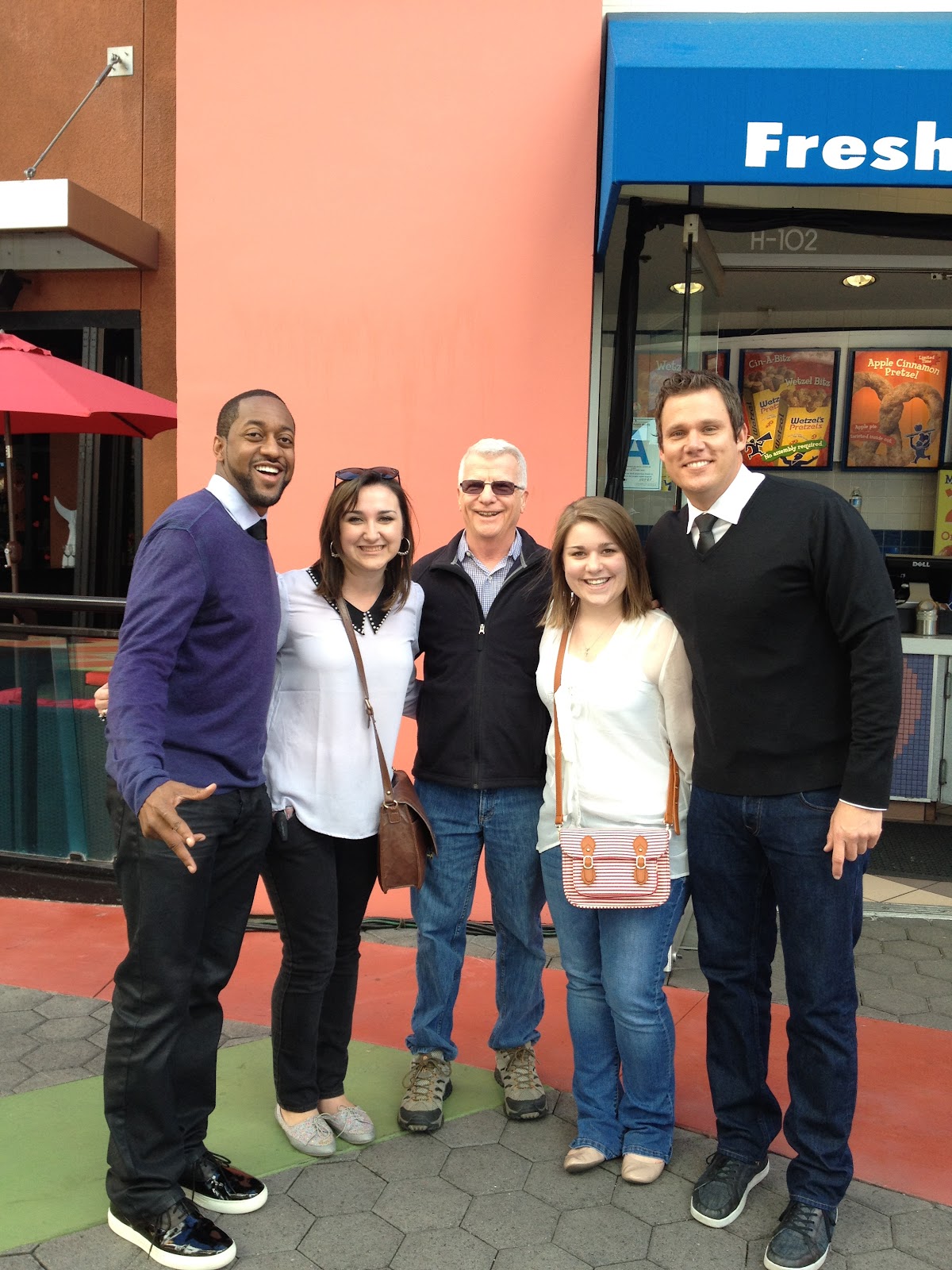 When we had all the pictures we wanted, Kait said, "Thank you so much for being so nice. This is the highlight of our trip!"

"Thank you for being fans," Bob said. "We would not be successful without you."

"Gilles Marini went into that restaurant," Kait said pointing to a restaurant 100 feet in front of us.

We followed. Gilles stood in the restaurant waiting area talking to another man. The girls stopped, not wanting to interrupt. A beautiful, well dressed and jeweled lady sat near the men, listening to them talk.

"Ask her if you could take a picture with Gilles," I said. They rushed to the lady. I watched from 10 feet away. She smiled, nodded her head up and down, said yes and made an "of course" shrug. She said something to Gilles.

He stopped talking, looked at the girls and said, "Hi." The other man moved to let the girls stand on either side of Gilles.

"Could you move to face the light," I asked.

They moved. "Is this better?" Gilles asked.

I focused and pressed the shutter button on Kait’s camera. Nothing happened. No problem. I pressed again. Nothing. "It’s not working," I said.

"Let me see," Gilles said, extending his right hand. I handed him the camera. He focused it on me and pressed the shutter button. Nothing happened.

"You broke it," he said, in faux horror.

(A million comedians out of work in this country, and I get Gilles Marini and Billy Beane. Sheesh.)

"Oh." Kait said. "Sometimes it locks because it does wind far enough." She fixed it. I took the picture.

Gilles spoke a few French words and went into the restaurant with his friends. I half expected him to invite us to join them. 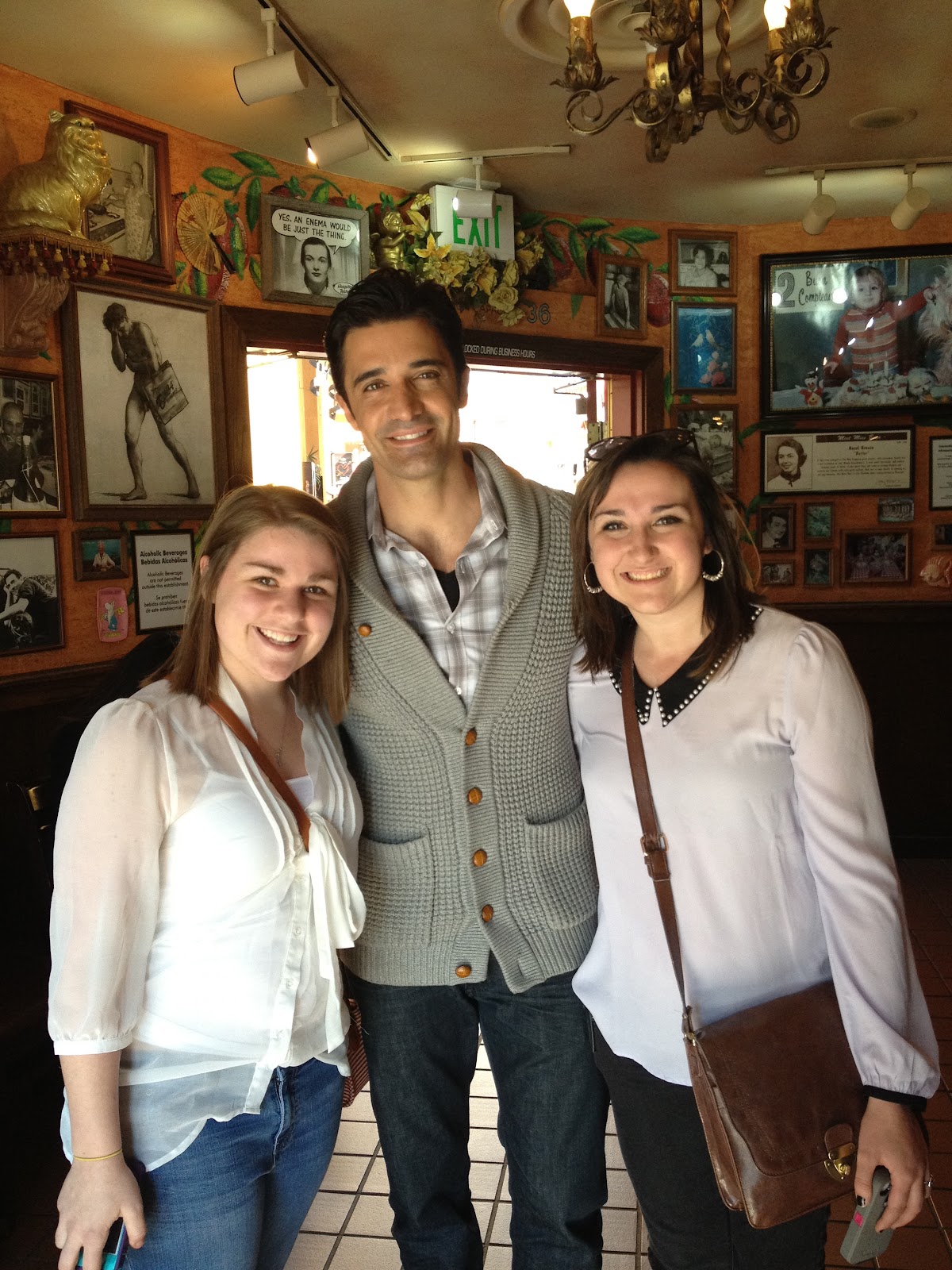 We found a hamburger place and Kait and Liv treated me. They had sweet potato fries for the first time.

When we walked back to the parking garage, the intern that had escorted Urkel and Bob approached us.

"Would you like to be in the audience for the next Today show taping?" she asked. We must look like the people who would watch their show.

Ten minutes later, we sat in folding chairs in the TV show set with 50 people.

This would be worth having to pay for parking.

I moved away from the girls to the shade on the other side of the audience.

The show started. Kathie Lee and Hoda raffled off a trip to Aruba. "That would compensate for missing Ellen," Liv said. We didn’t win.

"This being Los Angeles, you never know what celebrity you might run into," Hoda said. "We have a star in our audience today. She plays Meredith, the loose woman in 'The Office.' Her boyfriend is one of our cameramen. Please help me welcome Kate Flannery." Applause.

Meredith walked to the stage, conversed for two minutes with Hoda, then walked off the stage to more applause.

I watched the girls from the other side of the set. They walked toward the exit in the back. 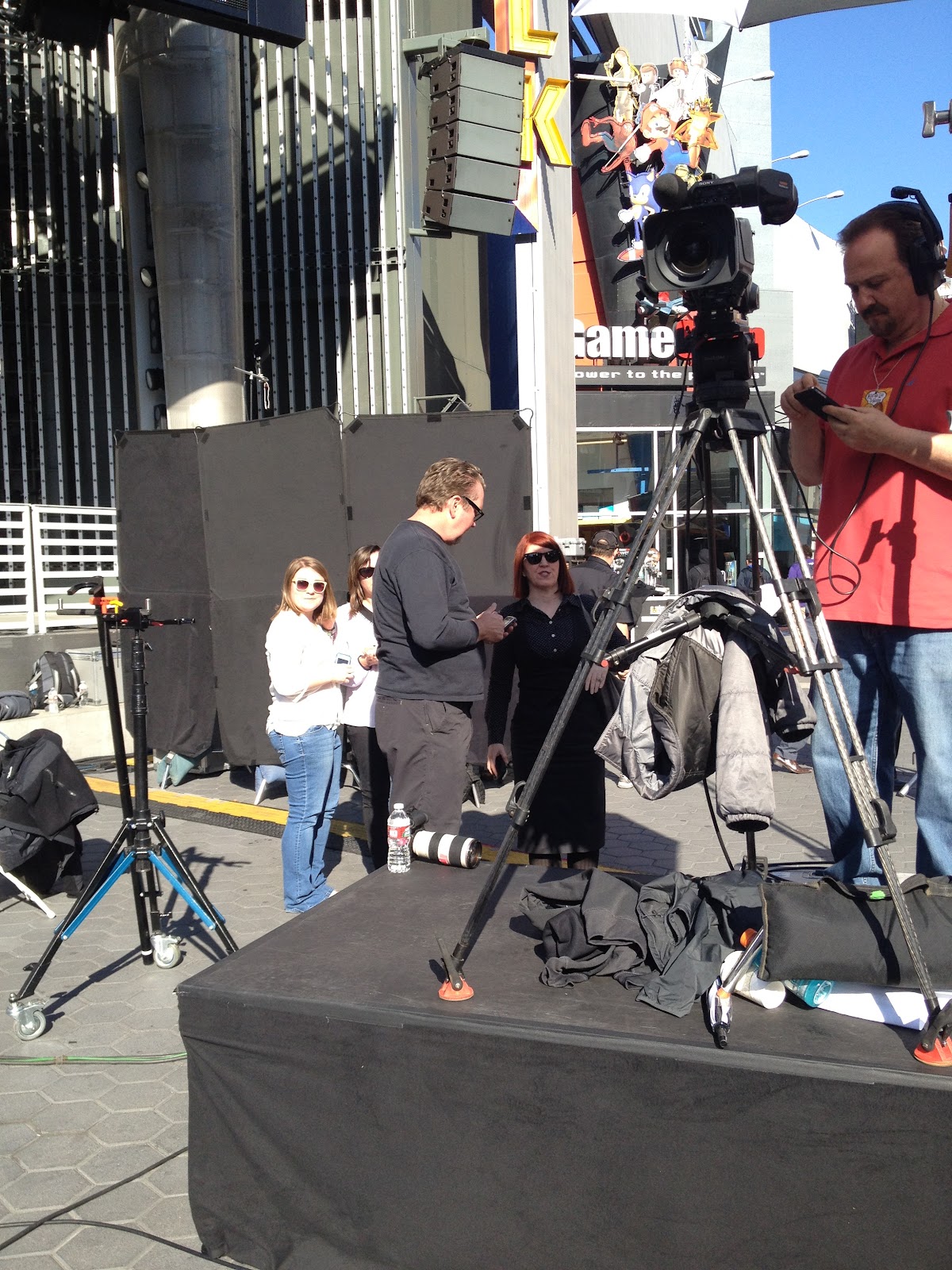 Meredith stopped to talk to a cameraman. The girls waited, close enough to Meredith to be noticed without interrupting her.

Meredith looked at the girls. "Hi. How are you?"

"The Office is my favorite TV show," Kait said.

"Would you like a picture?" Meredith asked. I took a picture of Meredith with both girls, then one with each girl.

"Why don’t you get a picture too?" Meredith asked me. "Come on." I stood by Meredith, avoiding her personal space. "Get closer," she said, staying in character. 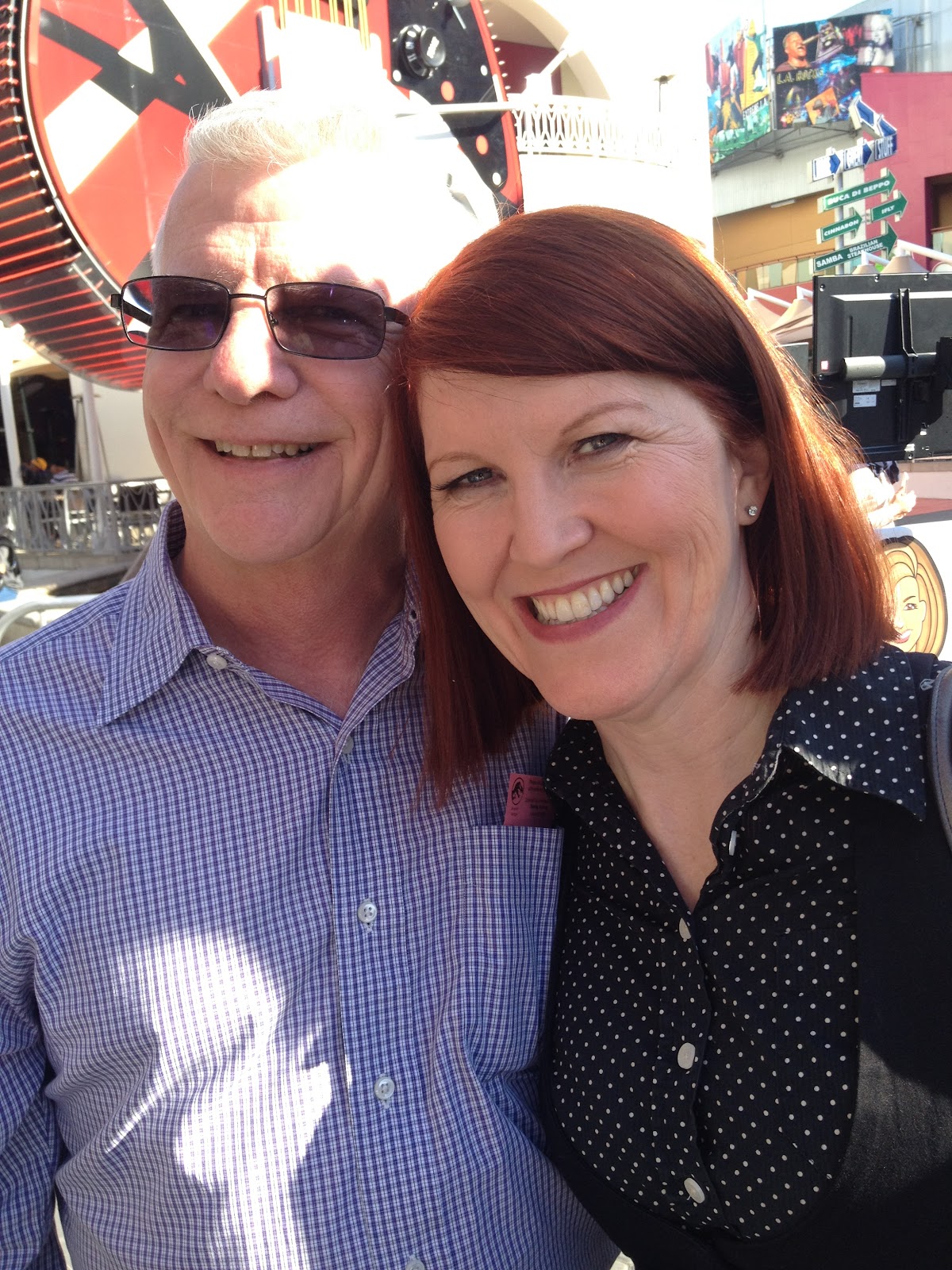 Kait sent the pictures to her family. "Not fair," her brother replied. He never misses The Office.

Six months later, we gathered with our families to watch a video of us in the audience of the Today Show.

"Things I learned in LA: I am blessed with an amazing family, ...Mario Lopez is really short, the best things are unplanned, exploring is fun, ... things don't always turn out as planned, I want my own talk show, Nothing in Hollywood is what it seems- even the people, I look pretty good next to a celebrity considering I'm an average Joe, I laugh uncontrollably around celebrities, how to approach a celebrity (notice I didn't say "stalk"), always persevere for something you want, how a TV show is filmed, Meredith from The Office is just as cool as you think she would be, where Ellen Degeneres parks her car, I REALLY like sweet potato fries, God will deliver us from our clouds, how to work a parking meter, the new Oakland A's victory dance, I adore California, a stand-by ticket is NOT the same as a day of ticket, yelling Ellen's name on the Warner Brothers lot will not make her randomly appear (it will only scare your tour guide), ...Simon Baker smiles funny, Tour buses will always appear 2 minutes after you call and harass headquarters, and George Harrison is the original hipster. There you have it. Lessons learned." 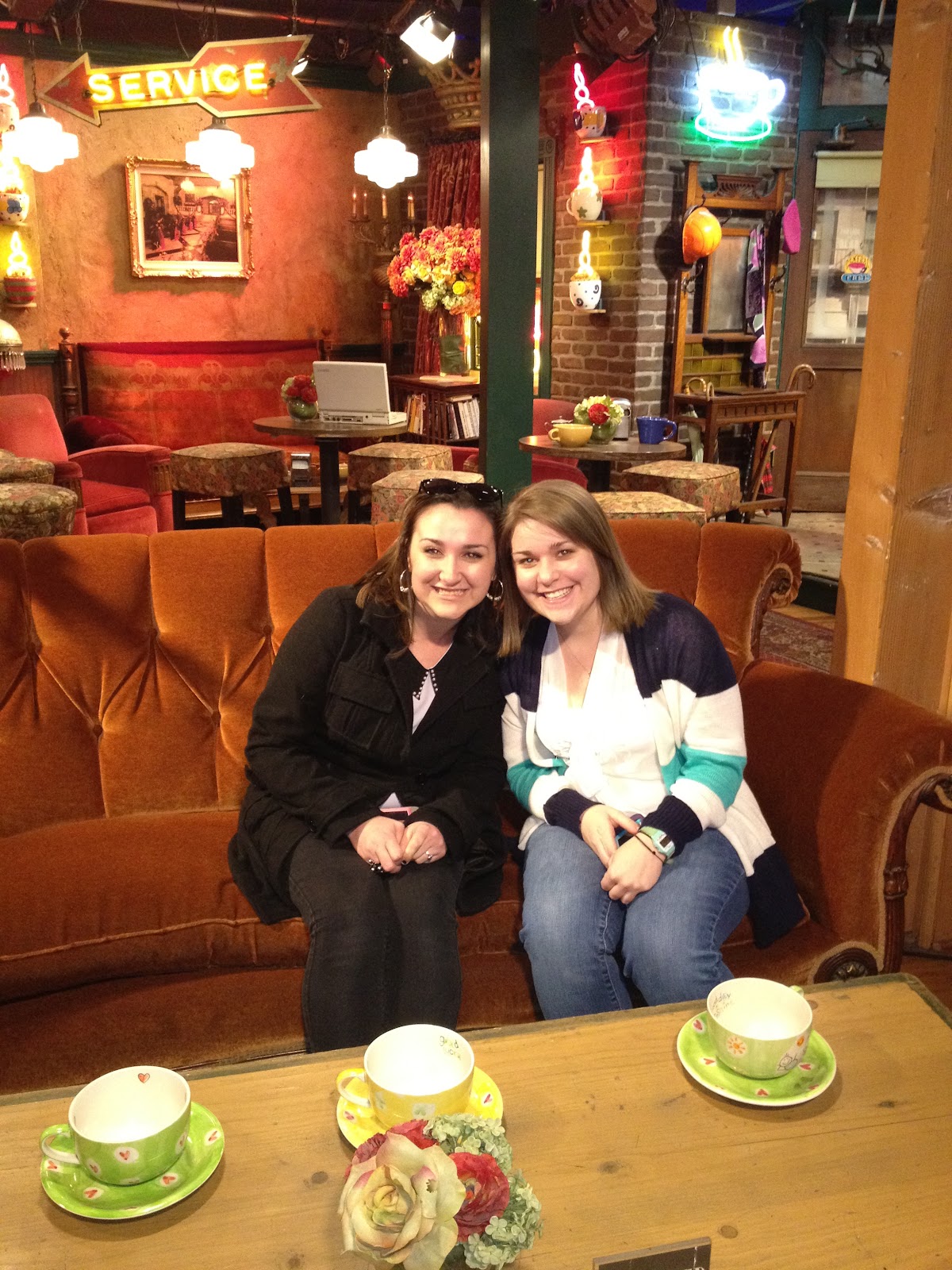 (actually, the set of Friends)

Things I learned from Kait and Liv and Michael Lewis: "Life’s outcomes, while not entirely random, have a huge amount of luck baked into them." https://www.princeton.edu/news/2012/06/03/princeton-universitys-2012-baccalaureate-remarks 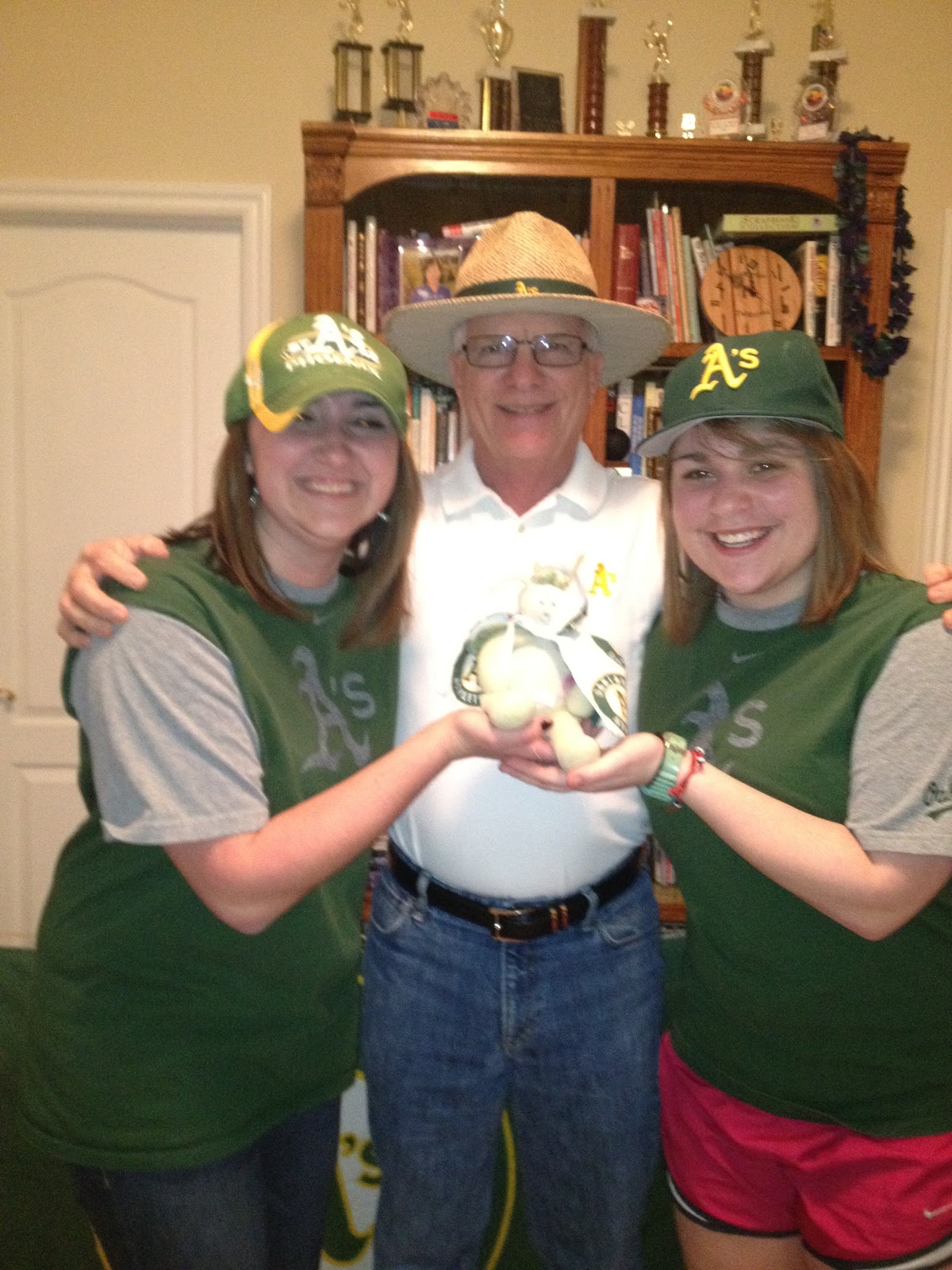 Pictured: Working on Our Victory Dance Project with Flutterbug