The third in a four part series. One fan’s story of getting autographs from everyone in the book Moneyball. Billy Beane appears. You can also go back and revisit Part 1 and Part 2. The complete story can be found at bentherewrotethat.com.

Scottsdale Stadium, Phoenix, March 9, 2007. John Baker (page 40) warmed up with 10 other position players in shallow left field. Since the major league roster did not list him, he might not want to bother with autographs. A young, attractive blonde came up and started talking to me. John Baker bee-lined it over to sign the book. Note to self: friendly young blondes tend to attract young ballplayers.

Tucson, Arizona, March 10, 2007. Paula and I drove for two hours to attend a spring training game between the Athletics and the White Sox.

Paula had not yet discovered The World’s Greatest Shoe Store in Phoenix. Watching her shoe shop could top watching any sporting event. But that's another story.

Not every Oakland player made the bus trip from Phoenix to Tucson, reducing the autograph candidate pool.

To add to the challenge, the newer Tucson ballpark made asking for autographs difficult. A 10-foot chain link fence separated the fans from the players entering and exiting the stadium. Players had to walk out of their way to interact with the fans on the other side of the fence. This did not look promising, so we continued into the stadium and took our seats an hour before the game.

Before a previous game, Brandon’s wife and baby sat near me in the stands. The baby cried when he saw his dad standing on the field.

"Did I hear Barry Bonds," I cracked. Brandon and a couple of others chuckled.

I had not asked Brandon for his autograph. I didn’t realize the book mentioned Brandon until I read an Athletics Nation blog post that featured him. The post parodied Hunter S. Thompson’s Fear and Loathing in Las Vegas. It had Buckley driving the "white whale" to Spring Training for some urgent reason.

Finding the page with Brandon’s name, I waited for him to finish catching and walk back toward the dugout. When he did, I walked down the stands to a six-inch opening where two fences met. His path would take him close to that opening.

"How’s your son doing?" I asked, as Brandon got close.

Brandon agreed to autograph the book, and I handed it to him through the opening. He signed by his name as I took his picture. He's not a player, so no one else asked for his autograph and no crowd gathered.

It may be the only autograph he has ever given.

After the game, A.J. Pierzynski came to the fence outside of the players’ exit and signed. But he’s not in the book, so I passed. As we walked to our car, I saw the A’s reserve third baseman in street clothes. He posed for a picture with me. The A’s cut him a few months later.

I don't remember anything about John Rheinecker’s autograph (page 40). Maybe he signed autographs near me and I took a chance that the book mentioned him on the same page as other young players. It doesn’t.

I might have all of the autographs that I would get. Each autograph took time and money. I didn’t have enough of both to get all 200 plus people in the book to sign it. At least one had died, and others had left the team.

I put my project on hold. But my fascination with the Oakland A’s continued to take me to unexpected places.

My Office, December, 2009. Manager Ken Macha’s contract expired, and his agent announced that he had submitted a salary proposal to the A’s. The agent said that he expected Oakland to reject the offer as too high and that then the two sides would negotiate a salary.

Billy Beane announced that Ken Macha would no longer be the manager of the Oakland A’s.

Beane said that when two parties are so far apart on the expected salary, there is little chance they will reach an agreement that makes both of them happy.

An employee’s contract expired. He wanted to be paid twice as much as the finance chairman thought we could pay. I announced that the employee would no longer be an employee because we were too far apart on the expected salary to come to an agreement suitable for both sides.

Following Billy Beane’s example, I believe, resulted in the best outcome for everyone.

Phoenix Municipal Stadium, March 4, 2011. When I retired, my coworkers revived my autograph hunts by giving me tickets to four spring training games. They also gave me a stop sign and a crossing guard’s vest at Paula's suggestion. Damn, I loved working with those guys.

Before the first game, I staked myself out where the visiting team would exit their bus. Back then, temporary barriers separated the fans from the players when they walked from the bus to the players’ entrance.

30 people gathered. We waited. Two hours later, the Texas Rangers’ bus stopped and the door opened in front of me. Players stepped off the bus one at a time. A few stopped to sign autographs. I ignored them.

Twenty players exited before Texas Ranger manager Ron Washington, my target. Wash stopped three feet in front of me, face to face. He looked to his right at a couple of his players signing autographs. "Coach Washington!" I yelled. He turned to his left and walked into the stadium without acknowledging anyone.

I respected that high level competition demanded focus and that signing autographs would be a distraction. Wash would probably not see himself as an autograph target like a famous player.

I went to a shady part of the stadium and relaxed.

An hour passed. Not wanting to leave my seat during the game, I bought a pretzel. The nearest condiment station was in the sun and I didn't want to get out in the sun.

I walked toward a shaded condiment station. My path led me closer to the building that an usher said contained Billy Beane’s office. I had considered asking the two security guards outside the main entrance if they could help me meet Billy.

I had looked at the building several times, but there wasn’t much to see. Once, I scanned the building with binoculars from my seat in the stands. Beane sat in his second-story office with his leg propped up on his desk watching the game.

Beane’s willingness to make decisions based on evidence instead of conventional wisdom reminded me of Galileo. When Galileo proved that the sun, not the earth, was the center of the solar system, the authorities arrested him. Experts had ridiculed Billy but at least he had not been arrested.

As I approached the mustard dispenser, my eyes glanced in the direction of the Oakland A’s spring training facility.

My pretzel would have to wait for its mustard.

I walked toward him and stopped close enough to be noticed without interrupting.

A minute passed. They stopped talking. Billy looked at me and said, "Hi."

"Are you Billy Beane?" I asked.

"I *am* Billy Beane! Did you bring me a pretzel?" he exclaimed with exaggerated enthusiasm.

"You can have it if you want it. Can I get your autograph?"

I slipped off my backpack and took out the book, Moneyball.

Billy, trying to be funny: "Do you carry that book around with you everywhere you go?"

Me, also trying to be funny: "Only for the last seven years."

I turned to page 17, where Billy throws a chair through the wall, my favorite part of any book.

It had inspired me to tell my boss, "The only way to stop our program’s overspending is to throw a chair through the wall."

I handed Billy the book and a pen.

"Could you write my name, Ben, and, what motion you used to throw the chair through the wall?"

Billy looked up with my pen in one hand and the opened book in the other. "I did not throw a chair through the wall. That's inaccurate. Michael (Lewis, the author) was not there that day. I kicked a chair but it didn't go through the wall."

"Oh." Pause. "Could you just write down what happened."

Billy printed, "Ben, didn't go through wall," and signed "Billy Beane." He closed the book and handed it back.

"Does your daughter think you are cool now that Brad Pitt is going to play you in the movie?"

"Oh, yeah. Billy and Brad are like this," Billy’s friend said, holding his middle finger and forefinger together.

"I need to call Michael [Lewis]. I have not talked to him in a while," Billy said.

"By a broker that made millions selling questionable financial instruments. Michael belittled him in his latest book, The Big Short.

"Is Scott Hatteberg around? I would like to get his autograph."

"No." Billy said. "Scotty left last night. He will be back at the end of the month."

"I will try again the last weekend in March." (My coworkers had given me tickets for that weekend.)

"Thanks," I said, extending my hand to shake.

Billy looked at my hand, then looked back at me, then shook my hand.

In the movie Moneyball, Brad Pitt goes into Peter Brand’s (actor Jonah Hill’s) office on Peter’s first day in Oakland. He welcomes Peter. Peter extends his right hand to shake. Brad Pitt looks at Peter’s hand, then back at Peter, then shakes. Brad Pitt does a perfect imitation of Billy’s "look at hand, look at person, shake hand" mannerism.

Beane’s friend took a picture of us that did not show Billy’s famous sandals and shorts. Bummer. It’s my Facebook picture. I texted the picture to friends and family with the caption, "Billy and me."

I got lucky thanks to the generosity of others. (And mustard.) 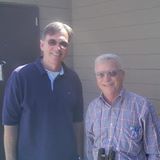 Pictured: Billy and Me.
This ends part 3 of 4 of "The Autograph Hunter," an account of my experiences getting autographs from the people mentioned in the book Moneyball. In Part 4: face to face with a person who lost his job; cosmic significance of autographs. The complete story can be found at bentherewrotethat.com.