Los Angeles International Airport, 2003. I read a comment about Cecil Fielder’s weight and laughed. My wife, Paula, looked up from her newspaper and turned her head in my direction. I read the words that produced my laughter. She smiled, then continued reading her newspaper.

Forty-five minutes later I said, "I am going to get every person in this book to autograph it. How often do you read a bestselling book about people who are alive and walking around?"

Paula looked at me again. "Good. You need a hobby."

I had never asked for an autograph. I had no idea how to find these people. What would they do if I found them? This is what happened.

Edison International Field, Anaheim, California, September 16, 2003. I stopped at the book store and bought another copy of Moneyball. Getting Chad Bradford’s autograph on page 217 would occupy my thoughts for the two-hour drive to the Los Angeles Angels’ ballpark.

No one thought Chad could get major league batters out. He threw slow pitches with an underhand motion that no pitcher used. Oakland General Manager Billy Beane used data to go against conventional wisdom. He traded for Chad because a high percentage of his pitches became ground balls. Chad gave up fewer runs than most major league relief pitchers.

I loved Chad’s story because I felt undervalued. Most of us do. For us, there are the Oakland A’s, a team that used undervalued players to win the most games in baseball over a 5 year period.

I felt like I did when I called my first date or my first stock broker. Autograph hunters or security guards might block me. Chad might not sign autographs. But the Angels’ website provided information for autograph seekers, so at least I could try.

I walked into the stadium and saw a player signing autographs. I rushed to the railing to get him to sign on the inside cover of the book. Jeremy Fikac’s autograph broke my rule that only people mentioned in the book could sign it. But now I knew that you could find players who would sign autographs.

Moving close to the field was easy back then, or I might have given up. Now, only a ticket gets you close.

Nearby, a player on the field talked with a friend in the stands.

"Is that Ricardo Rincon?" I asked the friend.

"Could I get his autograph?"

The friend and Rincon exchanged a few words in Spanish. "He said he will sign after the pre-game warm up."

Later, Rincon signed my book on the inside cover. My excitement prevented me from finding the best page (215) for him to sign. He read the book for a minute, looking puzzled. 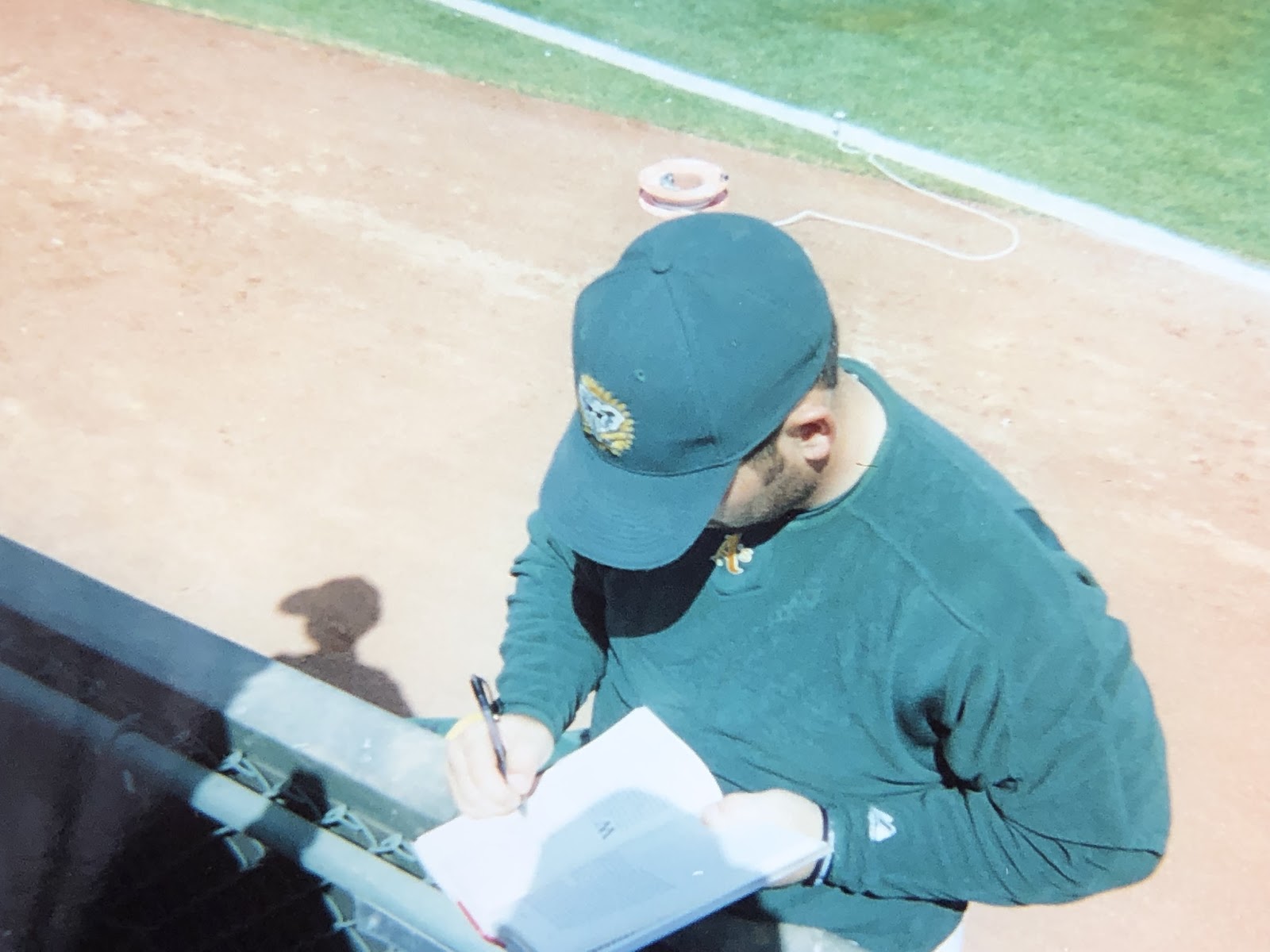 Autograph seekers lined the rail along the right-field line. It looked like Chad Bradford might be among the players in right field. I could not be sure because prior to the game, there are no names or numbers on player jerseys.

Someone screamed, "Chad!" and the player walked toward us.

I fumbled with the book, my pen and my camera, and asked Chad for his autograph. He acted like the person the book described: embarrassed by the attention. He asked where he should sign. Then he posed with the open book, looked up at me, and waited for me to take a picture. 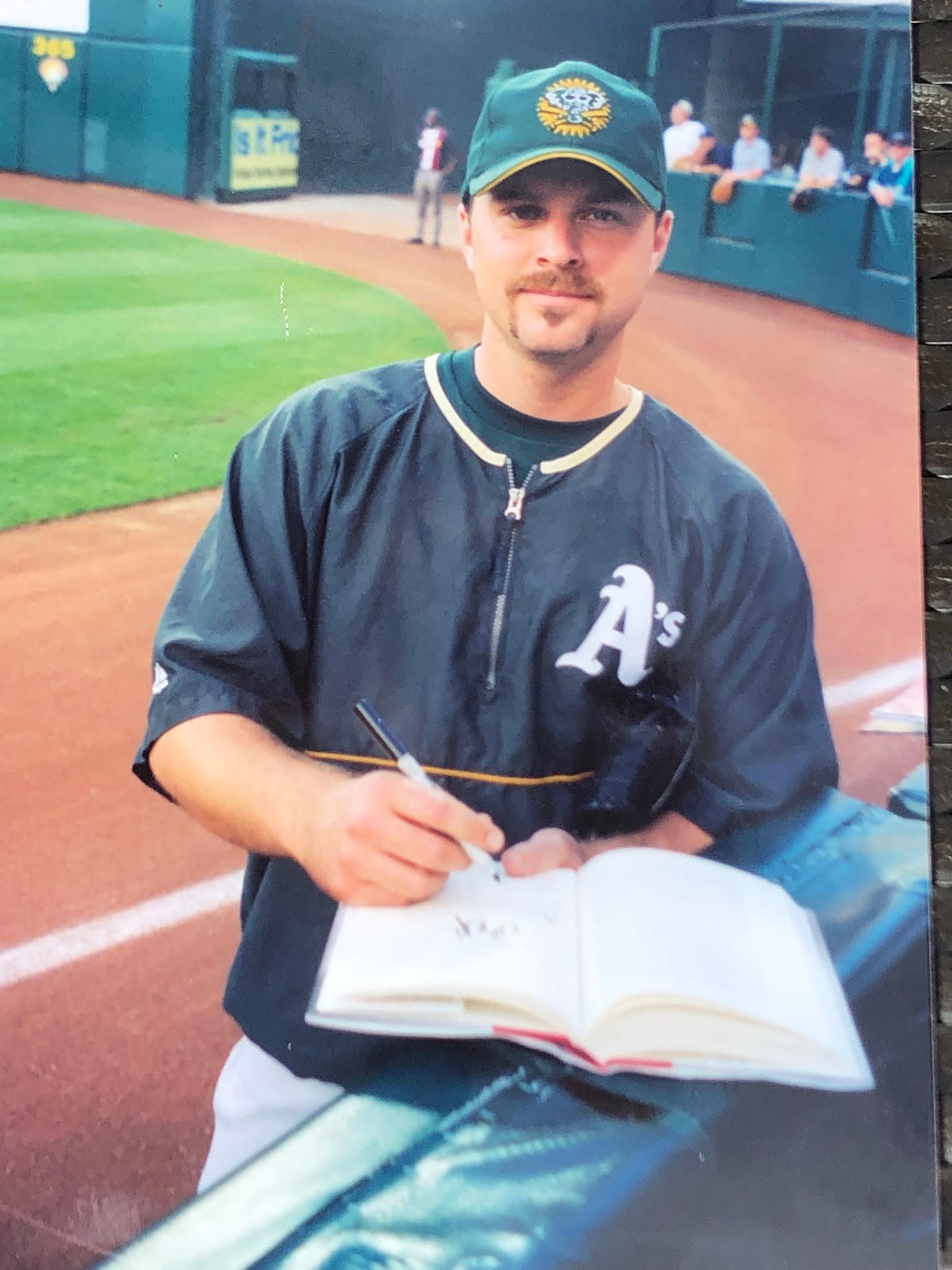 Later, a blob of mustard dripped from my hot dog to the pages of my new book. A yellow stain remains. After that, I kept the book in a clear, plastic bag. But mustard would play a role in my favorite autograph.

Rincon and Bradford both pitched that night. Neither gave up a run. Rincon struck out Adam Kennedy on a full count called strike with the bases loaded. The A's lost on a walk off three-run home run.

But I had Chad Bradford’s autograph and a picture. Success hooked me like hitting a good golf shot hooks a golfer.

The Hangar, Lancaster, California, September 20, 2004. The A's Double-A team, the Modesto A’s, traveled to my then hometown to play the Lancaster JetHawks for the California League Championship. The book mentions two Modesto players.

About 10 spectators entered the stadium when the gates opened an hour before game time. The A’s trickled onto the field individually and in small groups. They walked by me near the far left field line, their names and numbers visible.

John McCurdy (page 40) walked by. I showed him the book and said, "Could I get your autograph?" He stopped.

I opened the book to the page that mentioned him and handed it over the waist-high fence. He signed and wrote his number, #43. According to the internet, players write their numbers because their autographs are not legible.

A few minutes later, Brian Stavisky (page 40), the league MVP, walked by me toward the dugout. As he signed the book, I asked, "Do you think Billy Beane will be down for the championship game?"

"That would be nice, but I doubt it."

Billy Beane did not attend the game. I know because I used binoculars to look at every person in the stadium twice.

A previous game had ended with a play I had never seen before and hoped to never see again. The ball hit the catcher’s mitt a millisecond after the base runner crashed into the catcher. The catcher, John Suomi, held on to the ball but could not make the tag until after the runner, Reggie Abercrombie, touched home plate. Suomi struggled to stand and then collapsed with a severely damaged knee.

Two nights later, the Modesto A’s won the championship. Suomi threw down his crutches and rode piggyback onto the field to join the celebration scrum.

3. I Strike Out at My First Spring Training Game

Phoenix Municipal Stadium, March 20, 2005. Three hundred fans waited for the San Francisco Giants' bus before the game. 30 fans would be waiting for any other teams’ bus.

An old Air Force friend, Joe, drove up from Tucson. As always, he brought two peanut butter sandwiches for lunch.

We bought standing room only tickets. People sat on the grass berm behind the outfield. The Giants drew more fans than any other team in Phoenix.

"That looks like sports reporter Peter Gammons (page 200)," I said. "The tall, gray headed guy in normal clothes behind home plate, talking to players and coaches before the game."

Before I could say, "I think he’s in the book," Gammons turned in our direction and walked up to the stands. I searched for the page that mentions him, then trotted after him, open book in one hand and pen in the other. He had disappeared into the crowd.

Unprepared autograph hunters miss opportunities. Before my next trip, I created an index of the 25 people I most wanted to meet.

I scanned the seats behind home plate with binoculars hoping in vain to see Billy Beane.

The A’s won, 22-0, and Eric Chavez hit a grand slam in the first inning. I took a picture of the scoreboard to show a Giants fan at my office.

A few weeks later, a Fortune magazine article listed Moneyball in an article titled "The Smartest Books We Know."

"Barnes and Noble might shelve Michael Lewis’s Moneyball in the sports section, but it has more to say about investing (and hiring) than any consultant's text," Jerry Useem wrote (Fortune, March 21, 2005).

I felt validated and encouraged.

4. Breast Cancer Awareness and I Support Each Other

McAfee Coliseum, Oakland, California, August 21, 2005. For my first trip to the A’s home stadium, I landed in Oakland the morning of the game. A shuttle bus took me to the Coliseum. Thirty minutes after my plane landed, I stood in a line waiting for the gates to open. Several hundred autograph hunters would be ahead of me.

A business handed out free Oakland A's beach towels as a promotion.

When the stadium opened, a crowd four people deep stood between me and the dugout. No one could penetrate that mob to ask for an autograph, so I walked toward my seat. At least I had a free Oakland A’s beach towel.

An announcement blared over the public address system. "Today is Breast Cancer Awareness Day at the Coliseum. If you donate $20 to the American Cancer Society, you can get a picture of you with a player autographing something for you. You can choose one of two players."

The book mentioned one of the players, Barry Zito (page 221). One person paid their $20 before me.

Before the game, the contributors formed a line on the field, parallel to the first base line, facing a table with two chairs. We wrote our name, line number and email address on a list. The A’s staff would email me the picture of me sitting next to Barry as he signed the book.

An official escorted Barry to the table. One person was in front of me, a girl wearing high socks. Barry said, "I like your socks," as she walked to the table.

As I approached the table, I said, "Thanks for doing this."

He smiled. "No problem."

I sat down and showed him where to sign the book.

"I want it to look like I am giving you advice on how to throw a curve."

He stared at my left hand doing an imitation of a curve ball grip, as I pointed to it with my right hand and pretended to be explaining something important. The picture would make a great screen saver, but I never received it.

I bought Paula a white baseball cap with a pink "A’s" on the front. She loved pink ribbon items. She would chair the local "Relay for Life" twice and raise twice the goal both times. She survived breast cancer for 18 years. She wore the hat to two games.

We stayed at the same hotel as the players, but if I saw one, I wouldn’t know. I would know Billy Beane because I looked at his picture before attending an Oakland event.

We rode up in the elevator one night with three polite young men. They looked too young to be professional baseball players. Not wanting to be the ‘country boy come to town’ that I was, I didn’t ask.

The package included meeting A’s announcer and former player, Ray Fosse. He autographed my ticket to the game. But the book didn’t mention the A’s players scheduled to meet with us.

The package included a baseball. A player from my hometown, Todd Walker, played for the visiting team. Maybe he would autograph the ball.

I stood at the fence along the left field foul line and looked for Todd among the 10 visiting players warming up.

Either Todd didn’t hear me or he ignored me. I still have the ball that no one autographed.

I should have yelled, "LSU." "Bossier City." "Airline High School." "Cope Middle School." "Stockwell Place Elementary School." (I guessed at the last two because my niece went there.)

I now live in the same city as Todd, and we both play tennis. I met his wife and told her the story. She wanted Todd to autograph the ball but I don’t carry the ball around with me.

Four times people from my home state of Louisiana ignored me when I asked for their autograph. No one else has ignored me.

Paula’s Christmas present would result in 5 autographs. "I don’t give up," she said every time I wanted to give up.

This ends Part 1 of 4 of "The Autograph Hunter," an account of my experiences getting autographs from the people mentioned in the book Moneyball. Stay tuned for the next episode, coming soon! The complete story can be found at bentherewrotethat.com.