Perhaps a little light will be shed on Nico’s conundrum today as lefty Jesus Luzardo takes the mound to face off against fellow southpaw Drew Smyly; at least for the first few innings of the 11th Cactus League game for the Green and Gold. While the conventional wisdom definitely sides with the idea of keeping Luzardo in the minors until the team accrues another option year, the argument can be made that you can’t keep a good man down (in the minors) and Jesus Luzardo certainly appears to be one. Youth is usually a good thing in baseball and I can’t help but consider that the best runs of A’s success in my lifetime (I missed the 70’s) have been when we’ve had a Rookie of the Year on the team (Canseco-McGwire-Weiss, Grieve, Crosby-Street, Bailey).

Luzardo has been lights out in his three innings of work this spring: the 21 year old has yet to allow an earned run while registering 4 strikeouts against 1 walk, known as a 4:1 K:BB ratio. Said ratio for an entire career would be the 4th best by a lefty to ever step on the rubber and 13th best in MLB history, right behind former Oakland Athletic Dan Haren. I know, I know, it's spring, he’s barely played above AA ball, & it's just 3 measly innings against expanded rosters, but like I just said, it is spring, so drooling over potential and daydreaming about a ROY Ace leading Oakland to October glory are absolutely appropriate. I’ll check in with reality on Opening Day. Until then, the kid gets his own paragraph.

The most interesting thing about the poorly named team from Texas is a growing trend of players adopting animals with which they share a moniker. Ronald "the Condor" Guzman has sponsored an endangered California Condor and Joey Gallo has done the same for a baby kangaroo, which is called a joey. Despite their lack of creativity, this may be the best thing either does all season amidst a rebuilding effort for the AL West’s 2018 cellar dweller. To be fair, the World Wide Fund for Nature (formerly the World Wildlife Fund) is a worthwhile cause.

From a baseball prospective, Arlington's new starter Drew Smyly deserves a look. After being stretched out into a starter in 2014 following a respectable 2.37 era, 21 hold season as a reliever for Detroit in ‘13, Smyly underwent Tommy John surgery after his subpar 4.88 era 2016 season and hasn’t made a meaningful appearance since. This is a low-risk, high-reward type move ideal for the rebuilding Rangers and Smyly will have plenty of opportunities to prove himself over the course of the season as the presumptive 4th starting pitcher. I’d give you more about the rest of the roster, but it’s the Rangers, and who cares?!?! Most of their best players will be wearing different uniforms by season’s end.

Today's A's lineup appears to resemble a regular season lineup minus Khrush, who is still recovering from injury. I'm eager to see just how much of an on-base machine Grossman (LF) is and if he can do so from the lead-off position. The front office would not have further crowded the outfield if Grossman wasn't worthy of consideration. I'll give him until May as I've always felt the lead off position is the toughest to fill in Oakland given the legacy of Rickey Henderson. After Grossman, even casual fans will recognize most of the lineup with Chapman occupying the 2 hole and the rest of the regular starters appearing on today's card.

Piscotty (RF) batting 3rd makes me nervous, but if he continues to improve on his breakout 2018 season, this lineup just got very scary. New arrival Jurickson Profar (2B) bats fifth after Gold Glove, 162 gamer Matt Olson (1B) cleans up and it will be crucial for Profar to produce and provide protection for those in front of him. Marcus Simien (SS) bats sixth and needs to play well enough during the final weeks of spring to hold off the budding excitement about Jorge Mateo. Ramon Laureano (CF) looks to continue his development batting 7th. He can set the table for the bottom of the order and provide super-utility man Chad Pinder (today's DH) and new catcher Chris Hundley a chance to demonstrate they're more than just defensive assets. With the A's heading to the Land of the Rising Sun next week, it'd be nice to see 3 at-bats from the presumptive starters. 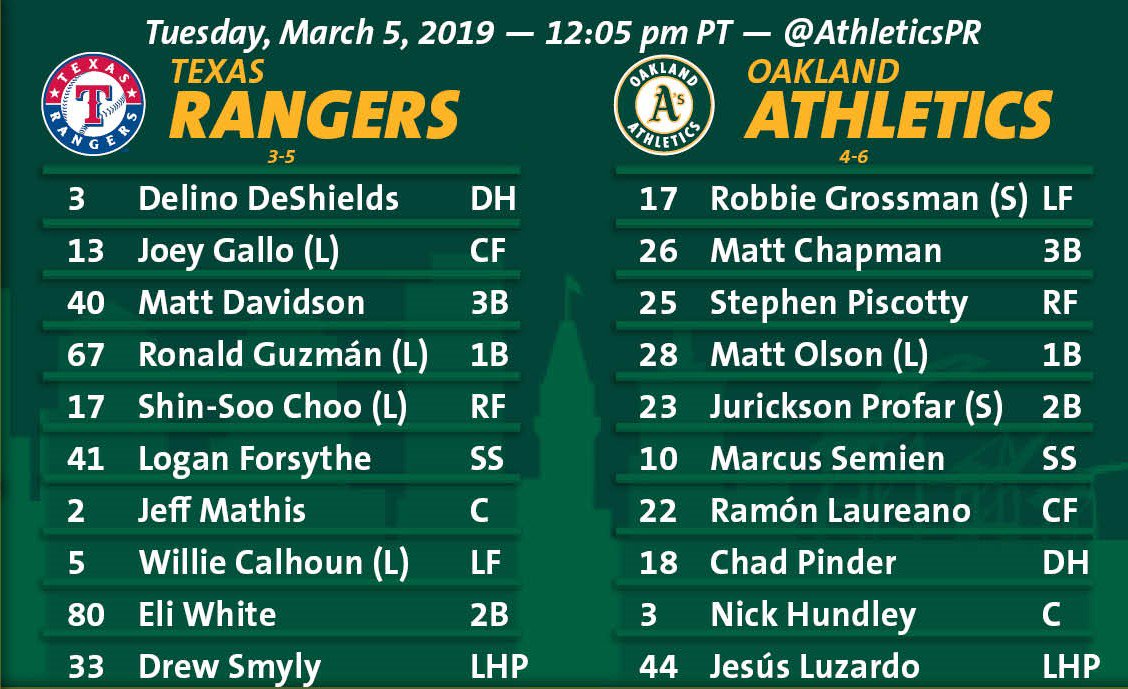