One of the bright spots in this year of doom has been the recent play of Matt Olson. He is hitting the ball really hard. In 50 games he has 18 home runs and an isolated slugging of .364. Really quite remarkable considering he spent the first half of the season racking up frequent flyer miles between Oakland and Nashville. Honestly, that is a testament to Olson’s makeup that he was able to roll with that. Nice job 28.

So what’s changed with Olson? Entering the season, Olson’s stock had been slipping after a downward trend in production in the minors and a lackluster debut with the big league club in 2016. Last offseason I wrote a breakdown on Olson with the projection being "pessimistically optimistic" on his future. I loved the power, but one thing about his swing gave me concern.

Basically I was concerned that Olson’s swing path was a little too flat. As he initiated his swing, Olson had a tendency to let the barrel fall behind him. Let’s revisit his first MLB hit to show you what I mean.

Now here is the frame I am talking about. 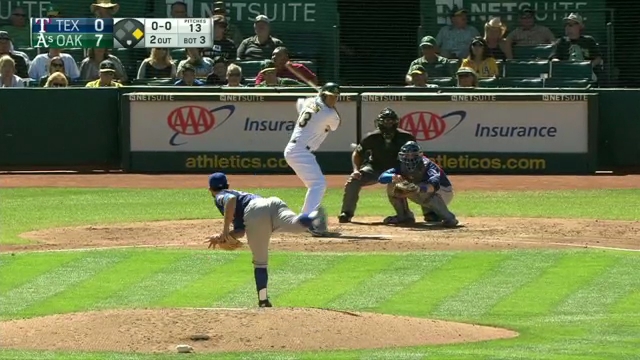 This bothered me for a few reasons. First, by getting the barrel flat early, the barrel has a tendency to sweep through the zone like a merry-go round. The results are a lot of pull side grounders (because the barrel is working around the ball) and whiffs on low pitches. Second, Olson needless to say is a taller dude, so having a swing geared for high pitches with a historically low strike zone isn’t the best plan of attack.

My hope was over the offseason Olson would tilt his swing plane more like a Ferris Wheel, staying more upright as it enters the zone. With less horizontal circular momentum, Olson could get to the low pitches better and stay on the pull side contact better. Take a look at one of the better Ferris Wheelers (and also tall guy JD Martinez) and note the differences in how the barrels attack the ball.

Let’s fast forward to 2017 and take a look at one of Olson’s home run swings.

Then as Olson initiates his swing - what do you know - the barrel doesn’t get trapped behind him and it stays in a much more direct plane to the ball. The result is a shorter, more upright swing plane.

Let’s look at the crux of Olson’s swing comparing 2016 to 2017. Way better. Also go back and watch the videos and see how Olson is finishing swing higher - indication of a more vertical swing path.

Is that it? Is Olson fixed forever? Did Olson read my post and now owes me a lot of money? I don’t know. As a guy who preaches the importance of swing mechanics and gets excited hearing about swing change success stories I for some reason am a little more reserved in excitement on this one. I would love to hear that Olson made a conscious change to a problem he saw and now knows what he has to do to perform. I haven’t read that yet, but that doesn’t mean it isn’t true. Maybe it is the inflated offense numbers this year is giving me pause. I’m not sure. Just not sold yet with the 38.3% HR/FB rate staring right at me.

I would also like to see some more results against big time fastballs. A quick go through his home run videos this year is a lot of blasts against off-speed offerings. I would like to see a few more swings against heaters to make sure he can make good swings against those. Against offspeed you have to buy a little time with the barrel, so the deepness of his old swing wouldn’t hurt him as much. But against big time heat, getting the barrel back there stuck makes things difficult. I just want to see some more evidence the new swing won’t break down when time is shortened.

Taking a really deep dive into Olson’s small sample size shows that his xwOBA is a more realistic .372. For those not familiar with xwOBA, it basically takes all the fun out of the game by calculating what your production should be based on how you hit the ball (launch angle, direction, etc.). Just kidding, I like it. What’s interesting about Olson is that his real wOBA is 40 points higher than his xwOBA, indicating he may be on a lucky roll right now. This is especially true considering xwOBA doesn’t take into account park factors and the Coliseum suppresses offense. If you look at the xwOBA of the A’s, they are all "underperforming" with the exceptions of Olson and his fell Matt Matt Chapman. (Which doesn’t speak well for Chapman either, considering his real wOBA isn’t anything to write home about.) The good news is Olson’s xwOBA is still pretty good, right inline with Khris Davis (and Yonder Alonso for that matter) so he has been hitting the ball well.

What does Olson’s future look like? If I let my imagination run for a minute I think of JD Martinez again. Martinez was basically out of league until he rebuilt his swing to be more like a Ferris Wheel and now he is awesome. So Olson is basically a younger, better-at-defense JD Martinez. Haha. I won’t go that far. My hope is that Olson is aware of what made the difference for him, whether it be this swing change or something else. That way when things go bad he has a reference to go back to recalibrate. I’m a lot more optimistic of his future than I was this time last year, now removing the "pessimistic" from my optimistic projection.