Last in prospect analysis is Austin Beck. Beck is a prep prospect hailing from Arcadia, North Carolina. He stands in at 6’1" and 190 lbs. Beck throws and hits right-handed.

Here are a couple scouting videos on him.

The reports on Beck are largely glowing. The only knocks on him are the typical concerns over competition at the high school level and any remaining issues over an injury that cost him the opportunity to play last summer. The latter seems to be a very minor concern, as he is back this spring and crushing the ball. Let’s take a look at some of his swings starting with some BP hacks.

Beck has a really nice swing. In the film I saw on him he showcased several stride variations and moved throughout all of them very well. Beck gets his hands a little high during his load, but does manage to work under the ball really well. With the high load and very large stretch across the torso, Beck reminds me of Mookie Betts. Here is the frame I am talking about. 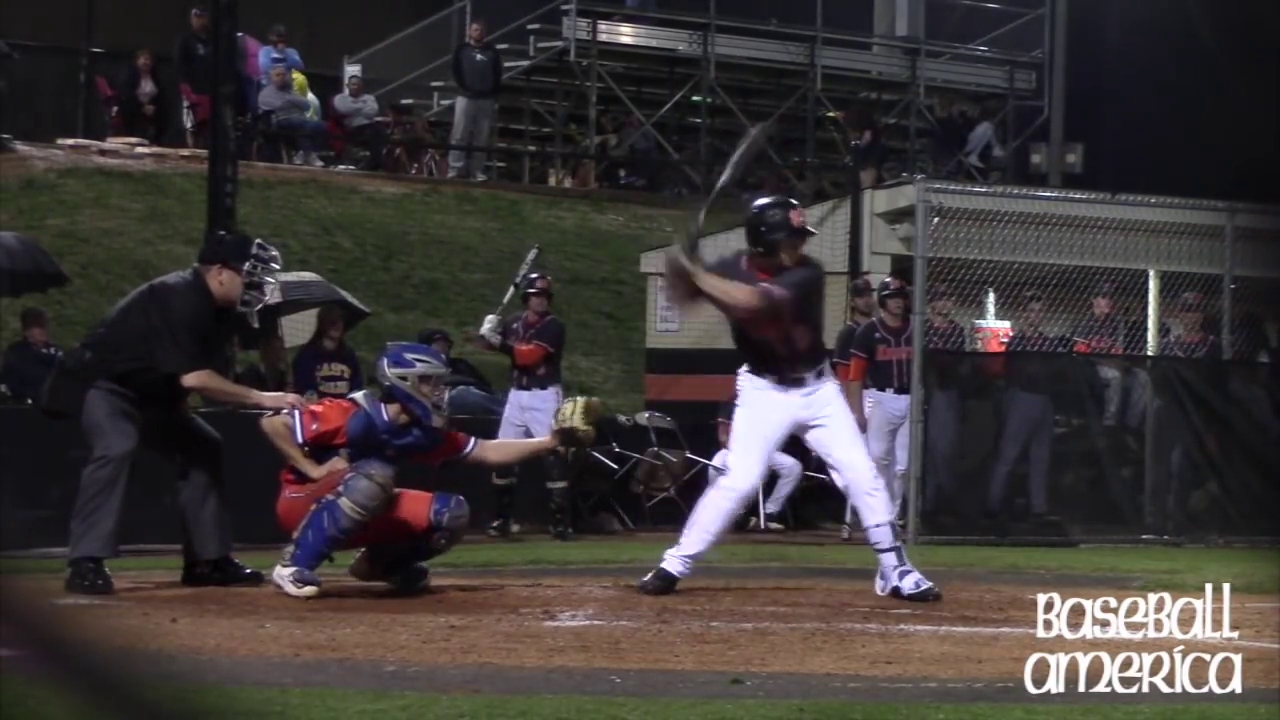 Beck has started to do a lot of work with his lower body and arms without committing his barrel. This allows him to stop his swing pretty late if he is fooled on a pitch. I saw him stay under control on some late takes and looked very good. This sequence is also very nice for generating power. If Beck decides to swing he just puts the bat on the already spinning merry-go-round and away it goes. (If you recall, I didn’t see this sequencing in Pavin Smith.)

Now for the bad news. Perhaps the biggest thing I look for in a hitter is the ability to hit the low pitch. That’s where pitchers live. The strike zone is the lowest it has ever been. Being able to drive the low pitches is a must in today’s game. That is a big part of the reason I am big on The Rooker, lukewarm on Haseley, and kinda down on Smith. How was Beck in the video I saw of him? I’ll let you form your opinion on a couple swings.

So this is limited to what I have available and Beck simply may just be doing so much damage on wayward high pitches from prep pitchers, but the results aren’t good. See how in the game swings the sequence totally changes from his smooth BP swings. Instead of the confident, powerful swings we get a "Oh sh*t!" looking hack that looks like he is just trying to make contact. See if you can notice how his extension is really lacking on the low pitches.

Even in his BP swings you can really see how for a little bit lower pitch (still a strike 10 out of 10 times) the swing plane really changes and it looks like hell.

So what is the verdict on Beck? As long as he never sees a pitch below thigh-high he could be a Hall-of-Famer. Will he learn to take better passes at the low pitch? I would guess that is more than likely. I don’t think it would hurt him one bit to lower his hands in the load and that would help his path on low pitches. (This adjustment really helped Jake Lamb for example.) Beck has great actions in his swing and like I said, is probably just feasting on the low-hanging fruit of high school pitching. We could wager to guess he simply isn't looking to do damage on those pitches. But that will have to change very quickly because he won't get them belt high center cut nearly as often in pro ball. I certainly don’t feel as good about his swing as I do The Rooker, because the latter has demonstrated over and over again punishing the low ball. I like Beck’s pass better than Smith, and probably better than Haseley.

If the A’s go with Beck at #6 I won’t be too upset. I like the potential and the reports about his speed and outfield play. But if two years in Beck can’t hit the low pitch and Rooker is becoming Mike Trout 2.0, well … that will suck.