The A's should take Brent Rooker at Six

Alright, this post is to convince you and the Oakland A’s front office that the A’s should take Brent Rooker with the 6th pick of the 2017 MLB Draft. I’m going to make a case based on all the merits of Rooker, then address the concerns. I think you will see by the end of this Rooker is the only choice that makes sense.

Rooker was the best college hitter in 2017, and it wasn’t really close.

Rooker led D1 baseball with an OPS of 1.371. Yes, 1.371. Rooker also his 21 home runs (good for 5th in the nation) and stole 18 bases. If you have any concerns about those numbers being piled up against questionable opposition during mid-week games then check this out. Rooker hit .333/.429/.639 on Friday nights against the SEC’s aces. That line alone is better than Pavin Smith (rumored to be in the mix for the A’s at 6 and largely considered the best college hitter in the draft) hit this season on all days. Rooker was the SEC’s Triple Crown award winner, leading the league in average, slugging and home runs. The last person to do that was Rafael Palmeiro who managed to scratch out a decent career in the bigs.

Want plate discipline? Rooker made it a point to be more selective this year and had 41 walks to go along with 48 strikeouts. Want run production? Rooker had 76 RBI in 60 games. However you want to look at it, Rooker was the best college hitter in 2017.

The dude has good genes, and he can sell jeans

Depending on where you look, Rooker stands 6’3 or 6’4 and weighs somewhere north of 210 lbs. That would make him one of the bigger players available for the draft. I know part of Moneyball is to draft "baseball players" but that hasn’t exactly worked out. When you take a so-so athlete with one plus tool (like hit for Grant Green, Billy McKinney, or whatever tool Michael Choice or Jemile Weeks had) and that tool doesn’t pan out then you have nothing. Meanwhile this game is being played by bigger, stronger, faster dudes then ever. Rooker is one of the athletes.

It isn’t just size. They guy can move. He stole 18 bags last year. He can play outfield and first base. If he isn’t great at either it will come, he is that kind of athlete. I reached out to some of the guys who have worked him for comment. One of them is Dustin Lind, a physical therapist out of Montana. Here is what he had to say about Rooker "Brent can readily solve complex motor problems, which allows him to make mechanical adjustments better than most athletes. He's an active learner, and understands how to use his individual physical traits and exploit them as a hitter. His ability to gather information about his movement abilities and formulate a plan to optimize his swing puts himself in a position to succeed as a result." Allow me to translate - he moves well.

Rooker is a student of his craft. Check out this quote from former Mississippi State Hitting Coach Nick Mingione "He’s in love with hitting. He loves the act of it, he love talking it, he loves studying it, he loves watching video of it. The guy is in love with hitting." Rooker studies video of himself and other hitters (namely Donaldson and Barry Bonds) to see what he can pick up. Rooker traveled to Texas in the offseason to work with some of the best hitting coaches around (more on that in a minute). He follows me on Twitter for goodness sakes. Rooker is dedicated to becoming a special hitter.

I reached out to some of the guys Rooker has spent time with to try to get a feel for how Rooker works on his game. Check out what Ryan Parker - a hitter instructor out of Texas- had to say about Rooker:

Rooker made himself great by actively seeking out information. This seems minor but so many hitters wait to be told how they can improve. Rooker wanted to know the areas in which his swing wasn't as good as the best and how he could change to reach that level. Once he got information he was able to integrate new patterns into his swing in a very short time frame.

He didn't have to do all this extra work but he wanted to. If he repeated his 2016 season he'd still have been drafted. He flew to Texas in December to work with a bunch of hitting coaches he'd never met and he got after it. Every crazy drill and concept he dove in headfirst trying to seek improvement. He studies the game (and his own game) like the last guy on the bench fighting to hold a roster spot while having the physical build and tools of Captain America.

Rooker was in the cage with a big league hitter (former top 10 pick) and went swing for swing with this hitter. It was damn impressive. Come to find out… while he was keeping up with a big leaguer Rooker was using a bat that was 34 inches and 36 ounces. That's some kind of special. Off the charts make up. Embraces the challenges inherent to the game of baseball and even if they get the best of him he learns and adapts.

Rooker is really just getting started

Take a look at Rooker’s college stats and you will see his OPS has grown by 250 points each year. Rooker made changes in his swing this last offseason to really set him apart, and we are seeing what can happen when that goes right with Yonder Alonso. Rooker took a challenge of a coach to become more selective hitter and reduced his K/BB ratio from 3 to 1.17. Rooker hit the weights in the last offseason and added size and strength. His last year add MSU is much more indicative of his what his future holds. It would be nice to get someone in the system that actually has some upside.

A perfect example of Rooker being on the way up is his stolen bases. His first year he didn’t even attempt to swipe a bag. His second year he tried 3 times. In 2017 he stole 18. He is just starting to break out and Oakland has a chance to get in early before the stock takes off.

Remember how I said Rooker spent the offseason retooling his swing? Well, it paid off. Unlike a couple other guys I have profiled so far, Rooker’s swing is really solid without any glaring issues. Let’s look at some film. (MSU likes the 3rd base shot, but I think it works out for us.)

The thing that really sticks out to me about Rooker’s swing is his ability to really stay through the ball. Inside, outside, low, high, it doesn’t matter. Rooker puts a good pass on the ball. Allow me to explain what I mean by staying through the ball. Here is Rooker on a high, inside pitch. These pitches are very, very easy to just hook them foul or punch them at the second baseman trying to go inside-out. Watch how Rooker gets the handle where it needs to be then really stays through the ball getting good extension. Special.

Now on a low pitch. Remember how I wasn’t impressed with how Adam Haseley got to low pitches. I didn’t like how he disconnected his arms from his torso to get to the pitches (wasn't crazy about Pavin Smith either). He doesn’t stay on the ball very well and didn’t have a great angle with his rear forearm angle. How about Rooker.

Nope, he friggin stays on the pitches like a champ. Literally, like a batting champion. Rooker’s ability to go down to get pitches then stay through them is really special. Going through his film is just swing after swing of balls DRIVEN on pitches down and away. That guys, is seriously special. You don’t see it a lot. The first time someone showed me film on Rooker I said it reminded me of Buster Posey. The stride tempo, the swing initiation, connection, and staying through the ball absolutely remind me of Posey. He has that kind of swing. 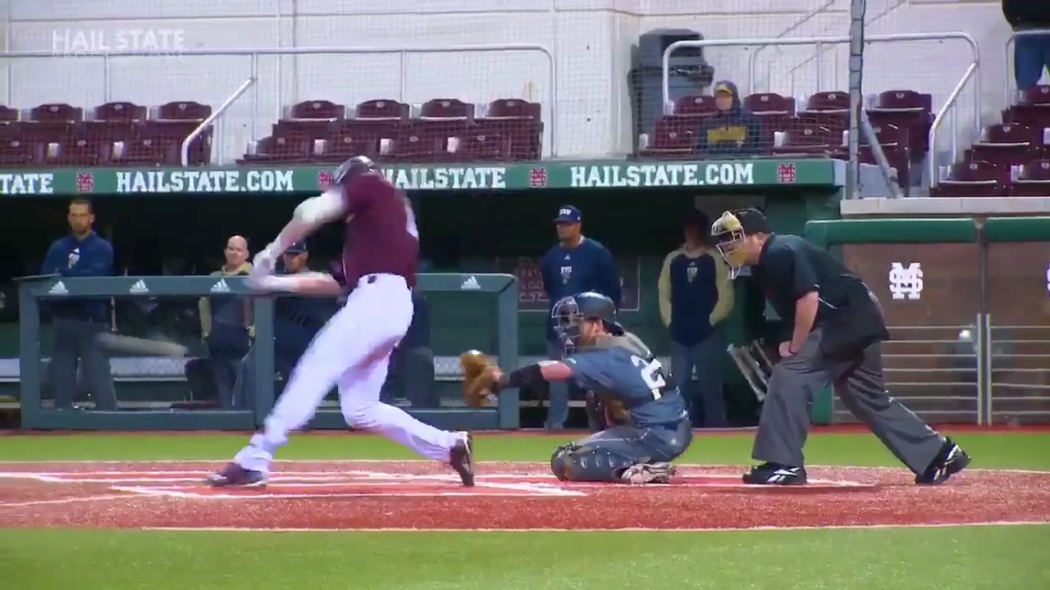 Alright, I’ve gone through the merits of Rooker being selected at six. Like all prospects, there are concerns. Allow me to address them to ease any fears. These should simply be viewed as good fortunate for Oakland. If these minor things weren’t here he wouldn’t be available at six.

Yes, Rooker is a late bloomer. He red-shirted his freshman year at MSU and is entering the draft at age 22. Rooker went to a small private school for high school and didn’t see a lot of competition. Rooker also didn’t concentrate on baseball unlike nearly every baseball prospect these days, leading his high school to the state title game in football. Rooker came to MSU as raw prospect and it only starting to define his game. Fortunately, Rooker had great coaching at MSU (not a given at D1 programs) and allowed him to slowly become a force of nature.

As I mentioned, this last offseason was crucial in his development both in terms of skill level as well as physical abilities. His production has grown geometrically has he as matured both physically and mentally in his time at MSU. Oakland has a chance to get a guy with plenty of upside left.

I don’t see the problem here. If Oakland would consider Pavin Smith at six who only plays first base, I don’t see how we can knock Rooker because he hasn’t tied down a defensive home. He played first base because that is what MSU needed. Rooker has athleticism to spare to hold down an outfield spot. We aren’t talking about Grant Green here, give him a glove and tell him to go get the ball. He will.

Alright, there you go. Brent Rooker is a dude. Oakland, take Rooker with the 6th pick of the 2017 MLB Draft. You’re welcome.

Special thanks to Dustin Lind, Ryan Parker and Connor Dawson for info for this article. If you are seeking hitting info, search out those guys. 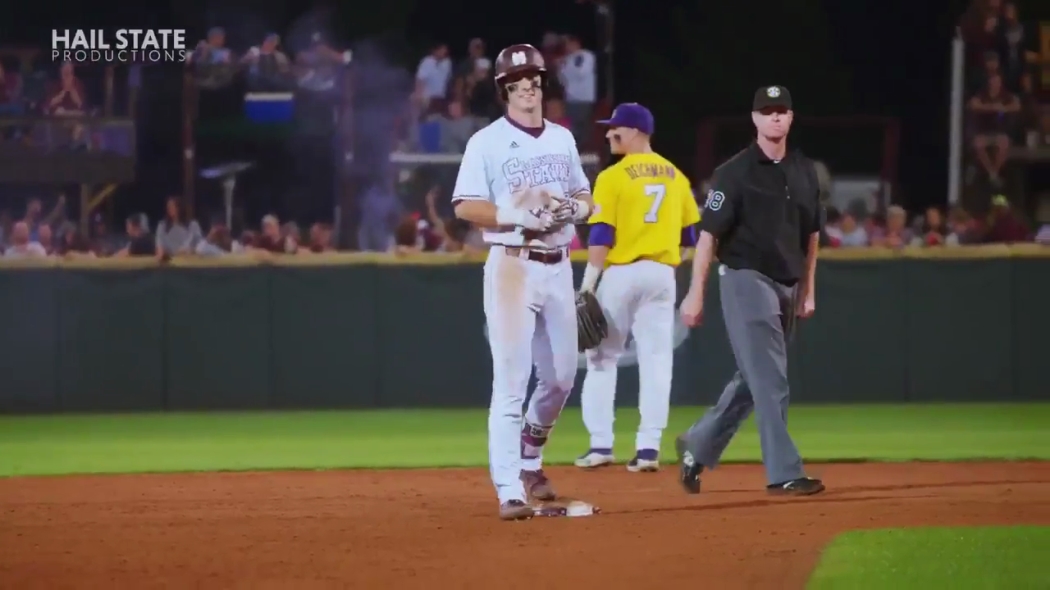