On FanGraph's Effectively Wild Podcast, Jeff Sullivan and Ben Lindbergh have often discussed their hypothetical inabilities if given the opportunity to play professional baseball. Usually these hypotheticals revolve around being a hitter while facing elite professional pitching and just how inept they would appear facing them. Like most of the population, we would all have little-to-no ability to recognize pitches against even an average pitching staff, let alone the fact that we would simply bail out of the box when faced with a 99mph fastball from Dellin Bettances or Aroldis Chapman.

Even the most proficient of us would likely have little success against a Jed Weaver fastball rated in the upper-70s.

Whether we want to admit it or not, being a home plate umpire is probably a similarly difficult task. If dropped behind Josh Phegly in yesterday's game, we would have little success correctly calling 225 pitches flying at 95-plus miles per hour while others break 6 inches or more from one side of the plate to the other.

Despite the degree of difficulty of either task, however, we expect a certain level of competency from paid professionals. We demand that hitters succeed in getting on base at a clip of at least 33% and we demand that umpires keep a consistent strike zone for both teams, home or away. For umpires, we [usually] gladly extend mulligans for incorrect calls as long as there is a sort of contrition; make the same incorrect call the same way for both teams for the remainder of the contest and [usually] all is forgiven.

Will Little's only consistency was in his adherence to one strike zone that favored the home team and another that proved costly for the away team.

For those that don't remember, Will Little first made headlines in his young career during the WBC when he ejected Dominican Republic Manager Tony Peña Sr. for arguing a pitch that despite fantastic framing, appeared quite low and was still called a strike. Just as egregious, the final out of the game was courtesy of a called-strike three in what was essentially the same location across the letters that he used to ring up Trevor Plouffe.

Yesterday afternoon at Yankee Stadium, Little gave us what we might all believe is the worst called game in A's history, as far as balls and strikes are concerned. At best, Little was all over the place with no consistency in the strike zone. At worst, though, Will Little called a lopsided game that favored only the home team--which would provide some insight into his 2017 résumé: of the 8 games he has called behind the plate this season, the home team has won 7 times. For context, of 79 home plate umpires in Major League Baseball, he's tied for 5th in home winning percentage.

Below is a graph that shows the placement of called pitches only. Since the A's primarily used right-handed hitters versus the left-handed Sabathia, let's start with his calls vs. RHH. Square boxes indicate New York pitchers to Oakland hitters. Green is a ball. Red is a strike. 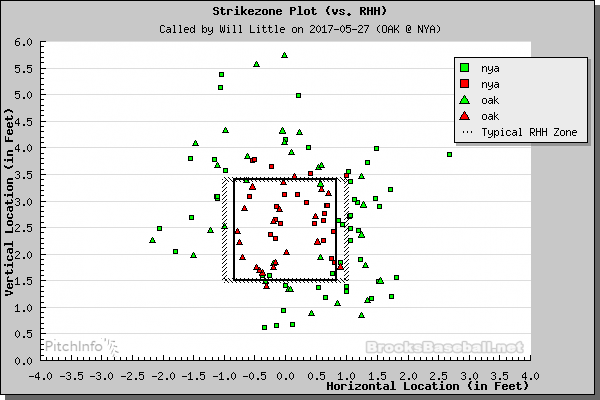 Versus LHH, there is only one incorrect call, which of course, was just as egregious as the three we discussed previously, and that favored New York. Overall, 10 of 14 distinctly incorrect calls favored the home team. 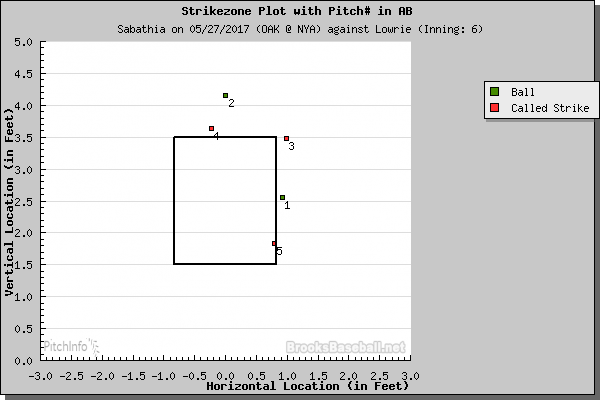 Above is Jed Lowrie's at-bat in the 6th inning where very clearly the third and fourth pitches are out of the strike zone. 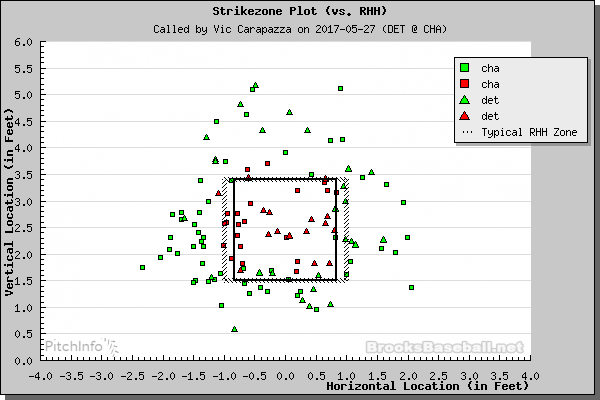 In order to assume a level of context for how one-sided calls tend to be or don't tend to be, I went through other games from 5/27/17. Instead of showing nearly flawless work, I am posting an image of what I view as the second-worst called game of the day between the Tigers and the White Sox. Home Plate Umpire Vic Carrapaza makes a total of 3 distinctly incorrect called-strikes that are actually balls in addition to 7 distinctly incorrect strikes are called balls. Of those, however, 5 favor the home-team and 5 favor the away team. Although Carapazza is not in the least bit without error, he at least called what we would deem to be a fair game. 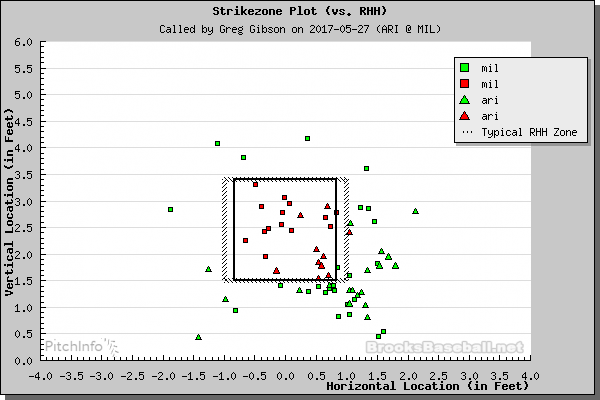 Above is something you see somewhat typically, which is a series of borderline pitches that are occasionally called strikes and occasionally called balls, often dependent on the situation, i.e. how far the catcher's glove moved from one end of the zone to the other, or how much movement the pitch itself had.

As a fan, when my team doesn't receive what would be a pivotal call on a key pitch in an important situation, it's disappointing. But it's understandable. We can rationalize borderline calls provided that they go both ways during the course of a game.

Nothing about Will Little's work yesterday was understandable or able to be rationalized.

The bottom line is that calling balls and strikes isn't easy. It's a [mostly] thankless, [probably] under-compensated position where you're rarely praised and largely derided. I think most of us still appreciate that there is a thoughtful, rational human element that does occasionally reward pitchers or hitters on borderline pitches; what we can't handle is when we are witness to an umpire who is making a call for one team and not another and as that team makes those injustices known, those injustices increase to a greater degree.

Will Little didn't just choose whether or not a pitch was called a ball or a strike; he chose which team received the victory and which didn't and baseball can't have that and still maintain the human element.