If you're brave enough to enter the dungeon, read on. Yes, the A's should trade Khris Davis, and I'm not sure I see a great argument against it. For starters, he's basically making his market rate next year, assuming his arbitration figure settles in around $10M. Mark Trumbo, an identical player, got 3/37. He's a one-trick pony with the kind of gaudy power numbers that the arbitration system overvalues.

So if we don't trade him this offseason, we're on the hook for $15M or so in his last arbitration year in 2019, and I'm not sure any of us want to give him that kind of money. In fact, I'm not sure any team would agree to pay him $15M in 2019, so he may end up being untradeable 12 months from now. Now is really our only shot to collect any long-term value from him, and I think we have a built-in replacement for him.

Chad Pinder seemed to play his way into being an everyday major leaguer, and even if he's not gonna be great against RHP, Boog Powell also showed enough to be an option at the major league level. Chad Pinder in RF with Boog Powell occasionally spelling him is a solid fit.

Matt Joyce, who was worth 2.4 fWAR to Khris's 2.3 in over 100 fewer plate appearances, was one of the better hitters on the team after a rough April. His 127 wRC+ against RHP was excellent. Then you have Renato Nunez, who will be out of options and mashed LHP with a .272/.361/.573 line against them in AAA. I think he's earned a shot, and after investing so much in him over the past eight years, I imagine the organization will want to keep him. I'm not convinced he can play a passable LF, but hey neither can Khris Davis. Plus there are options (move Olson to LF against LHP, etc.) that can get his bat in the lineup.

So we have our first move to be made... trade Khris Davis to Boston for CJ Chatham and Jalen Beeks, or (yikes) San Francisco for Heliot Ramos, or Colorado for Peter Lambert. Yes I selected the three teams with the biggest need for a power hitter, and yes that includes the Giants. I don't actually expect the Giants and A's to make their first trade since 1999, but stranger things have happened. Plus their farm system is ugly beyond Ramos, who may be way too much upside for SF to give up for 2 years of Davis. Still, I think he'd be a perfect fit for that lineup. Khrush would hit 60 in Fenway and the Red Sox were dead last in the AL in home runs in 2017, 18 full homers behind the next worst team. They'll have a clear opening at DH or 1B (with Hanley Ramirez taking one of the spots as well), and they have the deep pockets to pay him.

So now that I've turned everyone's faces the color of Khris's new Sox, I will move on to the biggest project, the pitching staff.

The first and most obvious move to be made is to trade for Brandon McCarthy in the last year of his contract. His $11.5M salary is probably more than he's worth, so we're not talking about giving up any talent here. Perhaps the Dodgers could kick in some money to facilitate the trade. As a veteran starter who was effective when healthy in 2017 on a short-term contract, the move should happen about 5 minutes after the last out of the World Series. A quick note on McCarthy's health: this year was largely derailed by a blister issue, which doesn't sound like a persistent issue to me. And the Dodgers use the DL like a bus station. I'm not convinced his injury label is all that well-earned. Since 2011, his injury history is fairly average by "Major League starting pitcher" standards when you look past the line-drive-off-the-head and the Tommy John Surgery (which is pretty much unavoidable these days). Even if he is an injury risk, it's just one year.

In the same package, I would like Kyle Farmer to replace Josh Phegley as the RHH piece of the catcher platoon. He's on their playoff roster but he's ticketed for more time at AAA behind the Yasmani Grandal and Austin Barnes in LA. Farmer will be 27 next season and I think it'd be nice for the Dodgers to send him somewhere he'll have an opportunity (I like to think that sort of thing comes into play in situations like these). Plus it'd free up a 40-man spot for them, so perhaps you can get Brandon McCarthy and Kyle Farmer for minor leaguer Will Toffey.

Next is an idea that is somewhat popular around here. Sign CC Sabathia for 1 year, $12M. I don't know what his contract will look like, but I know it won't be more than two years. I'm also kind of wishcasting and assuming he'd be interested in playing in the Bay Area after growing up in Vallejo. I also think that Sabathia is the ideal outcome for both Sean Manaea and AJ Puk, as a large lefty starter with a wipeout slider. For a team that's struggling to develop their young pitchers, adding a knowledgeable veteran like Sabathia (and McCarthy) could serve valuable in more ways than one.

Ok now it's time to fix the bullpen. If there's one thing we like doing, it's throwing money at relief pitchers. The free agent market is not short on relief pitching. Addison Reed, Steve Cishek, Pat Neshek, Brandon Morrow, and Brandon Kintzler all seem like good candidates. Reed is the only one I can see getting a 3-year deal. Morrow might be my preference, though Cishek and Kintzler both had high groundball percentages in 2017, which is appealing with Matt Chapman gobbling up grounders. So let's call it Brandon Morrow for 2/13 and Brandon Kintzler for 2/14. Good enough.

So now I've added $36M or so on 1 or 2 year contracts, and shed $10M from Khris Davis. So, assuming we can pack on $40M this winter after arbitration raises, net, we have an extra $14M give or take. Now let's do something wild. Trade Frankie Montas and Richie Martin to Baltimore for Zach Britton. The Orioles pretty much have to trade one of Zach Britton or Brad Brach, given their salaries and the fact that each is in their last year of team control. I'm thinking that by absorbing his $15M arbitration estimate, you'd limit the amount of talent to give up. I hate to give up Montas and all his potential, but he's out of options and the Orioles need controllable pitching. I'd imagine Baltimore is the best spot for him to pitch in the rotation all year. The trade feels light to me, too, by the way. But Britton was injured for part of 2017 and not nearly as effective as he was in 2016. There's real risk and the financial burden is heavy. Wade Davis, who was better and cheaper entering this year, was acquired for Jorge Soler, so perhaps the market rate isn't as high as we'd think. Plus, if there's one thing we've seen at the deadline the past few years, it's that relievers hold their trade value in July. So if, perish the thought, the A's stink next year, Britton could still be worth a decent return. 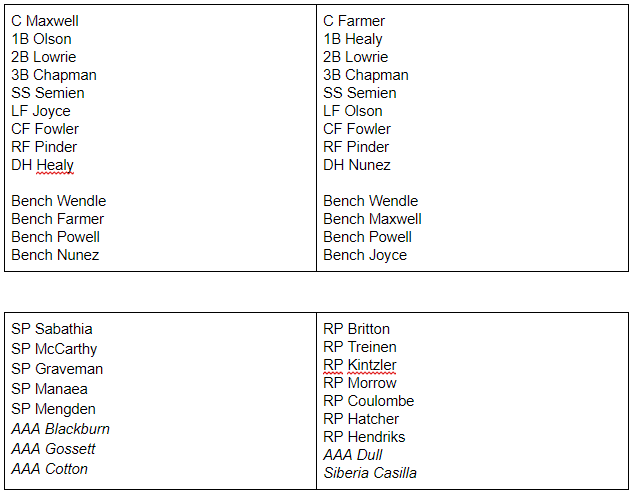 That team costs about $88M. Perhaps you'd have to ask LA to eat some more McCarthy money. Nonetheless, that is my team.

BONUS SECTION: let's leave the black lodge and go to the white lodge for a brief look at an alternate reality.

If Sabathia tells us no, try to sign Jonathan Lucroy for 3/30 (the Butler contract!). Lucroy still has 5-WAR upside and to be honest I'll bet on a catcher to bounce back over any other position. Look at Kurt Suzuki! His career has looked toast like four different times. This would replace Farmer.

If Britton is unavailable, I could be talked into absorbing the contract of A's fan favorite Kelvin Herrera. He's also in the last year of team control and on a team looking to shed salary. Like Britton, he was also less effective in 2017 than in years past. So he's an interesting upside play who also wouldn't cost much talent, if any.