They say opposites attract. Perhaps this is why I am so drawn to the 2015 Milwaukee Brewers.

The A's and the Brewers had very similar seasons in 2014. Both teams were red hot out of the gate, and ended the first half as two of the top teams in all of baseball. Both teams also suffered dreadful collapses down the stretch, with the A's settling for the second Wild Card spot and the Brewers missing the postseason all together. In the end, the Brewers finished 82-80, six games worse than the 88-74 Athletics.

Both teams were left at a crossroads - tweak the current team, hoping it can bounce back and perform the way it did in the first half, or tear it all down and try something new. The Brewers went for the former option - they turned a year of Yovani Gallardo into prospects, sent Marco Estrada to Toronto for Adam Lind, and re-signed (for like the tenth time) closer Francisco "K-Rod" Rodriguez. Most of the Brewers' strong core (catcher Jonathan Lucroy, outfielder Ryan Braun, and centerfielder Carlos Gomez) is still intact. On the contrary, we all know what the A's did - turning core players like Josh Donaldson, Derek Norris, Brandon Moss, and Jeff Samardzija into a new core comprised of players like Ben Zobrist, Brett Lawrie, Billy Butler, and Jesse Hahn.

So these two teams, after similarly disappointing 2014 seasons, went in opposite directions this offseason. It will surely be interesting to see whose strategy worked out.

The first few innnings of this afternoon's Spring Training game will be a battle of Opening Day starters. Young ace Sonny Gray will take the hill for Oakland, hoping to rebound after a shaky start against the Arizona Diamondbacks on Tuesday. Opposing him will be veteran Kyle Lohse, owner of a 3.28 ERA over the past four years. Lohse has impressed in 5 2/3 innings this spring, to the tune of a 1.59 ERA (7 K's, 0 BB's). This should be a fun pitching matchup. 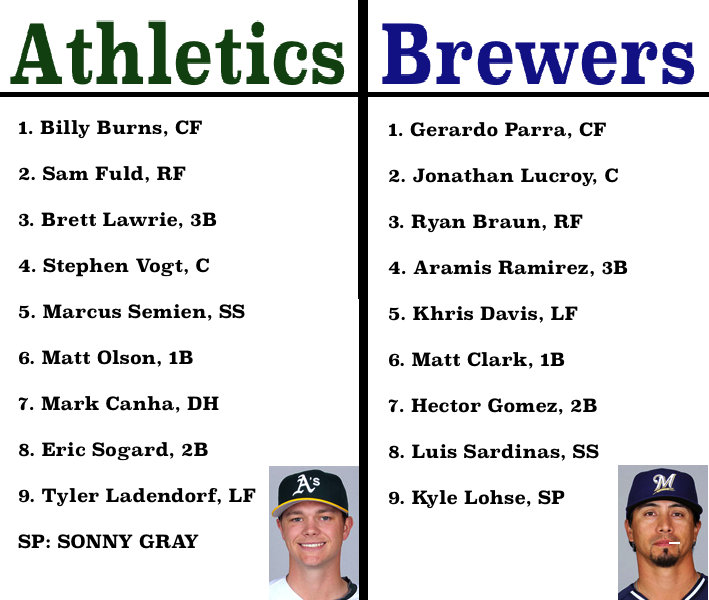