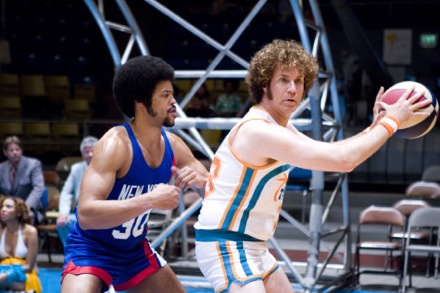 Will Ferrell as Jackie Moon

As my two lap dogs, Ruby and Meadow, fold themselves into their overly stuffed pillows looking as if they don't have a single care in the world (which they don't!), I bring you greetings from a slightly sun-parched livingroom floor somewhere in the concrete jungle of the East Bay. Today, Saturday Night Live alum and chronic funnyman Will Ferrell dons his best Campy Campaneris impersonation at a spring training facility near you fortunate ones basking in the desert sun. Ferrell, a self-professed sports addict, is in Arizona today where he will play all nine positions over five different spring games, ala Campy's amazing feet on September 8th, 1965. As part of a Kansas City A's publicity stunt dreamed up by owner Charles O. Finley because of poor attendance, Campy played all 9 positions in that game and was forever etched into the lore of Athletics baseball. "Campy Campaneris Night" drew over 21,000 fans. The following night's attendance returned to a more unrobust 1200 fans.

Ferrell is participating in the filming of an HBO project aimed at the fight against cancer. He is slated to play shortstop for the A's for an inning during today's game. My jealousy hat comes off to those of you who get to see this firsthand. Bill Murray, also of SNL fame, was famous for his Pebble Beach Pro-AM antics for many years. In many ways, Ferrell has assumed the "comedy at the expense of athletes" torch. I for one love it. Baseball is indeed a game, and laughing is indeed a precious commodity, especially to those suffering from an illness as brutal and unforgiving as cancer. Way to go Will! You are indeed a gracious, and very, very funny man......