With the A's and White Sox squaring off for four games, I asked Jim Margalus and Steve Peters of South Side Sox a few questions about their favorite team. Here's what they had to say!

Share All sharing options for: White Sox Series Preview: Q&A with Jim Margalus and Steve Peters of South Side Sox

The Oakland Athletics lost on the road, so they tried playing at home instead. Then they lost at home, so ... I guess they'll try the road again. I'm about as optimistic as it comes, so when I'm starting to get frustrated you know things are getting serious. Fortunately, "frustrated" isn't the same as "lost hope" and the A's now have four game against the rebuilding Chicago White Sox with which to right the ship. Even better, one of Chicago's best hitters (Adam Dunn) is now on the Athletics.

Sonny has been cloudy lately. Lester and Danks will face off in a battle of left-handed Jo(h)ns. More on Bassitt and Noesi in the Q&A. The final test comes on Thursday, when the A's face Chris Sale, who is likely one of the five best pitchers in baseball. The good news is that the A's beat Sale twice last year. The bad news is that both times it was Jarrod Parker who out-dueled him. But the other good news is that every single Oakland RBI in those two games was recorded by Josh Donaldson, who is still on the team and is still good at hitting! The A's have not faced Sale yes this year, which is totally fine with me. Also, according to Baseball Reference, Sale's nickname is "Condor," which I've never heard before. It makes sense, though, since his wingspan is approximately 25 feet.

This series sneaked up on me a bit so I didn't give Jim much time to write up his answers, but on short notice he was able to give us a quick look at the issues I asked about. BUT WAIT, there's more! I also heard back from Steve Peters, who also writes for South Side Sox, so I'm including both sets of answers to give us a more varied look at things.

1. Athletics fans are already enamored with their new slugger, Adam Dunn. What did White Sox fans think of the Big Donkey during his up-and-down tenure in Chicago? What should A's fans know about him (good or bad) that they may not have already figured out from his homers and strikeouts?

Hawk Harrelson summed up in one game

Hawk Harrelson summed up in one game

JM: His White Sox career was basically over as soon as it began. He had an appendectomy in the first week of his first season and came back too soon. That screwed up his swing, he ended up having one of the worst seasons in history, and his rebound never made up for it. Likeable guy, but the WAR figures say it all.

SP: Dunn frustrated most fans with his first season. His fWAR was negative-3.0 that season. He's been roughly OK since, but he was never what anyone hoped for with the four-year deal. The average fan is probably much more negative.

2. In addition to Dunn, the White Sox also traded infielder Gordon Beckham and outfielder Alejandro De Aza. What did Chicago get in return in these deals, and do you think GM Rick Hahn did a good job of cashing in on his veterans? Is there anyone else you wish had been traded, or think will be dealt during the offseason?

JM: The best thing the White Sox got in return was playing time for prospects. None of the players dealt were in the team's future, and in the case of Beckham the Sox had a choice of three potential replacements. Carlos Sanchez is getting the first crack at it.

SP: The Angels claimed Beckham on waivers and the Sox said OK, so they got nothing in return. De Aza was traded for two organizational arms. Beckham was a non-tender candidate this offseason so the Sox saved a little money and got to see a couple extra weeks of Carlos Sanchez. De Aza had some value as a platoon or fourth outfielder. He might have stuck around during the offseason if another option wasn't found.

Dayan Viciedo is likely gone after the offseason. There was talk he'd be traded to the Mariners. I think a deal similar to Beckham's was the most any of us hoped for. Unfortunately, we're being tortured by getting to see him almost every day lately. Wait ... not tortured ... hey, do you want a new Cuban left fielder? It sounds like the A's need one.

John Danks was rumored in trades to the Yankees. With two years and over $20 million left, that was going to make the Sox very happy.

Jonah Keri has a nice article on Grantland today that talks about what the 2015 Sox could look like. It probably sounds like what a lot of us would say.

3. Jose Abreu (4.9 bWAR) and outfielder Adam Eaton (4.8 bWAR) have enjoyed breakout seasons in Chicago this year. What other position players have impressed you during what has been a rebuilding year? Which members of the current lineup do you think could be on the next good White Sox team?

JM: Avisail Garcia was supposed to be right alongside Abreu and Eaton as part of the new core, but he crushed his shoulder in April and ended up missing four months with labrum surgery. He was supposed to miss the whole season, though, so the fact that he's getting reps in September is a major positive, even if he's not producing much right now.

Conor Gillaspie has had a surprising season at third base, although optimally he's probably a platoon/bench bat at corner spots.

SP: Of the position players last season, only Avi Garcia was guaranteed a job. The signing of Jose Abreu likely caused the Sox to keep Alexei Ramirez and Dayan Viciedo. Everyone else was expendable. Other than Abreu, Eaton, and Adrian Nieto as the backup catcher, the Sox position players were essentially the same as 2013.

While Gordon Beckham was on the DL, Marcus Semien was on the Sox for two months. He looked like a guy who had played less than a full season at Double-AA. Whether he's able to be much more than a utility player is still a question. I'm leaning towards yes, but I'm in the minority. Carlos Sanchez came up after Beckham was traded and is the slap hitter that he was advertised as. His 1.6 BB% and 23.8 K% are bad, but not unexpected for an initial callup. 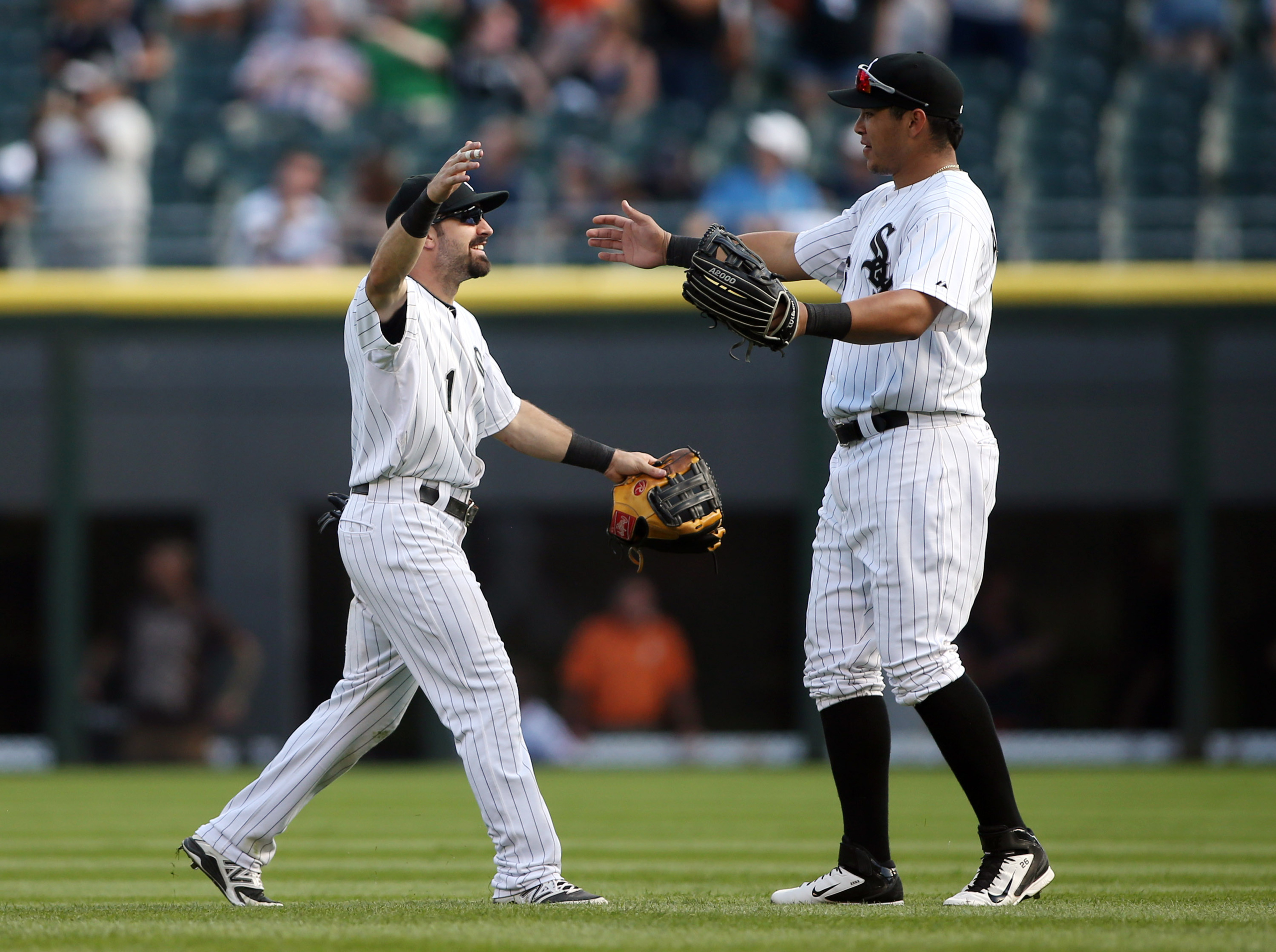 Adam Eaton and Avisail Garcia hugging it out after a victory is something the White Sox hope to see a lot of for years to come. -- Photo credit: Jerry Lai-USA TODAY Sports

4. Are there any exciting September call-ups in Chicago who A's fans might see this week?

JM: Nobody's really "exciting" to outsiders, I imagine, but Sanchez and Marcus Semien pique our interest the most. (Editor's note: Semien is a local boy who went to high school at St. Mary's in Berkeley and went to college at Cal.)

SP: Much of the excitement is at home. Carlos Rodon, Tim Anderson, Micah Johnson, Tyler Danish, and Frank Montas are the top prospects and none were called up. The guys who were called up we all know pretty well or are not top-of-the-line prospects. There's also Michael Taylor, who you probably know a lot better than we do.

5. Hector Noesi (Mon starter) has actually been decent this year. What has changed for him, and are you surprised that he's been as competent as he has been?

JM: Very surprised. He's found a way to improve his changeup while working on it at the MLB level, and he can be ridiculously efficient. The downside to throwing strikes is that he's a flyball pitcher in a small park, so he's susceptible to quick crooked numbers.

SP: What changed for Hector Noesi is he got Don Cooper as a pitching coach. We're surprised he's been OK* since his last appearance for the Rangers was against the Sox and in that game he gave up seven runs in an inning. Ten days later he's the starter for the Sox.

His problem has been early innings.

6. What's the scouting report on Chris Bassitt (Wed starter), who will be making his second career MLB start?

JM: Kind of a late bloomer, throws in the low-90s, has good stuff against righties, but doesn't (yet?) have the traditional changeup to neutralize left-handed bats. His future is likely in the bullpen.

SP: His first start didn't go well, but there were a lot of BABIP inflicted wounds.

7. Jake Petricka leads the team with 11 saves, but I've never heard of him. Is he the team's current closer, and if not then who is? What should A's fans know about him?

JM: He is, but only because everybody else has failed harder. He throws 95-98 mph with a heavy sinker, but he is also vulnerable against lefties. Zach Putnam might be called upon if the ninth is lefty-loaded. Both of these scenarios assume the White Sox will ever have an occasion to save another game.

SP: The Sox really haven't had a real closer for most of the season. I hadn't noticed he was at 11. I was kind of surprised to see someone in double-digits.

8. Can you please write us a haiku or a limerick about White Sox legend Paul Konerko, who is retiring at the end of the season?

Steady as a rock.
A remarkable career,
If a year too long.

Thank you, Jim and Steve, for participating in the Q&A!

The series starts this afternoon. First pitch is scheduled for 5:10 p.m., Gray vs. Noesi. Brandon Moss is in the lineup batting eighth. Konerko has a broken hand and will miss at least a week, so it's likely that we've already seen his last game against the Athletics. Much respect to a Chicago fan favorite for a long, successful career, that included 439 homers and a World Series ring in 2005 (and an ALCS MVP award along the way to that title).