Athletics vs. Royals 2014 Wild Card by the numbers: Batter vs. Pitcher matchups

The game is almost here. Let's take a look at the career numbers of each lineup against their opposing starters.

Share All sharing options for: Athletics vs. Royals 2014 Wild Card by the numbers: Batter vs. Pitcher matchups

The big game is almost here. Baseballgirl will be here with your Game Thread shortly, but while we wait let's take a look at the career numbers of each team's hitters against the starters they will oppose on Tuesday. Do remember that all of these inherently come in tiny samples, some of them spread out over many years, and that they should be taken with a truck full of salt. I'm not usually a big believer in these kinds of stats for that reason, but at this point we'll look at any new takes we can get.

Both of these charts are taken straight from ESPN.com: link to Shields, and link to Lester. 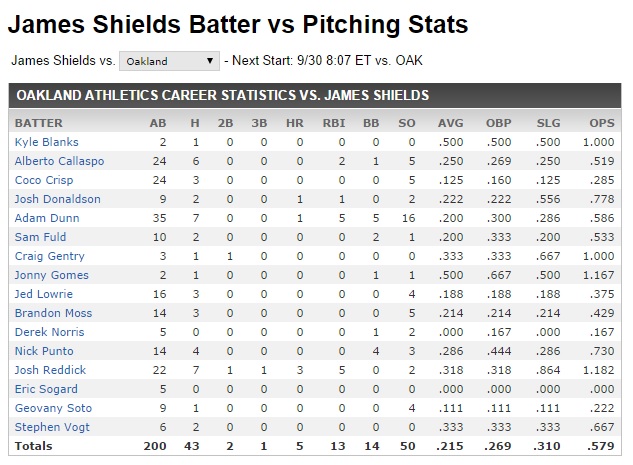 It's pretty clear to me that Josh Reddick is the key position player in this game for Oakland. He has dominated Shields during their careers (two of those homers came in the same game on Aug. 3, 2014), and Donaldson is the only other member of Tuesday's starting lineup who has ever gone deep off Big Game James. On top of that, I expect the Royals will try to take an extra base whenever possible, going first to third on singles (or second to home). Reddick's arm in right field is the only thing standing between them and success in that aggressive strategy, since Coco won't be throwing anyone out and guys don't challenge as often on left fielders (in this case, Fuld, who does have an arm as well). Adam Dunn's line is uninspiring (.200/.300/.286, 1 HR, 16 Ks in 40+ PAs), and that's got to be why he isn't in the starting lineup.

Let's break down the starting lineup into three groups:

Good against Shields in the past:

Bad against Shields in the past:

Fewer than 10 at-bats against Shields:

That's not as encouraging as I'd hoped, which is why Reddick is my pick to make the difference. Do note that Nick Punto has success against Shields, and that Jonny Gomes has reached base twice in three tries against him. But these paltry stats underscore the importance of Lester's outing. 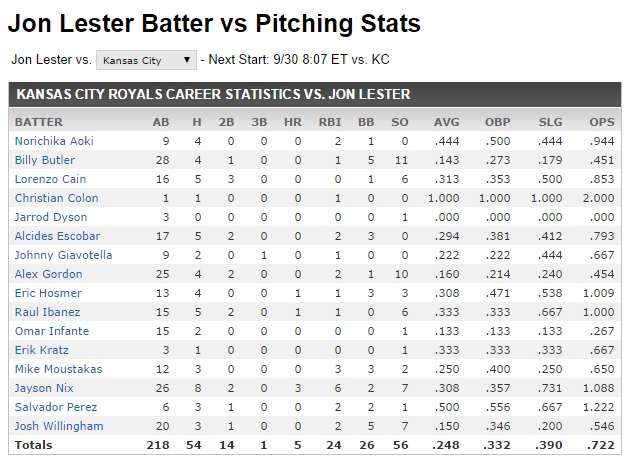 Wait, let me check something ... okay, Jayson Nix is not in the starting lineup. That's a relief. He's basically been as good against Lester as Reddick has been against Shields, though you'd be excused if you don't buy into the sustainability of Nix's line. Still, can't argue that he's owned Lester so far. Let's break down the Royals' lineup into the same three groups:

Good against Lester in the past:

Bad against Lester in the past:

Hosmer is the only one in the starting lineup who has hit a homer off of Lester. However, a few of the slashers have found success against him, so he'll need to make sure to prevent Kansas City from stringing together any long rallies. For all of the dominance that Lester has shown against the Royals over the years, there are some guys in this lineup who have succeeded against him.

I feel less good about things now that I've looked at these numbers. Good thing I added that disclaimer at the top about not believing in tiny samples. You should disregard this entire post and pretend that you didn't see it. Lester is awesome, and that's all you need to know.