The Oakland Athletics visit Globe Life Park to visit the Texas Rangers with an opportunity to punch their ticket to the AL Wild Card Game. First pitch is at 5:05 pm Pacific Time.

At Lookout Landing, Ashley Varela talked about what happened when she allowed herself to become emotionally guarded against disappointment after watching the Seahawks lose Super Bowl XL in 2006, "It was my first real heartbreak as a sports fan -- and, with tears streaking my face, I decided it would be the last." But when it came time to celebrate her San Francisco Giants in 2012, she found that guardedness muted her appreciation for the moment:

It was the perfect ending to an emotionally-fraught postseason - yet, as the Giants doused each other with champagne and the lone Tigers fan crept out of the bar, I felt nothing close to happiness. I had been so determined to safeguard myself against disappointment that I'd lost the ability to revel in my team's success.

With the disappointments we have experienced over the last two months with our Oakland Athletics, I am afraid we have become so afraid of the final failure that we too will lose the ability to revel in our team's success. Tonight, the Athletics have a chance to do what 20 other teams cannot after six months and 2,430 games: play one more day.

Be open to that pain because missing the postseason is a terrible thing.

Be open to that pain because on Friday we saw what it means when a team that has experienced that hurt for a generation, the Kansas City Royals, to play at least one more day.

Be open to that pain because you are hungry to win Tuesday, to beat the Angels after that, to win the American League pennant after that, and to finally lift the Commissioner's Trophy.

Jeff Samardzija take the mound for the Athletics tonight against Derek Holland for the Texas Rangers. The right-handed Samardzija enters tonight's contest 7-12 with a 2.88 ERA in 32 starts between the A's and Chicago Cubs, and has not conceded an earned run in his last three starts. In his last start, against the Los Angeles Angels, he went seven innings and conceded just five hits and one unearned run on the way to an A's 8-4 victory.

On September 17 against the Texas Rangers, Samardzija exited after eight innings of ten strikeout shutout ball with a 1-0 lead, only to see Sean Doolittle and a number of other relievers concede six runs in the top of the ninth to toss away the dominant performance that provided the then-anemic offense with the smallest reed to win.

The Texas left-hander Derek Holland is a very late scratch due to a migraine, which is probably a huge break for the Athletics, he was set to make his sixth MLB start since returning from microfracture surgery to treat an injury he sustained while playing with his dog in pre-season. Holland is 2-0 with a 1.31 ERA in 34⅓ innings pitched. He has yet to give up more than two runs in a start, four of them seven innings long, and one "only" 6⅓ innings.

Josh Donaldson will start at third base tonight despite appearing to be in obvious pain after diving for a foul ball in Friday evening's game.

Adam Dunn returns to batting second and will DH. Norris had been slated as the DH with Soto catching when Holland was the pitcher.

Jim Adduci will be the designated hitter for Texas tonight. He is making his first appearance since sustaining a concussion on August 28 on a defensive play.

James Hoye made his MLB debut in 2003. A's fans may know him most infamously on May 19, 2012, when, as home plate umpire, he incorrectly identified a pitch thrown inside by Tyson Ross to Ryan Vogelsong inside as a hit by pitch instead of as a foul bunt.

Hoye's 3.63 umpire ERA very slightly favors pitchers compared to the Major League ERA of 3.74 this year. I leave it as an exercise for the reader to make heads-or-tails of Hoyes' strike zone from September 2 between the Pirates and Cardinals:

Today will be day 2 of A's collapse bingo. The rules are simple, pick a card and call out the spots you cover in the game thread as we go along. If the A's win, everybody loses bingo, but the A's win! If the A's lose, whoever called a valid bingo first wins, and everybody is sad! 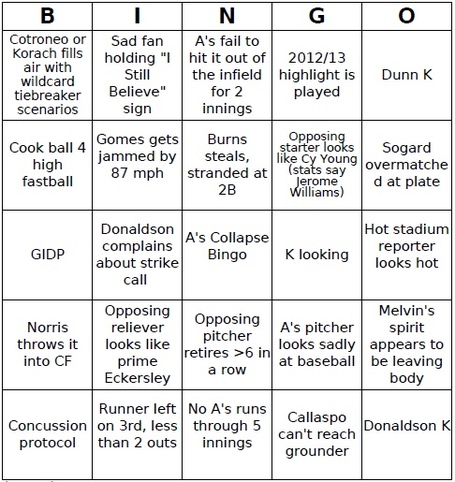 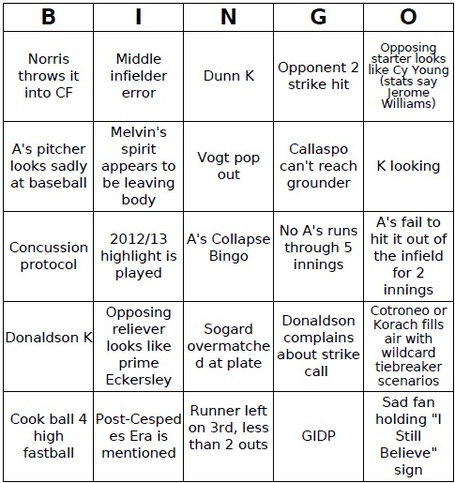 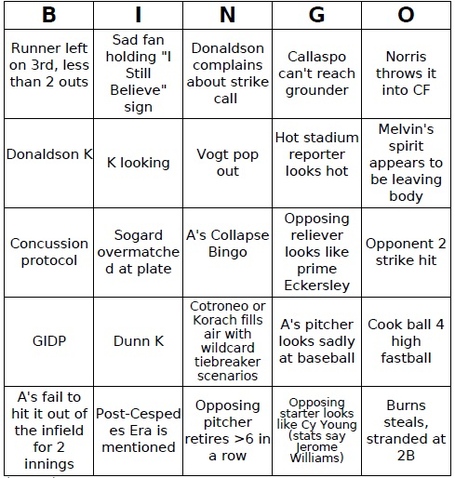 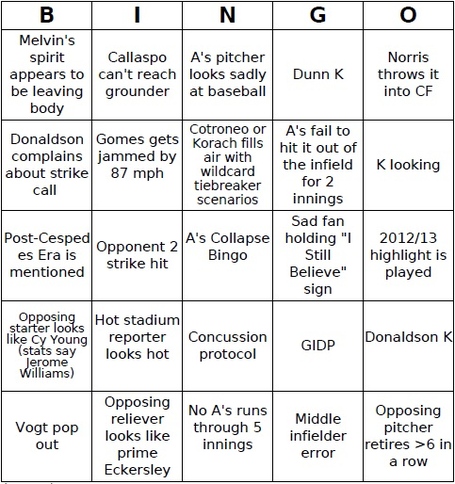 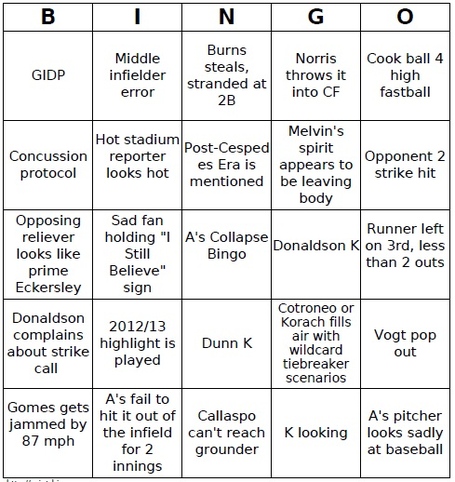 I haven't used the word penultimate yet

It's the penultimate game of the A's regularly scheduled season, coming up at 5:05 PM!