Despite the addition of Adam Dunn and Geovany Soto, the A's bats haven't picked up a lick in September. In fact, somehow, they've actually gotten quite worse, especially in the area of extra base hits. Like they basically don't hit any.

Their .309 September slugging percentage attests to that. Yes, slugging. They are hitting and walking at about the same abysmal rates as in August, yet their hits now are practically all singles. Any A's fan probably would have guessed that without looking at any numbers, but seeing that .607 OPS in sharp relief is shocking.

Just to give you an idea, out of all qualified major league batters in 2014, only 3 have an OPS below .607. Just for kicks, they are Jean Segura, Matt Dominguez, and Zack Cozart. BJ Upton has a .609 OPS. You get a gold star if you can guess the 5th from the bottom, sliding in with a whopping .611 OPS (his line is probably the closest comp to our September team). You'll get a laugh.

It's actually quite hilarious, well, at least if you can take a step back and laugh at how absurd it all is [side note, there were so many great BJ Upton post-strikeout pics to choose from in the photo tool. Impossible to pick just one].

Even though the team's September ERA has dipped to 2.98 (good for 6th in MLB), the "hitters" are also "helping out" in the field, tacking on about one unearned run every two games, in addition to their "contributions" at the plate. I guess that would explain why the A's winning percentage is down 50 points month over month. If they hit like 9 Jean Seguras in Arlington, they are toast.

Can the A's turn it around? Hahahahaha...oh wait, that was a serious question...hahahahaha hell no. But the good news is, they might only need to hit like 9 Dustin Ackleys (.245/.293/.396/.689) to give their robust pitching staff a chance to win. I never, ever thought I'd see the day where I was hoping our team could hit as well as Dustin Ackley. So yeah, a turnaround might be too much to ask for, but I'm just asking for our team to go from "worst in the league" to "terrible." From BJ Upton to Dustin Ackley. If they could rise up to be Brian McCann bad (.235/.289/.410/.700) in the postseason, this team could go a long way.

It's sad that this is what it has come down to, but I think even this group of injured and ineffective players can get "hot" enough to hit like crap. That's probably all they need to do to win some games. Seriously A's, we ain't asking for much.

Stats if you need a good cry: 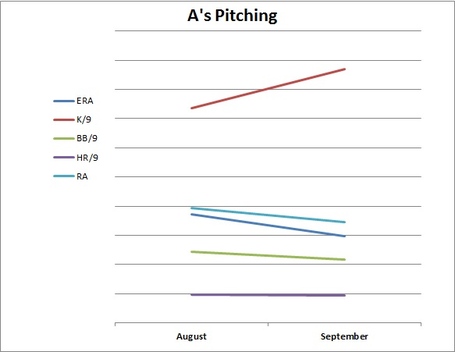 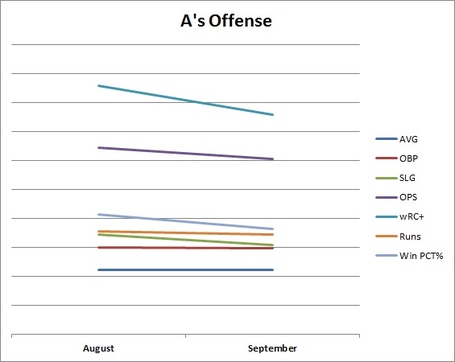