Jon Lester takes the hill for the Athletics to try to put the charge in the final 10 games. He'll face Philadelphia Phillies' rookie David Buchanan to start off the final interleague series for Oakland, beginning at 6:35, with Star Wars-themed fireworks to follow.

The former Phillies, Expos, Twins, and Angels manager Gene Mauch once said, "Losing streaks are funny. If you lose at the beginning you got off to a bad start. If you lose in the middle of the season, you're in a slump. If you lose at the end, you're choking." The Athletics, of course, are combining the slump and choke phases of Mauch's analogy, but his point is salient. The A's can come out of this at any time, and so long as they get through these remaining games, anything can happen in the postseason.

Left-handed pitcher Jon Lester makes his 10th start for the Athletics. Lester has made 17 consecutive Quality Starts dating back to June 12. Opposing him is Philadelphia rookie David Buchanan, who bring a 6-7 record and 3.75 ERA to this contest, for an ERA+ or 98. The right-hander has struck out 5.5 batters per nine innings, and allowed 2.6 walks per nine.

Literally, our only hope. pic.twitter.com/ooboJ1BxxK

For the Athletics, Josh Reddick reports himself available off the bench as a pinch-hitter, as his ankle is feeling much better. His neck bothers him enough that he declined to take batting practice this afternoon. Right-handed batting bench options are Nate Freiman, Geovany Soto, and Jonny Gomes. Switch-hitters are Alberto Callaspo, Nick Punto, Andy Parrino, and Billy Burns. Bryan Anderson is the other left-hander on the bench besides Reddick.

The A's have had the interesting experience of facing both the Clayton Kershaw of home plate umpires in Kerwin Danley (2.71 umpire ERA) and now tonight the Clay Buchholz of home plate umpires in Chris Conroy (4.99). In an era where people are asking whether we should lower the mound again or reduce the strike zone, Conroy's ERA is a full 1.24 runs above the Major League average of 3.75. Judge Conroy's strikezone from an August 5 game between the Texas Rangers and Chicago White Sox for yourself: 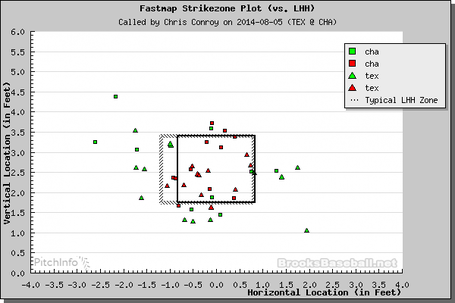 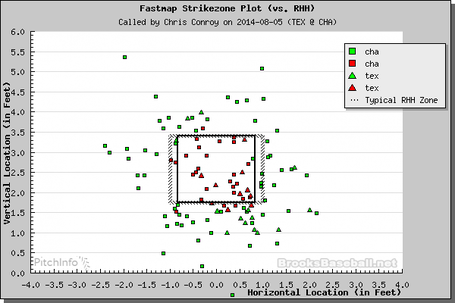