With the A's and Phillies squaring off for three games, I asked Liz Roscher a few questions about her favorite team. Here's what she had to say!

Share All sharing options for: Phillies Series Preview: Q&A with Liz Roscher of The Good Phight

Hey look, a bad team is coming to town. Maybe the Oakland Athletics can beat them. I mean, probably not, but maybe. You can at least imagine what it would look like in your head. If you ever wanted to know what it feels like to have two All-Star pitchers going in a three-game series but still feel no confidence in actually winning that series, well, now you know. Prepare for a guy you've never heard of to come up with an inexplicable game-winning hit, which in fairness is probably how other fans felt about playing the A's in the first half. I'll go with Darin Ruf, because it looks like he had financial trouble as a young adult and had to hawk some of the letters in his name to afford room and board.

Let's play mAd libs. The matchup in the first game is all A's, so I expect eight shutout innings from Lester and a 1-0 lead followed by a blown save by (insert reliever) via (insert bizarre, painful circumstance you'd never seen nor even considered possible). In the second game, in which the Phillies are literally starting the literal Jerome Williams, Pomeranz will serve up a pair of homers to (insert aging former All-Star Philly here) while Williams throws (insert number from five through nine) shutout innings in a (insert lopsided score) victory. In the final game, Kazmir will get lit up for (insert number, five or higher) runs in only three innings, but the lineup will come back against Burnett and tie the score. However, the Phillies will receive a thrilling two-run (insert batting outcome) by (insert Philly you've never heard of from this list) and Ken Giles will finish the game by striking out the final (insert number from three through six) batters of the game in relief for a one-run victory.

That's what it feels like to be inside my head right now. I'm sure you can all relate.

1. Sean Doolittle
2. routine double play ball swallowed by a possum but ruled still in play, causing fielders to attempt to induce marsupial vomiting while two runners scamper home to take the lead
3. Jimmy Rollins
4. 7
5. 6-1
6. 6
7. suicide squeeze bunt
8. Darin Ruf
9. threeve (which means I stopped paying attention after the first three but it could have been as high as five in the end)

Oh yeah, and in case you hadn't heard, closer Jonathan Papelbon is currently suspended for grabbing his Appalachian Mountain oysters in a rude gesture to his own home fans. So, it does get worse than being an A's fan.

1. Which of the following players do you EXPECT to see on the 2015 Phillies: Chase Utley, Jimmy Rollins, Ryan Howard, Cole Hamels, Cliff Lee, and Jonathan Papelbon? And, slightly different, which ones would you LIKE to see back? What if you could only pick one of them to keep?

Phillies need a new "heart of the order"

Phillies need a new "heart of the order"

LR: Next season, I EXPECT to see Utley, Rollins, Howard, Lee, and Papelbon. (I really think they're going to trade Hamels in the offseason in a deal that will make me want to become a fan of a different team.) Who I'd like to see is different. I'd like to see Utley, Rollins, Hamels, and maybe Lee. In my ideal world, the Phillies have traded Papelbon and released (or somehow traded) Howard. If I had to pick one player to keep, that's easy. It's Cole Hamels. His talent is the kind you build a team around. His talent is the type you don't trade for anything less than a team's top two (or even three) prospects. There is one player on the Phillies I don't ever want to see traded, and that's Cole Hamels.

2. Grady Sizemore has continued his comeback in Philadelphia. What have been your impressions of him, and what is his ceiling at this point in his career?

LR: Oh, Grady Sizemore. Forever tempting us with flashes of who you used to be. (Fun fact: did you know that he is Grady Sizemore III? There are two elder Sizemores named Grady, for some reason.)

In his first full month with the Phillies (July 11 to Aug. 11), he hit .311/.354/.423. Since Aug. 12, he's hit .203/.266/.407. Woof. I mean, he's a decent outfield fill-in, and in aggregate he hasn't been earth-shatteringly terrible, but I think if this year has shown me anything it's that Grady Sizemore just isn't an everyday player anymore. I want nothing more than for him to find his stroke again and become who he once was, or was promised to be. But I think that ship has sailed. I don't object to him being on the Phillies, but Ryne Sandberg is the type of manager who will (and has) fall in love with a veteran fill-in and play him constantly. (Example: Terry Collins and Eric Young Jr. of the Mets.) When Sizemore starts to take serious at-bats away from younger players, that's when I object.

3. The current Phillies squad is notorious for being loaded with aging veterans, but there are a few young-ish players on the roster -- reliever Ken Giles, shortstop Freddy Galvis, third basemen Cody Asche and Maikel Franco, outfielders Domonic Brown and Ben Revere, and starter David Buchanan, among others. Which ones are keepers? Which one is your favorite to emerge into a legitimate star?

Phillies finally show it's OK to think ahead

Phillies finally show it's OK to think ahead

LR: Of all the players you named, the 100% keeper (and future star) is Ken Giles. He throws fire, strikes everyone out, and already has that closer's swagger. He traversed three levels in two years, and started 2014 at Double-A. He's unstoppable, and in case you couldn't tell, I'm pretty much in love with him.

But there are other players besides Ken Giles. Probably. Freddy Galvis is smooth as can be in the infield, but the guy can't hit, so he'll never be more than a bench player. But that's OK. The world needs bench players! Cody Asche and Maikel Franco are going to make the Phillies' decision at third base very interesting in spring training, since Franco isn't great on defense, but he has incredible potential as a hitter. Asche doesn't have the ceiling as a hitter that Franco does, and his defense isn't super, but he's had some timely hits this season and at least appears to be improving incrementally on defense. We wouldn't be having this conversation if the Phillies would ditch Howard and put Franco at first base where he truly belongs, but that is never, never, never going to happen, so here we are.

Domonic Brown has had a disappointing season, but he's been league average-ish since July, so that's at least a tiny bright spot in his crappy season. I have no idea if they'll keep him or not. It's a coin flip at this point, since he could be a great fix-up project for an enterprising hitting coach, which the Phillies do not currently employ.

Ben Revere is a delightful weirdo who can steal a good base and get infield hits with the best of 'em, but he is a mess in the outfield. I don't see him sticking around for a long time, but since the Phillies' future All-Star center fielder is currently in the Arizona Fall League, we've got a few more years of Revere left to go. As for David Buchanan, no one could have predicted that he'd do so decently this year. The Phillies are in desperate need of starting pitching, so if he can keep it up, I'd wager that he's got a place in the 2015 rotation. 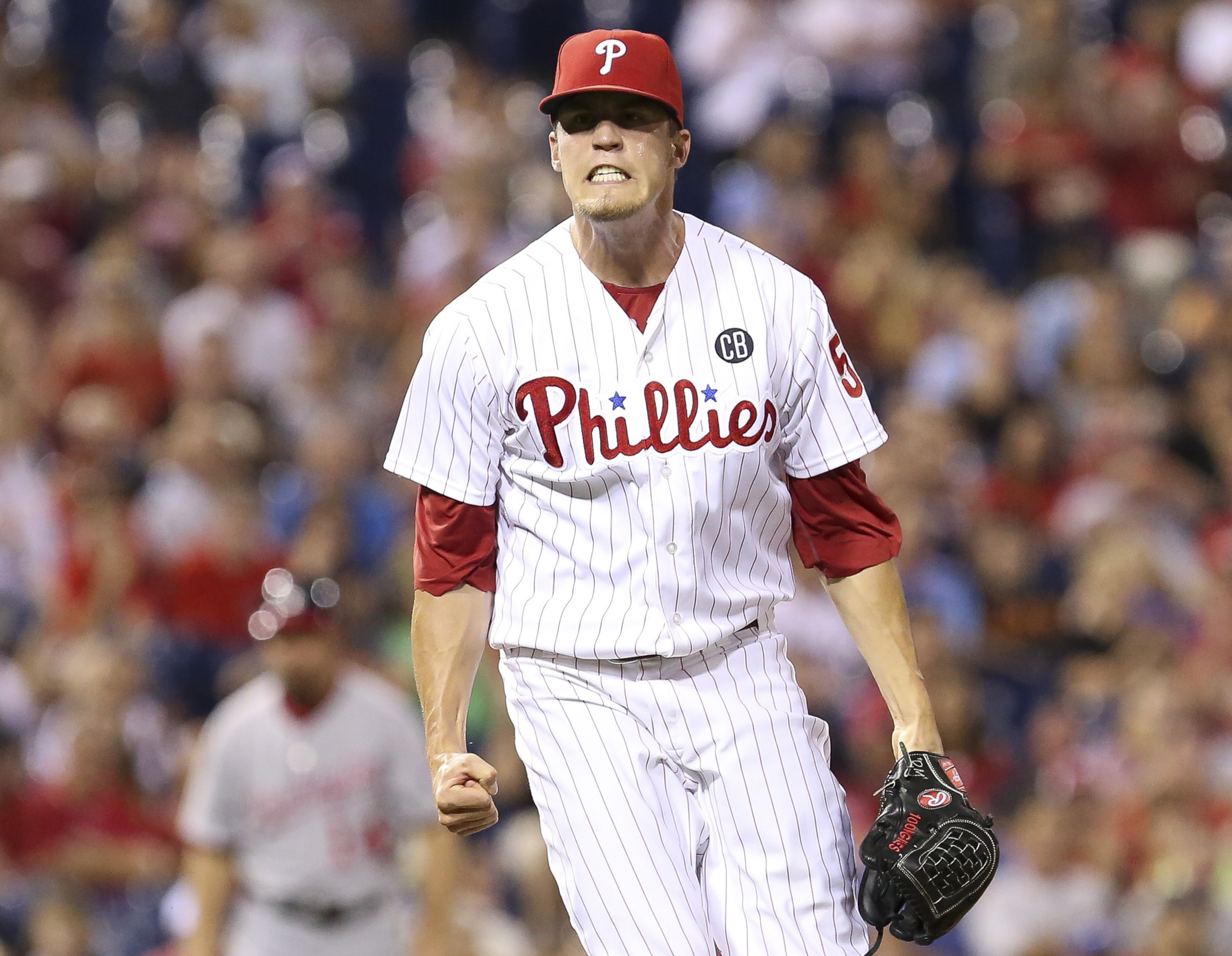 ... and that's what he looks like when he's happy. You don't want to see Ken Giles when he's angry. -- Photo credit: Bill Streicher-USA TODAY Sports

4. Can you please write us a haiku or a limerick about general manager Ruben Amaro Jr?

LR: I'm terrible at poetry, so I'll ask my gaggle of writers if one of them can come up with a haiku or limerick for you.

(Editor's Note: They did, and then some. Next time you want to complain about Billy Beane over-tinkering with his roster, remember what it's like to have an actual bad GM.)

Ruben Amaro
has nude pictures of all in
Phils' ownership group
(By David S. Cohen)

Amaro, he sure likes his vets.
With vesting options all hedging his bets.
But now they're just bad,
And we are all sad,
Because this is as awful as it gets.
(By John Stolnis)

The GM named Ruben in Philly
Is often accused of being silly
With the options that vest
You could say that, at best
He should be the assistant to Billy
(By Peter Lyons)

Ruben used to be
The Phillies batboy, can he
Have his old job back?
(By Peter Lyons)

Analyze numbers?
Ruben counts on his fingers
only from aleph null
(By LTG8)

The players are old and expensive
The blight in the minors, extensive
'Cause he traded for aces
Who used to break faces
The rebuild has made us all pensive
(By Peter Lyons)

Thank you, Liz, for participating in the Q&A!

The series starts tonight. First pitch is scheduled for 6:35 p.m., Lester vs. Buchanan. If you go to the stadium, at least you'll get fireworks at the end ... unless the pyro guy is also in a slump and shoots them all in the wrong direction by accident so that they're invisible from the field.