Reasons to hate every MLB team

Haters gonna hate. But we have reasons.

Share All sharing options for: Reasons to hate every MLB team

With the weak, pathetic nose dive of the A's season (hopefully reversed, fingers crossed), I found myself getting more and more bitter. The longer I watch baseball, the more I find that I hate almost every team besides the A's. Of course, if the A's end up losing their way out of the postseason, I will hate them most of all.

However, with 162 games a year and the advent of interleague play, there's plenty of opportunities to build a healthy distaste for every squad, not just your own! But even us grumbling curmudgeons like to know that our hate is rooted in something. Something I tell you!

Of course, when you hate all other teams, you're always going to be stuck knowing that two teams that you hate are playing each other. That's why you need those reasons I was talking about. Some are more egregious than others. Also, the standings help. The hate can be set aside to make sure that you are rooting for the appropriate outcome for the one team you don't hate (and perhaps actually like). Sometimes grudging respect sneaks through the hate and makes that decision for you too. Now you may not hate every other team, which is fine. However, in case you were in the market for hating everyone and everything, this guide might be useful for you. You might not even know you hate a team yet; I just want to help. I've come up with some loose categories and order, but there's plenty of overlap. You'll get the hang of it. Now just relax and... 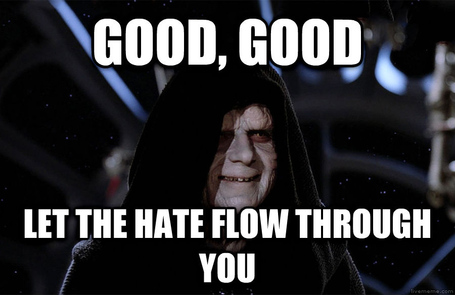 As an A's fan, these are the obvious teams to hate. You may not hate them, but even if you don't you probably understand why most A's fans do. The low-hanging fruit if you will.

It's easy to develop a healthy hate for the rest of the teams in the division. The more you see them, the more you detest everything about them. In this era of an unbalanced schedule it feels like every home game is against one of these useless squads.

These NL teams have reasons to be loathed that are universal, that almost transcend the game itself. You don't have to be an A's fan to see them for what they are.

The Teams that Barely Even Try

Once in a while they decide to compete. But these perennially non-competitive franchises generally just waste all of our time and often waste the careers of great talents who have the unfortunate fate of landing on one of these squads.

Look, there are some teams that have that air of likability. That really haven't wronged us in any way as A's fans. But if we dig deep, we'll find a way to hate them too.

Teams full of easy-to-hate players or a generally douche-like philosophy:

Last, but not Least, Your Favorite Team

The Oakland Athletics, the team that you love so much that they can piss you off more than all the other teams combined, in more ways than you can imagine. Sigh.