With the A's and Mariners squaring off for three games, I asked Logan Davis of Lookout Landing a few questions about his favorite team. Here's what he had to say!

This is it. The Oakland Athletics have three games against the Seattle Mariners and they need to win two of them. The A's currently hold the first Wild Card, one game ahead of the Detroit Tigers and 1½ games ahead of the Mariners. Get swept, and they're out of the Wild Card. Lose two, and they likely get passed by the Tigers and fall behind the Mariners in the loss column. There will be 11 games left in the regular season after this series. There is no more time for patience and no more time to wait for upward regression. It's do or die for the next two weeks.

I find it annoying that the A's are facing the same three pitchers who they saw a little over a week ago. I wish MLB would stop scheduling like this, with the same team showing up 10 days after the previous series opener, because it leads to this situation and it's happened several times this year. The Mariners have two more starters (Hisashi Iwakuma and Roenis Elias), but we last saw Iwakuma in July and Elias in May. This will be the sixth time we've seen Felix and the fifth time Young has started against Oakland. Just seems like a sub-optimal scheduling quirk, even considering that one of those Felix matchups was set up intentionally by the Mariners.

That, and playing your entire season series against another team in a two-week span, as Oakland did with the Royals and Yankees this year (and as the Angels got to do with the Red Sox, after they'd already dismantled their team at the trade deadline, whereas the A's had to face them earlier in the year with their star rotation intact). (Note: I'm not blaming anything on these schedules, just saying it would be nice to find a way to improve what I see as a weakness in what I understand is a terrifying complex scheduling process. I'd rather see as many different players as possible just for entertainment value, and if I'm going to see a team only twice then spread them out so I see them at two different points in their season.)

Mostly, complaining about the schedule meant that I didn't have to write another paragraph about the A's in this space. We all win.

1. The Mariners are 79-66, a half-game out of the second Wild Card. If current trends continue, they should pass the A's in the standings by the end of the weekend. Given the additions that Seattle made in the last year, is a playoff berth a requirement for you to consider this season a success? Or has this year already exceeded your expectations just based on the fact that the team is legitimately contending?

Checking out the schedules of everyone in the West

Checking out the schedules of everyone in the West

LD: There's something interesting in there about the difference between exceeding expectations and actually succeeding. I thought the Mariners were a .500 team before the season began, so they've absolutely exceeded my expectations. Whether or not they've succeeded, is ... a lot more arguable. It's hard to blow $240M on a superstar second baseman, miss the playoffs, and then say "we achieved all of our goals for the year," y'know? Imagine your kid is a D student in high school, and over the summer you work really hard with her and get her to the point where you expect her to have the study skills for straight C's. Then she comes home with her report card at the end of the year and it's got B's top to bottom. Awesome, right? But it's not like she's making the Headmaster's list all of a sudden. So it depends on your definition of success. If the Mariners are still playing after Game 162, that's a success for me, but every fan is entitled to set their own definition of "success."

2. You probably knew that Robinson Cano and Kyle Seager would hit well. Who is one other hitter who has pleasantly surprised you this year? Who did you have high hopes for that left you disappointed?

LD: Actually, I'm gonna challenge the prompt a bit here. I knew Seager was an above-average hitter, but I always thought he was more of a solid all-around guy than a legitimate offensive force. A No. 2 hitter, not a cleanup man, you know? But here we are, and it's September, and his neighbors on the ISO leaderboards are Adrian Gonzalez and Michael Morse. Their neighbors on the ISO leaderboards are Ryan Braun and Yoenis Cespedes. His ISO is up thirty points from his previous career average, and that's put him in the top thirty major league hitters by wRC+, and now suddenly he's top-10 by WAR. Kyle Seager used to be great for a Mariner. This year, Kyle Seager's been legitimately great.

I had to cheat a little there, because the rest of the team's offensive performance has been thoroughly depressing. Dustin Ackley was on fire from the All-Star break until his ankle injury a few days ago, but his first half was so putrid that his season line is still just .250/.300/.400. Brad Miller has alternated between "amazing" (143 wRC+ June, 141 wRC+ August, 200 wRC+ September) and "amazingly terrible" (49 wRC+ April, 28 wRC+ May, 38 wRC+ July). Michael Saunders was better than usual until he got hurt like five times. Mike Zunino is closing in on a full season with more HBPs than walks, which is hilarious and you should all totally root for it to happen. None of those guys have been awful disappointments, but it's hard to call any of them breakout stars.

Mike Zunino and the potential for catcher fatigue

Mike Zunino and the potential for catcher fatigue

On the flip side of the coin, the Mariners' 1B/DHs have been total busts. Corey Hart's signing was praised as a good buy-low when it happened, but his knees still haven't recovered from their 2013 injuries and he's been either DL'ed or ineffective all year long. Kendrys Morales is seriously regretting sitting out the first half of the season. Justin Smoak and Logan Morrison are having the worst years of their already crappy careers. The Seattle DH with the highest WAR is Jesus Montero, who was suspended when he charged into the stands with a bat after a team cross-checker had an ice cream sandwich delivered to him in the dugout. That was not a joke. In a surprising year, it's been the Mariners' continued inability to find anyone who can produce offense from the typical power positions that has held them back.

3. Same thing, but with pitchers. We all knew about Felix and Iwakuma. Who else made the biggest mark in the rotation, and who made you feel let down? Was there a particular reliever who unexpectedly stepped up?

LD: Literally everyone. If you want to know why this team, which I thought would be around .500, is right there in the wild card race, just look at the pitching staff. If you rank every starter in the last hundred years by their ERA in their first 10 starts, James Paxton is No. 2. Roenis Elias went from a Double-A nobody to a respectable back-end guy. Chris Young is going to win Comeback Player of the Year. The rotation's biggest disappointment has been Taijuan Walker, who has a 2.82 ERA. The bullpen has the second-lowest team ERA- of the DH era, after only the 2003 Eric Gagne Dodgers. It's absurd. The Mariners made a horrible mistake in the offseason when they failed to invest in a respectable starter for rotation depth, and they were bailed out by a bunch of incredible performances from nowhere.

Brandon Maurer was disappointing, I guess. Then they moved him to the bullpen. Now he has a FIP between Greg Holland's and Kenley Jansen's. It's been that kind of year. 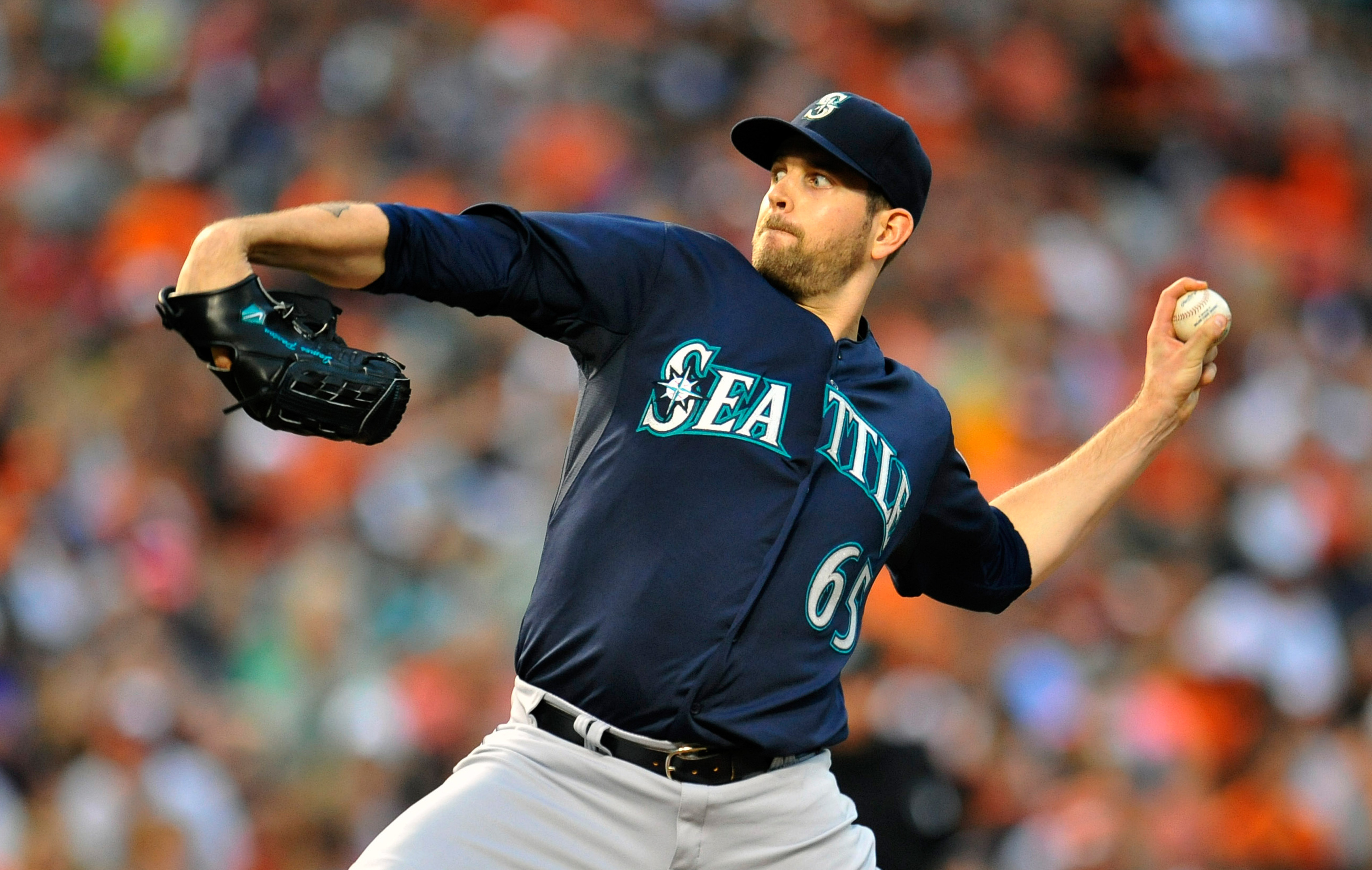 James Paxton is only one of the best rookie pitchers in baseball history. No big deal. -- Photo credit: Joy R. Absalon-USA TODAY Sports

4. Now that you've seen a full season of Lloyd McClendon as the team's manager, what are your thoughts on him? What are his strengths and weaknesses? Do you feel like he made the team better or worse, or was he a neutral presence?

[McClendon] told reporters who'd questioned his decision to give Felix extra rest that he hoped to be buried upside down, so they could kiss his ass.

LD: I'll begin by disclaiming that I don't have any idea how to properly evaluate a manager. So much of their job is behind the scenes that I can't fairly say I have any idea whether McClendon is good at his job on the whole. He's been pretty good at the in-game stuff; the management of the pitching staff in particular has been excellent. He has a quick hook for starting pitchers, which has really helped the team's ERA (though it helps to have a terrific eight-man bullpen). Fans have been occasionally frustrated by his rather old-school lineups -- there was a while where the Mariners were hitting James Jones and Endy Chavez first and second -- and his spring training favorites almost all face-planted, but he also didn't make a point of sticking with any of the failed experiments for too long.

Mostly I love Lloyd because he gives great quotes. After Felix's last outing against the A's, he told reporters who'd questioned his decision to give Felix extra rest that he hoped to be buried upside down, so they could kiss his ass. Given that I lack the information necessary to evaluate managers, and given that their impact seems to be generally negligible, I'm comfortable rating them based solely on how much they entertain me. So I guess that makes Lloyd a winner.

5. Do the Mariners have any intriguing September call-ups for A's fans to keep an eye on?

LD: Taijuan Walker and James Jones are the big ones. Walker's the new emergency starter in case any of the big SPs have terrible first innings; the A's saw him in the last series and didn't have very much fun. That's understandable. It must be pretty freaking hard for a hitter to shift timing midgame from Chris Young slopballs to Taijuan Walker flaming death. If Young continues to struggle, he'll be replaced by Walker before the end of the season. As for Jones, he's being used exclusively as a late-inning pinch runner and defensive replacement, and he's excelled in that role. JJ the Jet Plane can't hit a lick, but he sure can fly: he has 25 steals and has been caught only once so far this year. He's not afraid to steal third, or swipe bags late in games, and against Oakland's substandard defensive catchers I'd expect him to be used aggressively. Between the best bullpen in baseball shutting down opponents and James Jones making leadoff walks functionally equivalent to leadoff triples, the Mariners should have a big advantage in late-and-close situations.

6. Can you please write us a haiku or a limerick about general manager Jack Z?

GMZ's job was in trouble:
he needed to win on the double.
So he signed R. Cano,
but went cheap with LoMo...
and now his team's stuck on the bubble.

Thank you, Logan, for participating in the Q&A!

The series starts tonight. First pitch is scheduled for 7:10, Hammel vs. Paxton. Both pitchers won their last starts in the previous A's/M's series, though Hammel's line was slightly better. He has allowed a total of four runs in his last three starts combined.