With the A's and Mariners squaring off for three games, I asked Patrick Dubuque of Lookout Landing a few questions about his favorite team. Here's what he had to say!

It's a new month for the Oakland Athletics, and I don't want to talk about the one we just finished. All that matters is that it didn't go well and the team is now five games out of first place after spending most of the season as the best team in baseball. It's time for some comeback magic.

Chris Young was a running joke to start the season, but the 35-year-old has a 3.17 ERA (117 ERA+) in a couple dozen starts. Based on the last couple months, Young is a good bet for six innings and two runs on any given day. On the other side of the age spectrum, 25-year-old rookie James Paxton is finally healthy and boasts a 1.65 ERA in five August starts. And then there's Felix. It's never good to see him, but at least a Lester vs. Felix matchup is can't-miss baseball and serves as a possible preview for the AL Wild Card game. In Seattle's last four series, the team dropped two of three to each of the Phillies, Rangers, and Nationals (and swept Boston), so the Mariners aren't exactly red-hot right now either. They also have a lot of new players since we last saw them in early July, so check out the Q&A to learn more about them.

1. Seattle's big deadline acquisition was outfielder Austin Jackson, acquired from Detroit for spare infielder Nick Franklin. The Mariners also added Chris Denorfia from the Padres. Do you agree that the outfield was an area that needed to be addressed? Either way, has it improved with Jackson and Denorfia on board? How would you rate each trade, both in "wisdom at the time" and "how it's turned out since"?

PD: The outfield was definitely Seattle's most glaring weakness, and has been since spring. This is a team that started Corey Hart in right field on Opening Day, and expected that fact to continue somehow. Then Michael Saunders strained an oblique, and the M's were left with an outfield featuring both Endy Chavez and James Jones. Chavez is one of those players casual fans love because he always seems to get a hit every night they watch; they don't think about what the triple-slash of a perpetual one-single-in-four-at-bats looks like. Jones looked like a poor man's Juan Pierre, which would actually be pretty useful, but he wound up as a poor man's 37-year-old Juan Pierre.

Jackson and Denorfia have somehow managed to limbo under this low bar in their brief tenure, and both are probably pressing. The Denorfia trade is impossible to lament, given that he was basically free. It's impossible to properly criticize the Jackson trade because it's impossible to know what it would have taken, if indeed it were even tried, to forgo Jackson and Detroit and just acquire David Price instead. But if we ignore what we can't know, Jackson is extremely useful for the M's not only this year but next -- they don't have any outfielders, especially in center, near the top end of their system. He's not this bad!

2. The Mariners also re-acquired DH Kendrys Morales, but he wasn't hitting well before his arrival (63 OPS+) and still hasn't been since (80 OPS+). Was he a smart addition at the time, or did you see this coming? Do you have hope that he might turn it on and return to glory before the end of the season?

PD: It's hard to equate Kendrys Morales with glory at all at this point. For all the goodwill Jack Zduriencik has engendered this season (read: some), Morales is the purest example of his biggest flaw: an unquenchable thirst for fence-swingers. Again, the price was cheap, but the Mariners already have a Kendrys Morales in Tacoma by the name of Justin Smoak. The trade was fun just from the standpoint of the sheer hubris -- Morales lost a lot of money by refusing to take the team's qualifying offer last fall, and reportedly rebuffed them several times in the offseason -- but in the end he's just another part of the team's pile of 1B/DH types.

Thoughts on a #6org

Thoughts on a #6org

PD: This is the single hardest question to answer. The Mariners community had basically given up on Ackley, who didn't help himself with a perpetually blank, lost expression. One of the surprising aspects of his turnaround is that even before he started hitting, the converted second baseman (and first baseman, and center fielder in college) turned out to be a fairly capable defender in left field, despite all appearances. The most noticeable change in his approach is that he's started swinging more at everything, taking his chances early in the at-bat rather than getting himself into two-strike counts.

Is it real? It's always real, and it never is. Ackley has had a reputation for struggling with confidence, something that imbues hope and fragility into every hot streak of his career. Maybe this time he's figured it out. Regardless, there are bigger holes on this roster, so he'll keep getting chances. It's been fun for now.

4. Logan Morrison is also heating up, with a .728 OPS in August. Is first base finally not a weakness anymore?

PD: It's still a weakness. While he's finally getting some singles, Morrison still has plenty of flaws -- like all new Mariners, he saw a precipitous drop in his walk rate, and he simply doesn't have the power to compensate. He's also no Keith Hernandez around the bag. If he rediscovered both the power and the batting eye, he'd be Lyle Overbay, and when a player is looking up at Lyle Overbay you probably can tell where he stands (or drowns). It's possible that we're still not seeing Morrison at 100 percent, but it's even more likely that we're just never going to see that Morrison ever again. 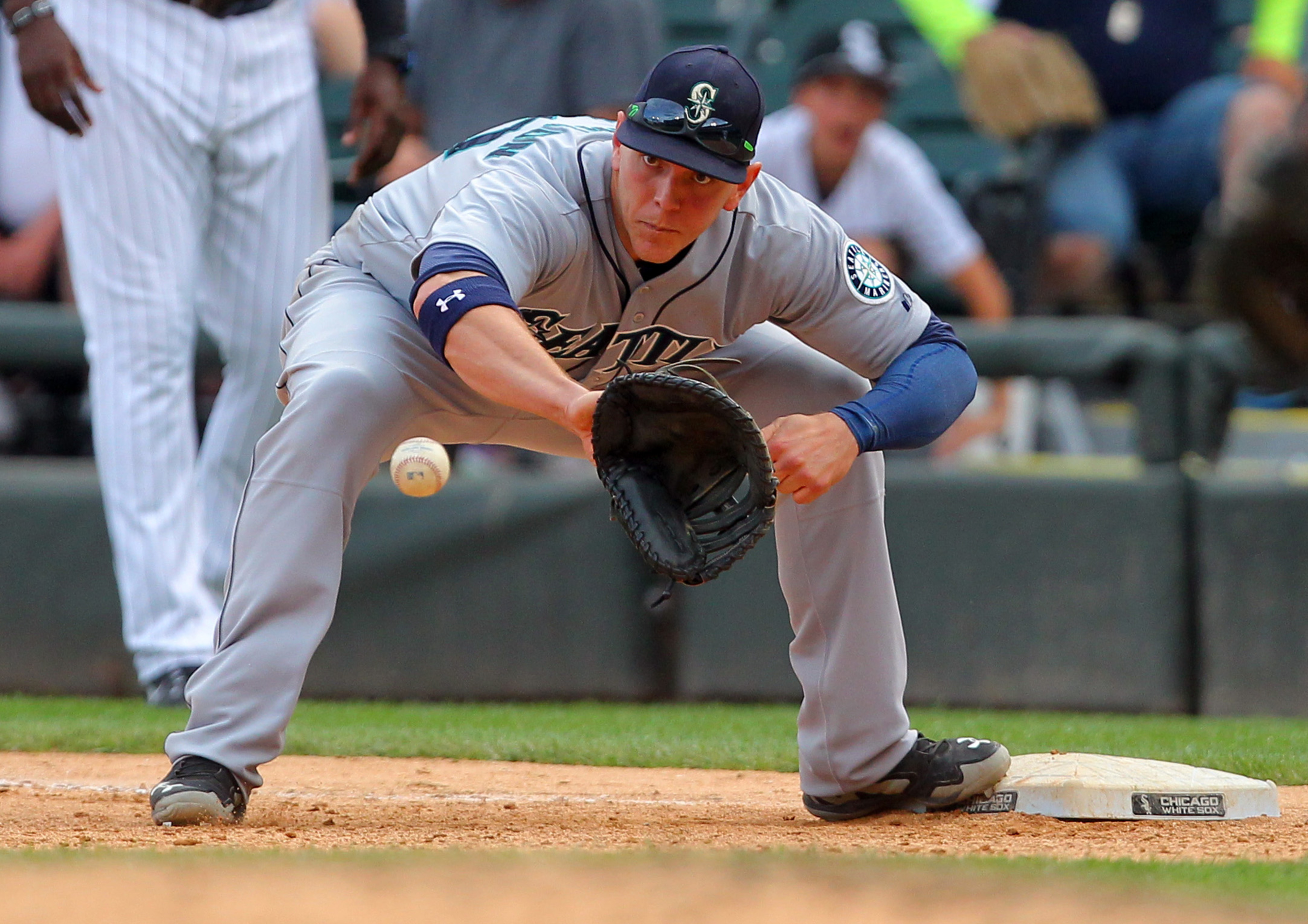 LoMo doesn't look like much, but he's better than the team's previous plan of "Smoak if you got him." -- Photo credit: Dennis Wierzbicki-USA TODAY Sports

5. Chris Taylor is a 24-year-old shortstop who is hitting .310 in 98 plate appearances. Who is he, and should we be afraid of him?

PD: Do you scare easily? The most natural comparison for Chris Taylor is the guy he replaced, Brad Miller. Taylor's a little more consistent with the leather, and perhaps a little more fleet of foot, but without that sexy double-digit home run potential. It's easy to look at the fast start and the .409 BABIP and summon a chortle, but that's the kind of hitter he is -- at every level, his BABIP has hovered somewhere in the high-.300s. Taylor knows how to make good contact.

A few weeks ago, Ben Duronio at RotoGraphs described his ceiling as Chris Johnson with speed and the ability to play shortstop. So far, that's exactly what he's done. If this keeps up, Taylor profiles as a guy who's never going to kill you, but he'll probably be on base when somebody else kills you.

6. A's fans will get their first look at James Paxton (Tue starter), a 25-year-old top prospect who has been phenomenal this year when he hasn't been injured. What is his scouting report? Do you think he'll be more durable in future seasons?

PD: Paxton was a first-round talent who fell to the fourth because of signability, and climbed the ladder fairly quickly. He throws four pitches, with a fine fastball for a lefty (95 mph), a nasty curve, and an iffy changeup in a glass case. Despite his ascendancy, control has always been his bugbear, which makes his career major league rate of 2.56 walks per nine innings (in eleven starts) so surprising. Watching him pitch, you wonder if he's ever heard the word "mechanics" before. The man has limbs.

The funny thing about Paxton is something you mention in your question: "25-year-old top prospect." Paxton is less than three years younger than Felix, and while pitchers (especially ones with injury problems) bloom at different times, what he's doing really shouldn't be beyond expectations of a player of his pedigree. Shoulder injuries for hard-throwing pitchers should never be underestimated, and there's certainly no reason to think he'll be particularly durable. But it looks as though he'll be good when he goes.

7. General manager Jack Zduriencik just got a multi-year extension, despite the fact that he's received a lot of criticism over a mostly unsuccessful six-year tenure. What are your thoughts on this deal? Are you happy or sad to have Trader Jack around for the long haul? And can you provide a proper pronunciation of his name?

Why the Jack Zduriencik extension wasn't a mistake

Why the Jack Zduriencik extension wasn't a mistake

PD: The news of Jack's extension was met by the community with mixed emotions, and it's not hard to understand why. His regime has drafted generally quite well, and yet has shown little ability to develop that talent, especially when it reaches the majors. His trades are littered with gold (like Franklin Gutierrez and Cliff Lee) and pyrite (like Mike Morse and Cliff Lee). He developed an intriguing statistically-minded staff and then dismantled it because of Chone Figgins (well, almost). According to reporter Geoff Baker last offseason, he dumped his charisma stat during character creation. It's a little surprising he even lasted to see 2014.

Personally, I'm not one of Zduriencik's biggest fans. That said, it's hard to get upset over his extension because it's little more than a token gesture. No baseball team today is going to keep around a general manager they don't want just because they'd have to pay him an extra year; it's a drop in the bucket compared to player salaries. If the team felt like moving on, they would. They won't, of course, but regardless of each fan's individual pessimism or optimism, last week will not have altered it.

8. Can you please write us a haiku or a limerick about Kyle Seager?

There once was a fellow named Seager
Whose skills as a prospect were meager.
You often would hear
"He might stick, for a year,"
Now the experts are slightly more eager.

Thank you, Patrick, for participating in the Q&A!

The series starts this afternoon, with a Monday day game for Labor Day. First pitch is scheduled for 1:05 p.m., Hammel vs. Young. Adam Dunn and Geo Soto are both in the lineup for Oakland, which is great because things almost literally could not have gotten worse than they were in Anaheim (four runs in four games). Jed Lowrie is also back in the lineup.