With the A's and Rays squaring off for three games, I asked Ian Malinowski of DRaysBay a few questions about his favorite team. Here's what he had to say!

The Oakland Athletics are in the closest thing to a slump that they've been in all year. They didn't hit against the Astros or the Royals, both with and without the now-departed Yoenis Cespedes. The ace rotation has been less than perfect. Someone needs to step up and get the A's back in the saddle, as they now host a Rays team that is 10-4 in the second half and 23-9 since June 25.

Of course, one of the keys to that Tampa Bay resurgence was the performance of David Price, who went absolutely on fire. He has since been traded, which means that an ugly Hammel vs. Price matchup is now a more mundane Hammel vs. Smyly affair. Smyly made a start against Oakland in May as a Tiger, and he allowed six runs on five innings thanks to four home runs -- by Moss, Donaldson, Cespedes, and Blanks.

Cobb is an A's killer. In his last three starts against Oakland over the past two seasons, he's allowed five runs in 22 innings (2.05 ERA); in his only '14 start against them, he took a shutout into the seventh. Hellickson is making his fourth start of the season after missing several months due to non-TJS elbow surgery. He's yet to complete the fifth inning this year and, although I'm generally not afraid of him, he did throw seven shutout innings against the A's in April 2013. Wil Myers is still out with an injury, and so is David DeJesus.

1. With Wil Myers out of action, Kevin Keirmaier and Brandon Guyer are getting time in the outfield and are both hitting well. Who are these guys and what should we know about them?

A Q&A with Athletics Nation

A Q&A with Athletics Nation

IM: The Rays acquired Brandon Guyer in the Matt Garza trade, which also brought them Chris Archer, Sam Fuld, and Robinson Chirinos (who is preforming admirably for Texas after suffering serious concussion-related issues for many years in the minor leagues). He's the archetypal tweener -- a good defender who's not quite fast enough to be an everyday center fielder, but whose bat falls just short of what's expected from a corner outfielder. Not quite fitting the archetypes probably makes him an undervalued asset, and he's a perfectly legitimate short-side of a platoon. He's been MLB-ready for a few years, but has had awful luck, seeming to pick up freak injuries every time a spot opens up for him in the bigs. He'll expand his zone, but he makes up for that with above-average contact ability. Right now he's riding an inflated BABIP, but there should be a bit more pop in his bat than he's shown so far.

Kevin Kiermaier is another matter entirely. I'm not exaggerating when I say that he may be the best defensive outfielder in baseball. He has explosive speed, great body control, and a fantastic arm that's bolstered by intelligent routes on balls he can't catch. He seems to always circle around so that he makes the pickup running at full speed toward where he needs to throw. Don't run on this guy. The Rays staff has long known about his defensive ability (they got him in as a defensive replacement in the last game of the regular season last year so that he could be included on the playoff roster), and his ceiling is wherever his bat can take him. Before the year started, Oliver projected him as a 5 WAR outfielder, to collective laughter from Rays fans, but so far he's ahead of that pace. Sure his major-league ISO is better than what he's put up at any level of the minors, but when you see him, you'll understand how it's easy for us Rays fans to believe. There's power in his build.

2. Catcher Jose Molina has a .444 OPS (28 OPS+), but he's known for his stellar defense and pitch framing. Has his glovework been good enough to justify his useless bat, or is it time for the Rays to move on from the 39-year-old? Who else is in the catching picture right now?

IM: Molina has been breathtakingly awful with the bat, and he's also a bad pitch-blocker (due mostly to his general lack of athleticism). Those combine to make most of the Rays fanbase hate him. His release is breathtakingly quick though, and his framing continues to be amazing. Yes, he's sitting on a negative-0.6 fWAR right now, but the Baseball Prospectus pitch-blocking numbers have him as buying the Rays pitchers 122 extra strike this season, which is the equivalent of about 16 runs. That would make him a 1 WAR player, and believe it or not, good value on his $1.75 million contract. It's not easily quantifiable, but young pitchers Chris Archer and Jake Odorizzi have raved about his game calling.

Ryan Hanigan has been a breath of fresh air this year with the bat, and another defensive stud, but he's injured at the moment. Rookie Curt Casali could be a catcher of the future if he can figure out how to bring down his strikeout rate (which ballooned this year with his promotion to Triple-A and then to the majors). There are several prospects below Casali in the minors, but none of them are a sure bet. I imagine Molina will stay around, maddening the fanbase, until the Rays have confidence in a replacement who can back up Hanigan, after which he'll ride off into the sunset, which hopefully means becoming a catching coach in the Rays' system.

3. Sean Rodriguez has one more year of team control and can play second base and mash lefties. Is there any chance that he could be moved in a waiver-wire deal in August, with Logan Forsythe and Nick Franklin around to man the keystone next year?

IM: Sean Rodriguez will still be under team control next season, for his third year of arbitration, so I don't think he needs to be moved right now. That being said, if there's a team this season that needs a right-handed platoon bat who's a plus defender anywhere but shortstop and center field (where he's average) and catcher (where he's the No. 3 option anyway) and is willing to pay well for it, yes, he could be traded. In addition to the presence of Forsythe and now Franklin, Brandon Guyer's emergence reduces S-Rod's value to this team.

4. Ben Zobrist went on fire in July, but Evan Longoria (107 OPS+) and Desmond Jennings (100 OPS+) are having mediocre years at the plate. Is there any cause for concern for either hitter, or has it just been that kind of season in Tampa Bay?

IM: I think there's some cause for concern with Longoria. Last year his strikeout rate rose to levels not seen since he was a rookie. This year it came back down, but his power has fallen with it. The total package is still great, and he's still a player who, if everything comes together for him, will win an MVP award. But it's starting to look like MVP awards should no longer be the expectation for Longo, and that makes it much more difficult for the Rays to be a top-level team.

As for Jennings, no worries. He's an average bat, or a somewhat above-average one (105 wRC+ this season). He's also a good defender in center field. That's a 3 WAR player. 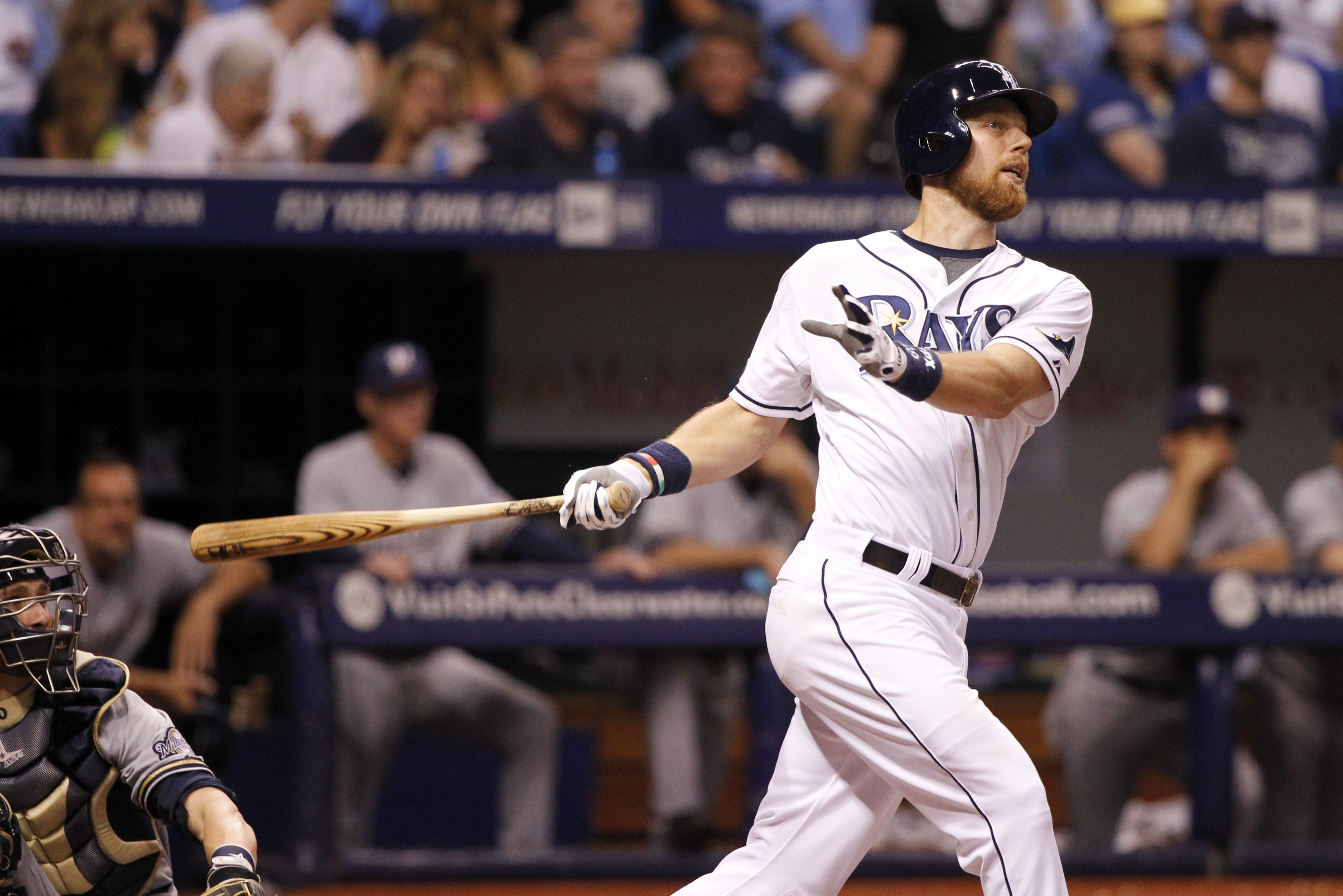 Ben Zobrist was hitting well at the trade deadline, but the Rays held onto him. -- Photo credit: Kim Klement-USA TODAY Sports

5. David Price has finally been traded, after months of speculation. How do you feel about the package the Rays got in return -- Drew Smyly, Nick Franklin, and prospect Willy Adames? And were you surprised (or happy/disappointed) that they opted for MLB-ready players rather than the blue chip prospect(s) everyone expected they'd target?

IM: Originally, I was upset like everybody else and everybody else's mother. But after I ran the numbers, and took a closer look at Smyly, I'm sold. The deal works in a total value sense, and I won't be shocked if he becomes a much better pitcher with the Rays than people seem to think.

6. With Price out of the picture, who do you perceive to be the No. 1 starter on the staff? In fact, how would you rank the entire rotation overall?

IM: Without a doubt, Alex Cobb. He may not have the biggest fastball out there, but he's a No. 1 on most teams. After that, things become a lot less certain. Jake Odorizzi has taken a big step forward this year, partly fueled by having learned a new split-fingered changeup from Cobb, but like many of the other young pitchers, there's some question as to where his ceiling lies. I'd put them in the following order, but all Rays fans might not agree: Alex Cobb, Chris Archer, Drew Smyly, Jake Odorizzi, Jeremy Hellickson. Matt Moore will be back from surgery at some point, but I don't think anyone really knows what that will mean. He might be the best pitcher in baseball, with good command of three plus plus pitches. On the other hand, he might not.

7. Grant Balfour has put up awful numbers this year. Is he still contributing to the team, or has he gone full Jim Johnson and become useless? Who is closing for the Rays now, and how is he doing?

IM: Grant Balfour is personally responsible for at least three losses this season. And beyond those unfortunate sequences, he's pitched badly. He's now been relegated to middle relief where the Rays hope he can regain his form, or at least do less harm. The back end of the Rays' bullpen is just fine, though. Jake McGee has an explosive fastball and command of it to spare. The Rays have kept him away from saves (to suppress arbitration costs, the conspiracy theorists contend), but he's been our best relief pitcher for a long time. Now he has the ninth inning. And with Joel Peralta out due to sickness, Brad Boxberger has laid claim to the eighth inning with a 41.2 percent strikeout rate.

8. Brad Boxberger, acquired in the offseason deal for reliever Alex Torres, is enjoying a fantastic season out of the bullpen -- 2.06 ERA, 14 strikeouts per nine innings. What's his scouting report, and do you think he's really this good?

IM: Boxberger gets it done with a 93 mph fastball and an 80 mph changeup that falls off the table and darts armside. It's the speed differential and elite movement on his change that makes Boxberger tick. Think of him as Fernando Rodney without the overpowering velocity -- but also without the poor control that have plagued Rodney throughout his career.

9. Can you please write us either a haiku or a limerick about Sam Fuld?

Sam Fuld may be short
But a stats darling as well.
Why not poor Eckstein?

Thank you, Ian, for participating in the Q&A!

The series starts tonight. First pitch is scheduled for 7:05 p.m., Shark vs. Cobb. Josh Reddick is hitting sixth in the opener.