Share All sharing options for: Game #135: Do they make condolence cards for baseball offenses? Angels 2, Athletics 0

As I viewed the difficulties the offense was facing in these last few weeks, I encouraged everyone to hold you and the offense in their thoughts. I was so sorry to hear about our loss.

The Los Angeles Angels defeated the Oakland Athletics by the final of 2-0. The Athletics have not scored for 22 innings, since Josh Donaldson hit a home run in the sixth inning of the first game of this series.

Around all the excrement that was the Athletics offense tonight was a golden opportunity when yesterday's Double-A left-handed pitcher Michael Roth entered in relief of Cory Rasmus in the top of the fourth. 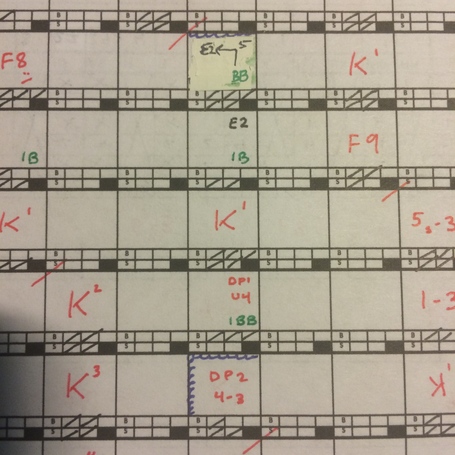 Stephen Vogt worked a walk, and Josh Donaldson was credited with a single on a little nubber that was effectively a good bunt, and reached second on an error when Hank Conger threw away his throw to first into the stands, Stephen Vogt advanced to third on the rulebook two-base award.

Roth pitched to Brandon Moss, and struck him out, and then intentionally walked Derek Norris.

And here's where Bob Melvin completely falls off the rails. Melvin, having watched a Double-A pitcher walk the lead-off batter and see the pitcher get rattled by an error, forcing him to load the bases, decides, with a right-handed pitcher warming up, to substitute out Josh Reddick out and bring in Jonny Gomes, prompting Scioscia to begin his parade of right-handed relief pitchers.

Gomes grounded into an inning-ending double play, because that's what he does against right-handed pitching.

Melvin says of replacing Reddick with Gomes, Herrera coming in to get DP, that move worked for #Angels, they did great job with it.

Tipping our cap to Mike Scioscia. I want to vomit. 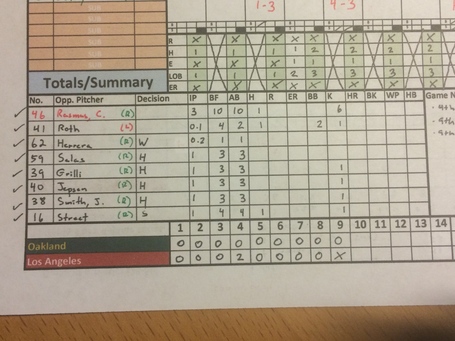 Just vomit all over the place.

The good news: The pitching is still there 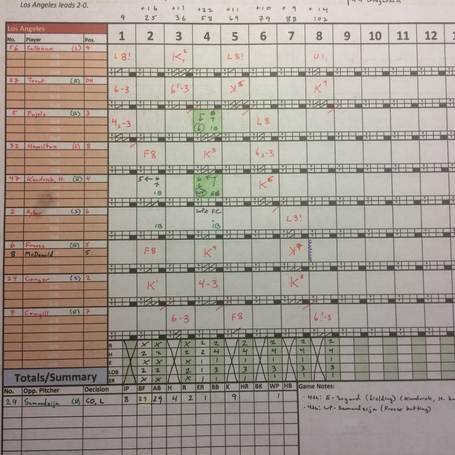 In his only other start on a college football Saturday, Samardzija's Fighting Irish beat the Purdue Boilermakers 20-17 and then Samardzija tossed a complete game, giving up just three runs and picking up the victory for the Chicago Cubs. For the second try, the Irish beat the Rice Owls 48-17, and Samardzija tossed a complete game, and gave up just two runs (one earned), but alas, it was not to be.

Jeff Samardzija is the first pitcher since at least 1914 with a CG loss in a 9-inning game in which the opponent used at least 8 pitchers.

After that crushing top of the fourth inning, Jeff Samardzija took the hill and took Albert Pujols to a quick 0-2 count. Pujols took three pitches, fouled off another one, and dropped a single in here. Samardzija struck out Josh Hamilton, but then Howie Kendrick hit a slow-rolling groundball to shortstop Eric Sogard. Sogard should have had an out at first base, but it instead clanked off his glove and everybody was safe.

Next, Erick Aybar hit a single to short right, With Albert Pujols lumbering around third (Ken Korach was surprised Angels third base coach Gary DiSarcina sent him), Fuld should have had a good chance to get Pujols out at the plate. Instead, Fuld threw to third, overthrowing his cutoff men, but the speedy Kendrick was safe, and Erick Aybar advanced to second on the throw.

The second run scored when Jeff Samardzija threw a ball three feet outside. The ball actually rebounded to Norris, but Norris only had time to turn quickly and practically throw blindly. He threw the ball toward Samardzija just as wide as Samardzija threw his pitch to Norris. Norris' throw also would have been a foot over Samardzija's head if it had been on line, impressive for a 6-foot-6 pitcher.

Samardzija bore down and got David Freese to strike out and Hank Conger to ground out to Alberto Callaspo at second base. In the end, Samardzija gave up only four hits and one earned run in the game, and struck out nine. That should be a winner.

Have respect for the dead

Everyone except Josh Donaldson struck out tonight. Yes, even Josh Reddick in his only plate appearance and Jonny Gomes in his non-ground-into-a-rally-killing-double-play plate appearance. The only person qualified to say anything about anybody tonight, Josh Donaldson with his two infield singles and sitting on a six-game hitting streak, had this to say:

Donaldson said of recent team struggles, "Pretty much everything's been said. Everyone sees it." Team morale? "I think it's pretty obvious."

Try to remember the A's offense during happier times. Nothing can ever make up for losing something close to you, but it feels better that way, at least for a little while.

There is a new game at 12:35 on Sunday against the Angels. Scott Kazmir faces Matt Shoemaker. I'd really like to start writing about the phoenix re-born soon.