The only other time Jeff Samardzija made a Major League start on a college football Saturday, the Notre Dame Fighting Irish beat the Purdue Boilermakers 20-17 to win the Sheleighleigh Trophy for a fifth consecutive year on September 8, 2012. That night, the former Irish wide receiver pitched his first career complete game, the Cubs defeating the Cincinnati Reds by a score of 4-3. Was Samardzija perhaps inspired by the efforts of his alma mater?

Today, the Fighting Irish blew out the Rice Owls 48-17. Let's hope that corresponds to a blowout victory for Samardzija and the Athletics this afternoon as they face the Los Angeles Angels this afternoon, starting at 6:05. The A's will try to set aside the valley they've fallen into, and climb the mountain back toward the division lead, entering tonight's contest trailing the Angels by three games with 28 to play, including five against the Angels.

Samardzija has completed 10 starts for the Athletics now to the tune of a 4-3 record and 3.86 ERA. This is his first game against the Angels this year, though he hopes to do better than how he's faced these Angels in the past: 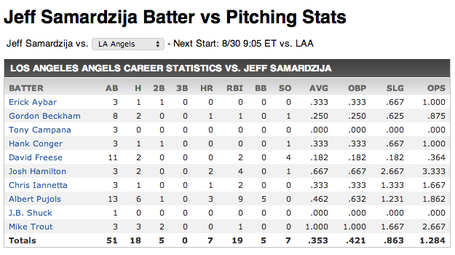 The Angels may try a split-start this afternoon, as right-handed pitcher Cory Rasmus is slated to make his first career MLB start. In his 24 relief appearances for the Halos, Rasmus sports a 2.68 ERA in 37 innings pitched. His longest outing of the year came just last Monday, going 51 pitches and 2⅔ innings while giving up a run to the Miami Marlins.

General manager Jerry Dipoto did some roster maneuvering to perhaps turn what will probably be a short appearance for Rasmus into a split start:

Besides Roth, Angels manager Mike Scioscia indicated after Friday night's game there may be additional left-handed help in the bullpen this evening:

Mike Scioscia will therefore have nine relievers to turn to tonight, as Yoslan Herrera was added for Wade LeBlanc earlier this week.

David Freese returns to the field for the first time since August 27. Before Friday night's game, he had this to say about his starts at designated hitter:

#Angels 3B David Freese didn't seem thrilled with third start at DH in a week. "I don't want to talk about it," he said. "I'm healthy."

Athletics in the outfield

Coco Crisp is not in tonight's starting lineup after sustaining a neck injury in a leap and fall at the wall during Friday night's game trying to save a two-run Chris Iannetta home run. He is unlikely to be available off the bench. Instead, left-handed batter Sam Fuld is in left field, right-handed batter Craig Gentry is in centerfield, and left-handed batter Josh Reddick is in right field.

For the A's against the sudden influx of left-handed pitchers in the Angels bullpen, manager Bob Melvin can turn to right-handed batters Geovany Soto (C) and Jonny Gomes (OF), or switch-hitting Andy Parrino (2B/SS). 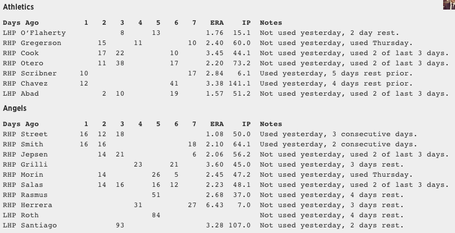 Win just one for the Coco

Coco's got to go, A's fans. It's all right. He's not afraid. Some time, A's fans, when the team is up against it, when things are wrong and the breaks are beating the boys, ask them to go in there with all they've got and win just one for the Coco. I don't know where he'll be then, A's fans. But he'll know about it, and he'll be happy.