When should a team call up a shortstop prospect?

Let's take a look at how age can play into when a ball club should promote a shortstop.

Share All sharing options for: When should a team call up a shortstop prospect?

Is there anything more fun (or pointless) as debating when a prospect should be called up? Everyone's got an opinion, and usually that opinion is the club is handling the prospect incorrectly. I thought I would look at how clubs have done promoting prospects based on age. For this post, I will concentrate on shortstops. Why? For several reasons. 1. Shortstop is a question mark going forward with the A's. 2. Daniel Robertson - Oakland's top prospect - is a shortstop. 3. Apparently Oakland made a trade involving a shortstop prospect. And 4. Several of the MLB top prospects are shortstops. So here we go.

I grabbed WAR and wRC+ data for shortstops based on their age from FanGraphs since 1950. I set the minimum PA at 100. FanGraphs does something funky with how is classifies players, so there might be a little noise in the data. But this isn't a Ph. D. dissertation so let's move forward.

First let's look at simply the number of shortstops to get 100 PA at a certain age. 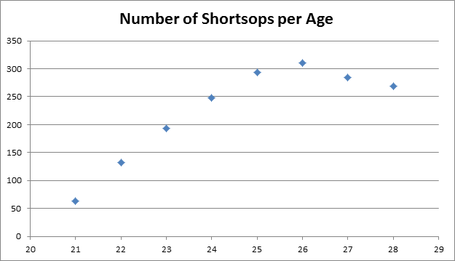 OK. A pretty steep curve until it levels off at age 25. Basically each age year adds fifty shortstops until age 25. We can see pretty quickly that not a lot of youngsters get the call up before age 24. For instance, there have been 2900 shortstop seasons amass 100 PA since 1950; only 412 (14%) are before the age of 24.

So how did they do? Let's look at WAR first. Below is a table showing the distribution of WAR vs. age.

Now for some insight. First, chances are - no matter what the age - teams aren't going to get much out of shortstops. Half of all shortstop seasons - at any ages - have resulted in below 1 WAR. Also, it doesn't take much time to hit this bar. By age 23, about half the shortstops get at least 1 WAR, and the rate doesn't really improve much with age. Age 23 may be somewhat of an important age, because at this age the 2+ WAR goes up to 30% (from 25%) and stays around that number throughout the twenties. Twenty-three year-olds also turn in a pretty good percentage of 3-6 WAR seasons.

Still, if a team calls up a 23 year-old and he amasses .5 WAR over a season, that doesn't tell you much. Half of the players did that. Or maybe it does tell you something. To get a feel for how the WAR distribution moves vs. age, I put together the following plot.

See how the curve changes ever -so-slightly with age? At early ages the curve looks fairly Gaussian (bell curve), but over time the curve starts to spread out more toward the positive side. That age 23 .5 WAR is actually below average, and right on the median. So maybe that prospect isn't the next Cal Ripken Jr. (the Iron Man posted a ridiculous 9.8 WAR in his age 23 season).

Still yet, the curve doesn't change THAT much over time. The standard deviation doesn't tighten up with age, meaning a 2 sigma below average season is just as bad at age 22 as age 26. Nothing is stopping a shortstop from having a great or horrible year at any age (Yuniesky Betancourt can attest to the later). The curves don't show anything absolutely definitive like calling up a prospect after 25 greatly improves the odds for success.

What if we don't believe in WAR and just want to look at the offensive side? No problem. Here is the distribution of wRC+ vs. age.

Don't expect much out of a pre-23 aged shortstop with the bat. Interestingly, there is a spike at age 23 before going back down again at age 24. Then it levels off at age 25. Doing the same thing as before with the wRC+ curves, we can see how the shape changes with age.

Again, not much if any change. The most populated bin does shift to the right with age, going from 70 to 90. Again age 23 is weird. Like the WAR curve, the standard deviation stays pretty consistent (if anything it grows) with age. The average wRC+ only goes up 5 points from age 22 to 26.

So what does all this tell us? Honestly not much. It probably isn't a good idea to call up a shortstop before his 23rd birthday, unless he is Ripken Jr. or Alex Rodriguez. Age 23 is when things can get interesting. Just from a quick look at the names on the list, at age 23 you want to be on the plus side of zero WAR (I can't name any All-Stars from the sub-zero WAR group). Still yet, there isn't any guarantee by waiting until age 25 or 26 he won't fail.

I guess for our debates we just have to keep relying on scouting, minor league numbers, and prospect rankings. You know, basically nothing.