With the A's and Angels squaring off for four games, I asked Turk's Teeth of Halos Heaven a few questions about his favorite team. Here's what he had to say!

The race for the AL West is on. The Oakland Athletics are currently one game behind the Angels in the standings, but the two teams are about to butt heads for four days in Anaheim. By the end of it, the A's could be up by three games, or they could be down by five. Oakland comes in having alternated late-inning comebacks with the Astros en route to winning the series in Houston. This is the time in the season when things stop being polite and start getting real.

C.J. Wilson pitched into the seventh against the A's on Saturday and allowed only one run. Jered Weaver didn't fare quite as well, giving up three runs on a pair of seventh-inning homers, but he still had a quality start. More on Shoemaker and the possibilities for Saturday's starter in the Q&A. Three of Oakland's starters are coming off strong outings -- Sonny (8⅓ innings, 3 runs), Lester (7 innings, 1 run), and Shark (8 innings, 2 runs). Unfortunately, Kaz (3 innings, 7 runs) got lit up by the Angels in his last game. Evan Scribner is back on the roster now that Drew Pomeranz's (successful) spot start is in the rear-view mirror.

1. Right before their last series against Oakland, the Angels picked up second baseman Gordon Beckham from the White Sox. Do you think he's a good addition for the team? What's your first impression now that he's played a few games in red?

TT: ​These are mysteries. A guy who has essentially delivered replacement-level value for five years, but also sympathetic value to the Pale Hose, ​acquired for throwaway dollars? Don't quite get it. The Angels already have a glove-first guy who struggles to hit his weight in John McDonald. He plays all the same positions, but with greater wizardry.

I suspect the logic is that Aybar and Kendrick have been playing non-stop and are beginning to fray a bit, and the Angels think Beckham gives them some extra-base potential off the bench. To me that sounds like Grant Green, who's on rehab assignment at Salt Lake right now, and ready to return. Remember that guy? He's hitting .313 for us as a swiss-army knife.

It's sort of like trading three-plus years of Tommy Milone for Sam Fuld -- there must be some long-term plan, right? Like Fuld, Beckham was useful last night when he knocked a stray one over the fence against Henderson Alvarez, so more of that, please. 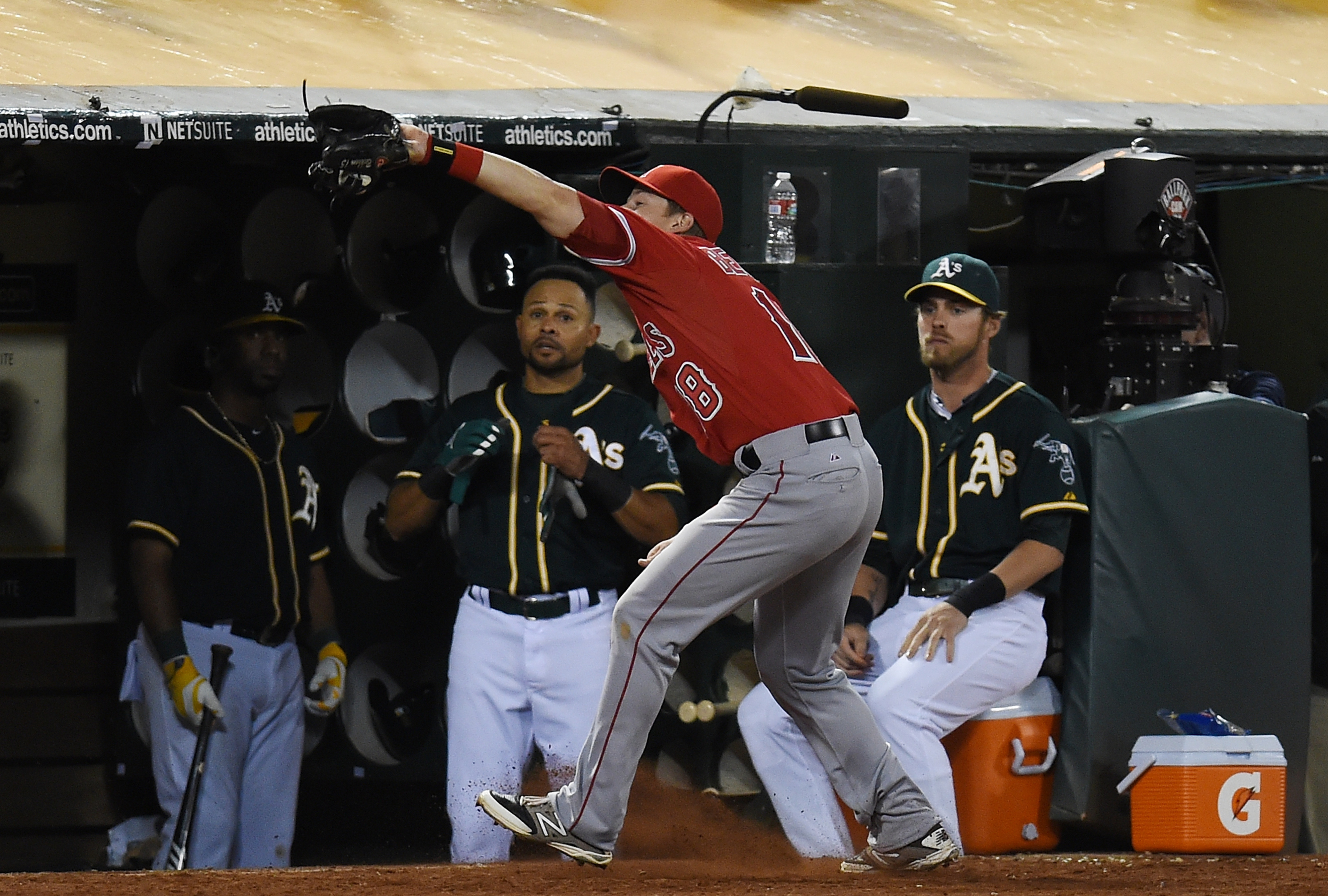 Beckham catches a foul ball by the dugout. These days, I'm not impressed if there isn't a tarp involved.

2. Which hitter in the Angels' lineup instills the most confidence in you right now when he comes to the plate? And if the answer is "Duh, Trout," then who is next on the list? Also, who (or what position, if it's not just one guy) would you consider the biggest weakness in the lineup?

TT: ​That's easy. It's the red warrior, ​the Gentleman Ginger, ​Erstad 2.0​, King Kole Calhoun. Fan favorite, for whom 'clutch,' 'grit' and all the other black-magic Scioscia-ball watchwords fit without eye-rolls and wince induction. The guy rarely puts up a bad at-bat. ​I don't put much stock in clutch stats, but for Kole I'll make an exception because he's always hit well with men on base, going back to college. RISP2 situations this year? .990 OPS. Tie game? .922 OPS. For a recently matriculated dude, nothing phases him.

​Meanwhile, he's the only sensible reason, outside of paint-huffery, that Scioscia should be playing Mike Trout anywhere outside the leadoff position.​ Kole's line as first-inning leadoff guy?.424/.493/.591.

3. Matt Shoemaker (Sun starter) has a better-than-average ERA, a strikeout per inning, and five K's for every walk. What's his scouting report? And is he really this good, or do you think he'll come down a bit?

Halolinks: Santiago and Shoemaker are the answer

Halolinks: Santiago and Shoemaker are the answer

TT: Shoemaker is indeed a sun-starter in the Halo heart. He's like early dawn outside the prison wall. ​We call him Shoebacca -- hear his epiglottal roar! In an epoch of Portland beardoos, Shoe grooms the moss. He's like Hector guarding our perishable joys.

But of course Achilles brought down Hector eventually. We don't know how long this will last. I think Jeff Sullivan's recent piece on Fangraphs summed it up best. There are a lot of reasons to believe in the guy -- beyond the simple fact that these are the guys we should believe in, because it is right and it is just. His arsenal is legit. But in 2009, an unheralded fifth starter named Matt Palmer went 11-2 with a sub-4 ERA for the Angels as well. And that guy subsequently became, well, Matt Palmer.

So let's trust in the present. We don't want to grow up and out of it -- the Shoe fits nicely.

4. Now that Wade LeBlanc is out of the picture, who are the options to start on Saturday and what can you tell us about them? Which one do you think will ultimately get the nod? And do you see the Angels swinging a deal for a new pitcher before the end of the month?

TT: ​The Angels have essentially six fifth-starter dates to arrange before the playoffs. When rosters expand on Monday, there will be a flood of relief arms into the bullpen, and my suspicion is that Scioscia will have the luxury of going inning by inning, and capping some of the more questionable alternatives to three innings.​ They may give one start to Randy Wolf or Caleb Clay (though neither are on the 40-man), and I suspect Mike Roth will get one or two shots, as long as he performs. Roth is a soft-tossing lefty junkballer -- a command-and-control guy who might give you five innings of 3-run ball if there's a warm wind blowing the stars around.

So unless Dipoto goes back to his Arizona peeps and swings a deal for Trevor Cahill (most of the deals Dipoto does are with his former club), I expect we'll see someone like Cory Rasmus pitching a few innings in a coming start, plying into the fierce gauntlet of our bullpen back-end once he hits a certain pitch limit. I'd much prefer that than another locust trade visited upon the green shoots of our brownfields, er, "farm."

TT: ​It's really an ensemble show at this point. It would be easy to say Huston Street, because he's the closing act, but Dipoto has finally built something credible and manifold after three years of trying to glue together dust mites hoovered from a vast black nothingness into the face of Morgan Freeman. By FIP, by WAR, the Angels have the best bullpen in the Majors in the second half. It's not close. The team is now seven-deep in relievers with ERAs under 2.70. Even the mid-2000s bullpens were not this profound. Yes, it's wicked overcompensation for past sins and bluffs, and there's more than a little front office PTSD involved, but there it is: a splendid cork in the bottle.

If I were pushed against a fence, I guess I'd say that rookie Mike Morin has been a little shaky of late. His changeup is probably the best pitch among the Angels' relief corps, period. But he's nearing sixty appearances between the minors and MLB this season, and he recently cut up his foot on a beach. He might be tender in more ways than one.

6. Can you please write us a haiku or a limerick about manager Mike Scioscia?

TT: ​An equivocal haiku in the middle of Mike's life journey:​

​They say I must change.​
By the numbers, in their books,
Let me turn the page.

Thank you, Turk, for participating in the Q&A!

The series starts tonight. First pitch is scheduled for 7:05 p.m., Gray vs. Wilson. If the A's win tonight, they'll be tied for first place.