Share All sharing options for: Athletics roster analysis: The case for Tyler Ladendorf to start Thursday night against C.J. Wilson

The Athletics decided to stick with middle infield depth by electing to option Nate Freiman for Drew Pomeranz's start on Wednesday evening. That depth paid off when Eric Sogard was in a position to turn a 5-4-3 double play against Jose Altuve in the ninth inning, and Andy Parrino speared a liner to end the tight contest against the Astros.

Oakland is likely going to face three left-handed pitchers before Nate Freiman can return from his assignment with Class-A Beloit, Wisconsin on September 2: (1) C.J. Wilson of the Angels on August 28, most likely Randy Wolf on August 30, and Roenis Elias of the Seattle Mariners on September 1.

Brandon Moss probably takes over first base duties against left-handed pitching as he struggles to find the swing that disappeared after the All-Star Break (just two home runs since the Break, his last on July 24), Freiman's power against left-handers must be replaced somewhere.

Save for a blip adjusting from Low-A to High-A in 2010, Ladendorf has performed consistently well against left-handed pitching as his career progressed. Looking at 2014 alone one can see the .250 points of slugging difference between Ladendorf and Parrino.

Compare this to what we're getting out of the middle infielders in the big leagues so far:

Unfortunately, Jed Lowrie and Nick Punto and their exhilarating OPSs over .600 won't be back until at least next week.

Chris Kusiolek, a regular in the Sacramento River Cats press box, had this to say about Ladendorf's swing against left-handed pitching:

@jfkooAN I've seen him plenty in Sacramento. Above average defensive middle infielder. Sees the ball better vs LHP with a line drive stroke

I have a feeling that if Ladendorf had not been suspended for a positive drug of abuse test when the A's needed middle infield help, Ladendorf would have played his way onto the club.

Has the long layoff affected Ladendorf?

Adding Ladendorf's 1-for-4 with a walk and no strikeouts from August 27 that has yet to be loaded into Baseball Reference, that's 10-for-34 with a double, three walks, and seven strikeouts for .294/.333/.323. The games on August 22 and 23 were started by opposing left-handed pitchers.

Again, the A's need help against left-handed pitching with Nate Freiman's power stroke against left-handers missing to the tune of four home runs and four doubles in 41 plate appearances for the Athletics this year. They should try to get it by playing Ladendorf at shortstop, with Alberto Callaspo playing second base.

Who knows, we might stumble into a Freiman-like lefty masher for September and the postseason. With Lowrie's return, an excellent Ladendorf and an in-form Eric Sogard might push Alberto Callaspo or Nick Punto off the postseason roster.

The A's used four out of six relievers in Wednesday night's victory, and Dan Otero's 38-pitch effort to earn the win against the Houston Astros likely makes him the last man out of the bullpen for Thursday night if he's even available. Only Jesse Chavez and Luke Gregerson went unused. Eric O'Flaherty, however, has been reported ready to pitch on consecutive days, and both Ryan Cook and Fernando Abad have pitched on consecutive days before. Additionally, the A's have Sonny Gray lined up, who just fired a brilliant bounce-back start against the Angels last Friday, August 22, going 8⅓ innings.

If the A's staff judges that it's more important to bring up a seventh reliever, likely Evan Scribner as he has not pitched since Saturday, August 23.

Otherwise, the A's can wait a day and option Sonny Gray to Beloit, which would allow Gray to make his scheduled start against the Seattle Mariners on Tuesday, September 2. Unlike Freiman, who is using his time with Beloit to stay sharp at the plate, Gray would not actually have to report to Beloit, as he will be recovering from his August 28 start. The A's can pick up a seventh reliever then.

Who comes off the 40-man roster?

To add Ladendorf to the active roster, the A's must remove someone from their 40-man roster. Because none are likely to be significant contributors to the big league club in September, the three starting pitchers in Sacramento on the 40-man roster come to mind: Deck McGuire, Arnold Leon, and Josh Lindblom. Of the three, I think Lindblom is a strong candidate to be transferred to the Major League 60-day disabled list so as to not count against the 40-man roster.

Deck McGuire, 25, was acquired for cash considerations from the Toronto Blue Jays after they designated him for assignment to re-claim Brad Mills, the River Cats pitcher has managed a 7.16 ERA in six appearances, including five starts. Most of those runs can be attributed to having to wear 12 earned runs against the Reno Aces on August 11. Excluding that start, McGuire's 3.25 ERA with Sacramento might be worth holding onto.

This is also McGuire's first year pitching in Triple-A, so there may be a bit of an adjustment factor. In 10 starts for the Buffalo Bisons in the International League, McGuire had a 5.56 ERA, compared against the league's 4.06 ERA.

McGuire will have options next year, and so could continue in Triple-A after spring training.

Leon also will have options next year, and so could continue in Triple-A after spring training.

Josh Lindblom, 27, is the oldest of the three, and the only one with Major League experience. For his career, Lindblom had a 3.92 ERA at the Major League level, mostly in relief, though he has been starting for the River Cats, and started for Texas in 2013. With the River Cats, however, he has managed only a 5.86 ERA in 16 starts, with a 6.4 K/9 and 2.8 BB/9.

The penalty for doing this is that his time on the Major League DL counts as service time. As a player who will be out of options next year, and behind many other excellent bullpen options, however, I'm not worried about allowing Lindblom's service time to click over from one year, 101 days, to just over two years. That will probably be somebody else's problem next year. Placing Lindblom on the 60-day DL also lets the A's hold onto Deck McGuire and Arnold Leon without risking waivers.

Can it be done?

The Sacramento River Cats just returned from a road trip in Tennessee, so they are in Sacramento. There are four more flights on Southwest Airlines that can get Tyler Ladendorf from Sacramento International Airport to John Wayne Airport on time for the 7:05 start:

@stevenEchambers This "figuring out the itineraries" worked for Evan Scribner when he replaced Jim Johnson.

Google Maps says it's about a 15-minute drive without traffic from John Wayne Airport to the Big A: 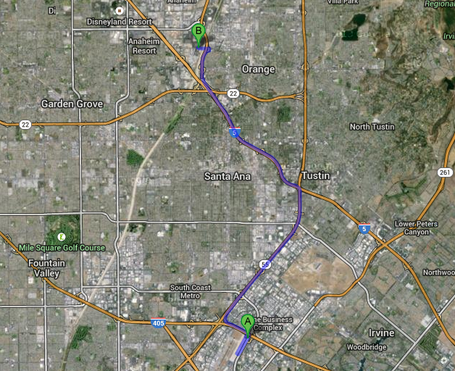 Of course, we should allow for two hours, just in case:

You expect me to read all that?

Tyler Ladendorf might be significantly better than Andy Parrino at hitting left-handed hitters, and can be called up if (read: when) Drew Pomeranz is optioned to Beloit later today. To clear space on the 40-man roster, the A's can move Josh Lindblom to the 60-day disabled list. Then, after Sonny Gray's start Thursday night, the A's can option Sonny Gray to Beloit (on paper, he does not actually have to go to Wisconsin) and call up a seventh reliever that can serve the big league club all the way through roster expansion. Sonny would then return to the active roster on September 2 to make his regular start.

There are plenty of flights from Sacramento to Orange County. John Wayne Airport is only a short drive to the Big A.

Do it Billy. Do it. Free Tyler Ladendorf.

UPDATE (11:10 am): Billy did not free Tyler Ladendorf. There's always tomorrow, if (read: when) Sonny Gray is optioned to Beloit on Friday.