The Oakland Athletics are struggling, and they've been passed in the standings. The Angels are now in ffffffffff. The Angels are in fffuuuuhhhh. They're in fffrrrrrrrsshh. Man, that's crazy, my fingers won't type the sentence I'm trying to write. Let's see, the A's are in second place and the Angels are ahead of them. There we go. Now the Angels are coming to Oakland for the most important series of the season so far. The current difference is two games. By the end of the weekend, the A's could be back in first, or they could be five games behind. Things are getting real, fast.

Santiago has faced the A's twice this year and dominated them both times. His total line includes one run in 13 innings, with 11 strikeouts and two walks. The only run came on a solo homer by Yoenis Cespedes, so that doesn't help. And Santiago has a 2.59 ERA in 59 innings since June 10, when he was called back up from a stint in the minors. Let's hope Sonny is on his game. On the bright side, Wilson and Weaver are not their normal selves this year; more on that in the Q&A.

The biggers news, though, involves a guy who the A's weren't ever scheduled to face in this series. Garrett Richards, the Angels' unquestioned ace this year, tore his patellar tendon (knee) and will miss the rest of the season. It's a huge bummer whenever any player gets hurt, especially a star like Richards. Best of luck to him as he eyes a return in 2015.

1. Kole Calhoun has blossomed into a legitimate star player this year, with an .831 OPS (137 OPS+) and 3.5 bWAR. If you were to rank the Angels' position players from 1 to 13, with Mike Trout presumably in the No. 1 spot, where would you rank Calhoun, and why?

JG: Personally, I'd rank Calhoun at No. 2. He's filled a hole at the top of the order, although I'd bat him second with Trout hitting leadoff, and he's played a very good right field. He's probably one of, if not the most, underrated player in the game this year.

2. I'm surprised to learn that C.J. Cron was demoted to Triple-A. Was it purely based on poor play, or did the Angels need room for someone else? Do you think he'll return to play a part in the pennant run and/or the playoffs?

JG: If I remember right, I think Cron was sent down when the Angels were having bullpen trouble and needed the roster spot for that week's reliever of the week. Taking a quick look at his 2014 Salt Lake City numbers, he's still hitting at a great clip (.339/.401/.558), so I'd have to assume the reason he's still down there is the club doesn't need his right-handed bat. Which answers your next question ...

3. Who is Efren Navarro? He's listed as a utility man on Baseball-Reference, so he sounds like a guy who will hit a couple of homers against the A's.

JG: Navarro is one of those guys who will be around for a year or two (much like Robb Quinlan a few years ago), and then fade away as quietly as he showed up. He hits for decent average, swings a left-handed bat, plays multiple positions adequately, and makes the league minimum. If he hits a couple homers against the A's, he's earned his 2014 paycheck.

4. Garrett Richards went down on Wednesday and it looked bad. What's the latest news on him, and how will it affect the team? Who will take his spot in the rotation?

The Coming 6 Starts for Whoever Replaces Richards

JG: Wasn't that ugly? The word is he's going to be out for 6-9 month due to a patella tendon tear. In other words, his kneecap went where it wasn't supposed to. If Jerry Dipoto is unable to find a decent replacement via a waiver wire deal, the Angels will use one of these fine pitchers: Wade LeBlanc, Chris Volstad, or Randy Wolf. 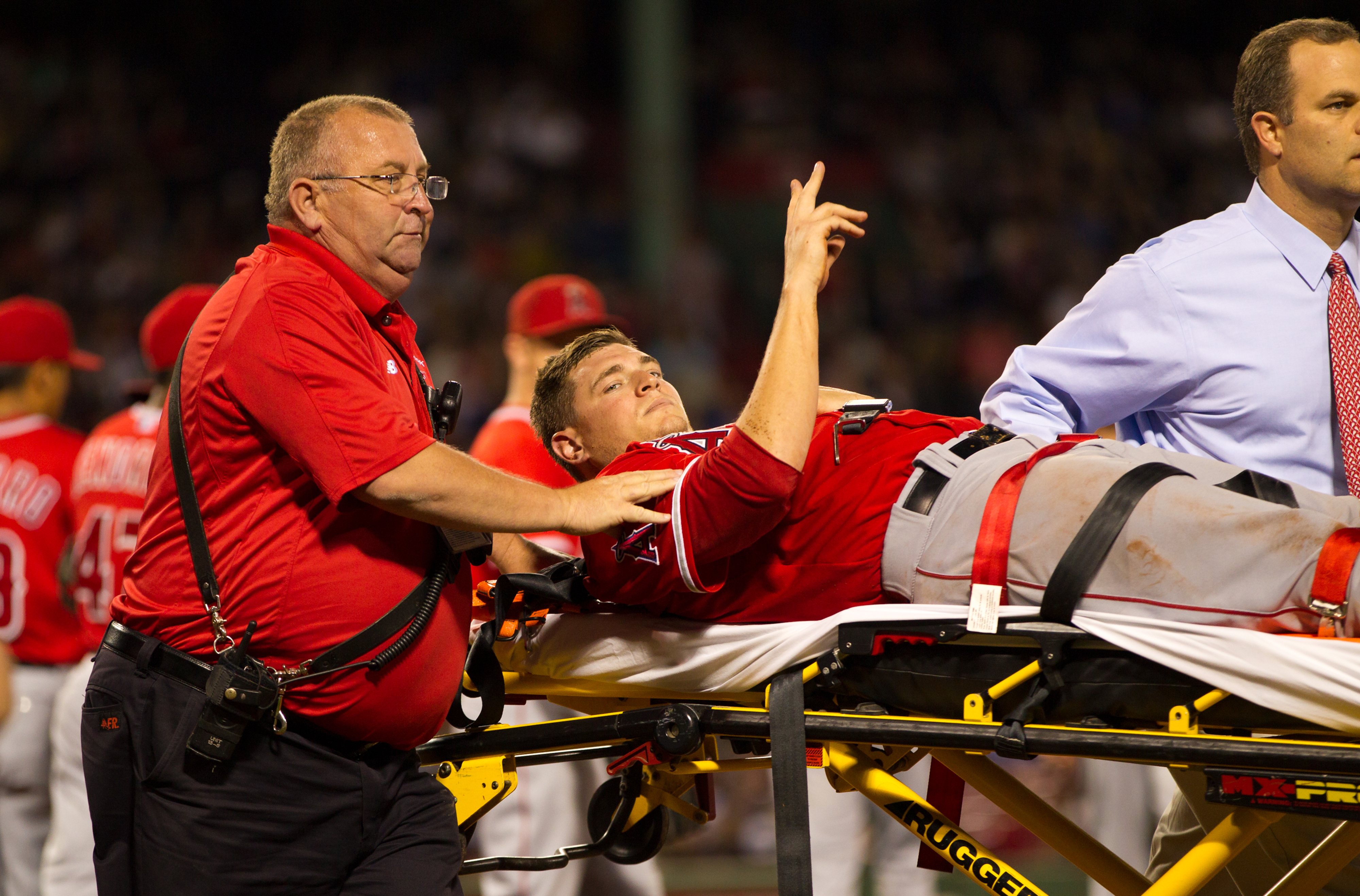 Richards signals to the crowd as he is carted off the field. -- Photo credit: Rich Gagnon

5. Jered Weaver (Sun starter) has his highest ERA since 2009, and C.J. Wilson (Sat starter) has a 6.16 ERA in four starts since returning from the DL. Has their play this year lowered your opinion of them, or are they still dominant starters going through simple off-years?

JG: Hmmm ... I've always been a big supporter of Jered Weaver, so I think this season is just a slightly down year for him. His peripheral numbers are pretty much in line with those over the last couple of years, still striking out the same number of batters, giving up the same number of home runs, and giving up about the same number of hits. I'm not worried about Weaver. Wilson, on the other hand. If he'd just go out there and throw, not pitch but throw, it would seem he'd do so much better. When I watch him pitch, it looks like he's trying to hit a spot the size of a dime, instead of just looking for a location. To me, this looks more like a headcase problem than a pitching problem.

6. The Angels have a new-look bullpen led by Huston Street and Jason Grilli. The highest ERA of any of the seven current members is 2.70, held by Cory Rasmus. (Editor's note: After writing this question, Cam Bedrosian and his 7.59 ERA were added as the eighth man to the pen.) How good is this relief unit, and how big a role has it played in the team's hot play? When will Joe Thatcher be back from injury?

JG: Upgrading the bullpen was Jerry Dipoto's main objective over the last 10 months or so, and he's done a good job of building a shutdown unit. Swapping troubled relievers with Pittsburgh worked out so well as Frieri has since been sent down to Triple-A while Grilli has returned to somewhat his old self. But the true greatness lays with Street and (Joe) Smith. If the Angel hitters can get a lead going into the eighth inning, the game is over. Thatcher is still a ways away as he's yet to throw off a mound. I'm going to guess he'll return Sept. 1.

7. Halos Heaven doesn't like Mike Scioscia. Now that the Angels are on fire and leading all of baseball, has Scioscia earned any love? Or do you see the team's success as coming in spite of him rather than because of him?

JG: I think Dipoto's true intention of improving the bullpen was to make it Scioscia-proof. If all of the relievers are good, manager Mike will be less inclined to use a crappy one in a high-leverage situation. It's all about roles with Scioscia, so if each pitcher can handle every role, there's less of a chance to screw it up.

8. Can you please write us a haiku or a limerick about Collin Cowgill?

There once was a guy named Collin,
who had all the girls a fallin'.
He wasn't the best, but he's not like the rest,
They swooned for the status,
Of his bovine breathing apparatus.

The series starts tonight. First pitch is scheduled for 7:05 p.m., Gray vs. Santiago. Remember to breathe between now and then. Even if this series goes poorly, there are still seven more head-to-head games after this weekend.