With the A's and Royals squaring off for three games, I asked Tyler Drenon of Royals Review a few questions about his favorite team. Here's what he had to say!

Due to the insanity of the trade deadline, I held back the series preview until this morning. As we now know, the Royals stole the first game by the score of 1-0. Here is the rest of the preview, slightly updated to account for that result. The questions and answers were written before Friday's games.

For an off-day, Thursday was awfully busy for the Oakland Athletics. They traded Yoenis Cespedes and Tommy Milone in separate deals for Jon Lester, Jonny Gomes, and Sam Fuld. They already had the best record in baseball (66-41), and now they are slightly better. And now, actual baseball has started again, with the Kansas City Royals in town for three games.

Gray out-pitched Guthrie in every way in the first game, except for a solo homer by Raul Ibanez. Gray's start (7 innings, 1 run, 7 strikeouts, 3 hits, no walks) earned him a Game Score of 74, making it his second-best start of the season by the numbers (the best was his shutout of Texas). And although the team got shut out by a bad pitcher (Guthrie), don't blame the loss of Cespedes, as his replacement (Sam Fuld) reached base twice via a double and a walk.

On Saturday, Lester makes his Oakland debut on La Potencia t-shirt night, so he better hope he does well while a bunch of heartbroken fans wear likenesses of Cespedes. More about Shields and Vargas in the Q&A, though A's fans should be familiar with both of them because we've seen them a million times from their times with the Rays (Shields) and Mariners/Angels (Vargas). This will be Vargas' first start since July 8.

1. While many teams spent Thursday dreaming of trade additions, the Royals instead lost a key player when Eric Hosmer exited the game with a hand injury. What is his status, who will replace him at first base, and how will his absence affect the team?

TD: Last I heard, he'll be out about a month. It looks like the Royals are going to put Raul Ibanez at first, which is exactly the sort of creaky, dust-buried strategy that fans have come to expect out of this organization. Hosmer has been hitting well recently, but he's been a huge disappointment this year. (Editor's note: Wish we'd seen Hosmer instead.)

Hosmer has stress fracture in hand; out 6 weeks?

2. Second baseman Omar Infante was signed last winter for four years and $30 million. How has that signing worked out so far? If you could go back, would you do it again?

TD: No. I think a lot of people were excited by the aggression Moore showed in going after a top free agent at second base. The organization had been mired in a half-decade of Chris Getz, so Infante seems like Robinson Cano to us. Realistically, It doesn't look like a great deal. The Royals are infatuated with Infante's bat-to-ball skills despite his .307 on-base percentage. It'd be different if he was a Gold Glove second baseman, but he's not. He's average, which come to think of it, is a perfect fit for this year's team. (Editor's note: Infante went 0-fo-4 in the opener.)

3. Third baseman Mike Moustakas, once the No. 2 overall pick in the 2007 draft, has been a total mystery in the Majors. He's yet to enjoy a league-average season at the plate in four attempts, and 2014 might be his worst year yet at age 25. However, he has quietly come around lately, with OPS marks of .707 (June) and .770 (July); those aren't great numbers, but they're a lot better than when he was sitting in the .550 range in April and May. Do you still have hope that Moose Tacos will figure it out? And how much do you attribute his problems to the organization and its odd offensive philosophies?

TD: I absolutely still believe in Mike Moustakas. I think he can be a fringe All-Star in his late-20s if he gets the opportunity to play for a good organization -- i.e. Not Kansas City. He's been an excellent defender according to advanced metrics -- top five in baseball since becoming a regular in 2012 -- and he can drive the ball. Since he was drafted, the Royals have been clumping massive expectations on Moose like that scene from Monty Python and the Holy Grail -- this comparison works really well if you remember what the peasants were stacking in that scene. There were billboards of Hosmer and Moustakas in Kansas City before they even got there. The pressure must have been unreal. The same thing happened to Alex Gordon when he was dubbed "The Next George Brett." He turned it around, so maybe Moose can to. He has the ability. He just needs to craft it. (Editor's note: Moose went 0-for-4 in the opener.)

4. What's wrong with Billy Butler? Did the city of Kansas City run out of maple syrup for its Country Breakfast?

TD: That's a really good question. I know "forcing it" isn't really a measurable aspect of the game, but that certainly seems to be the case with Butler. His walk rate is down to 7.3 percent this year from a career-high 11.8 percent last year. Other than that, I don't see any glaring statistical differences. It'd take a much smarter guy than me to figure out what's going on there. (Editor's note: Butler went 0-for-3 in the opener.) 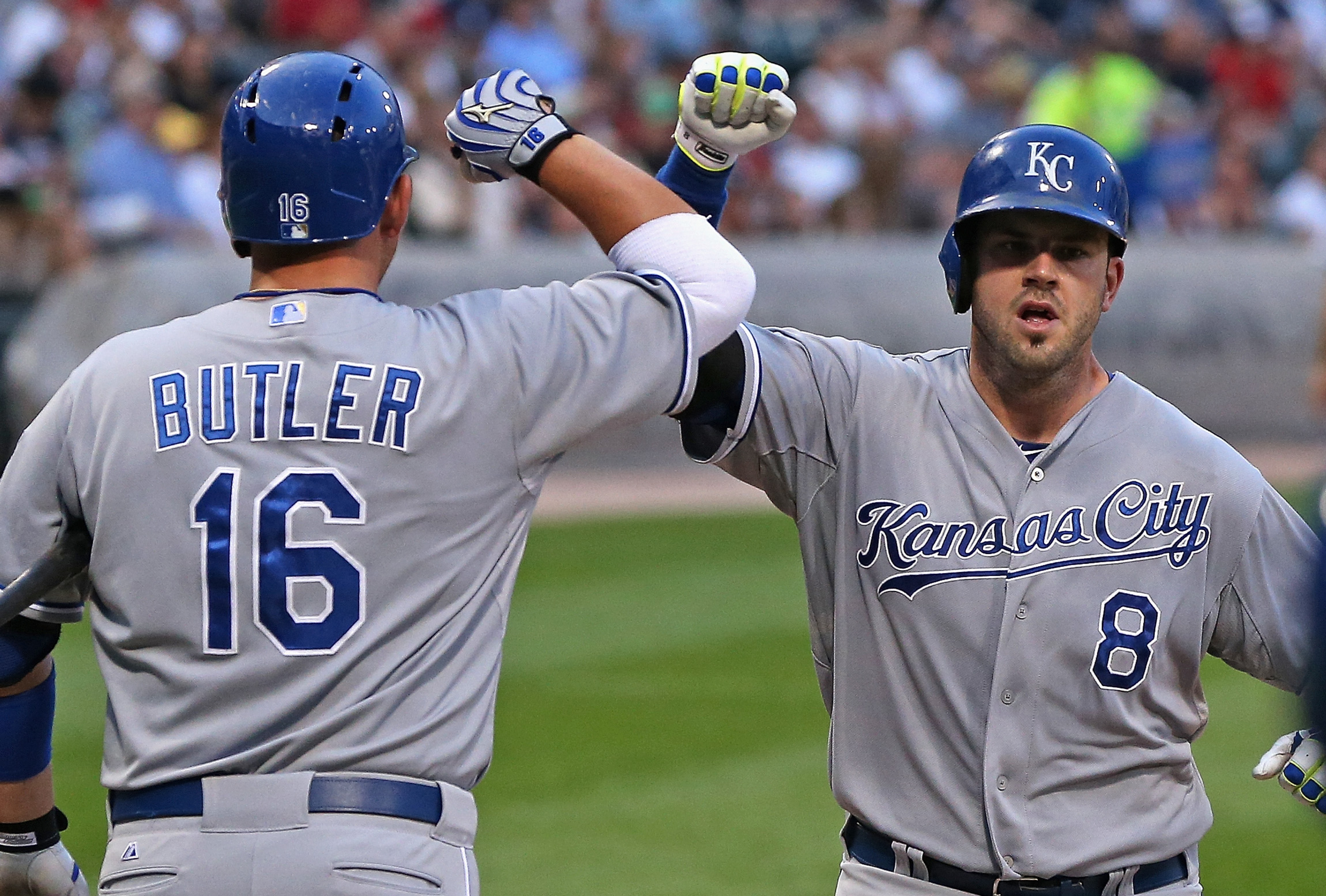 It's been a rough season for Billy Butler and Mike Moustakas. -- Photo credit: Jonathan Daniel

5. Which grossly underrated Royals star do you like more, and why: left fielder Alex Gordon, or catcher Salvador Perez?

TD: Man, that's tough. They're both so under-appreciated. Both were chosen for the All-Star Game, but neither was close to being voted in by the fans. It's kind of absurd really. Gordon is just 0.5 fWAR behind Mike Trout right -- tied with Troy Tulowitzki for second in baseball among position players. Perez is often compared to Yadier Molina because of the in-state rivalry, but he might have surpassed Molina in value already. They're pretty close in terms of statistical value and Perez's contract is just so absurdly team-friendly I think you have to at least consider the notion that he's better than Yadi. Anyway, if I had to choose between the two, I'd say Perez because of his contract -- but honestly, I wish he was making more. He deserves it. (Editor's note: Perez's contract, currently in its third year, is for five years, $7 million, with three cheap team options through 2019, including his first two years of free agent eligibility. The All-Star starter will make $1.75 million next season.)

6. The A's will see three familiar veteran starters in this series: Jeremy Guthrie (4.70 ERA, 87 ERA+), Jason Vargas (3.31, 124), and James Shields (3.50, 118). They each have similar profiles -- they keep the walks down but also don't strike out a lot of guys, making them hittable if you catch them on the right day. Is there anything we should know about their 2014 performances? And why was Vargas on the DL recently?

TD: James Shields has been good, but something of a disappointment compared to last year. He can still go out there and dominate, but I can see him having trouble keeping his pitch count down against Oakland.

Vargas has been a huge surprise. Personally, I wasn't very excited about the Royals' decision to sign him, even though they got him at $8 million a year by stretching out the deal to four years. His FIP/xFIP aren't great, but he's given the team a good chance to win more often than not. He had an emergency appendectomy at the beginning of July and should return shortly. (Editor's note: He's starting Saturday.)

Guthrie started strong, but it's gone downhill of late. The Royals were apparently in on David Price at the trade deadline, but failed to acquire him because of financial limitations, which really makes the Infante and Guthrie contracts hurt. It's hard to get too critical of Guthrie, though. He's a likable guy, which goes a lot further than it should in Kansas City. (Editor's note: Welp. Guthrie's line on Friday -- 6 innings, no runs, 3 hits, 2 walks, 6 strikeouts.)

TD: No. Another grossly underrated player on the Royals is Jarrod Dyson. Ned Yost and Dayton Moore seem to view him as a fourth outfielder only, but he's one of the best defenders in baseball and he's been on base often enough this year to make his borderline-immoral speed count. Will Smith has been great and he's under team control through 2019. Tim Collins is in Triple-A, and the Royals could use a solid lefty in the pen. Plus, Aoki isn't adding much and he'll be a free agent after the season. (Editor's note: Dyson had two hits and a stolen base to prove Tyler's point; Aoki reached base twice from the leadoff spot via a double and a walk because you can't predict baseball.)

8. Between moves like Myers-for-Shields and the Infante signing, the Royals seem like they are in win-now mode. However, on the fringe of contention and with Shields an impending free agent, they failed to make even one move before Thursday's deadline. What are your thoughts on that?

TD: On one hand, Dayton Moore probably would've gotten swindled had he made a move. On the other, he could've added a good player like he did with Shields -- even if it's a long-term negative. I was disappointed that they decided to cross their fingers instead of being aggressive. They aren't in a position to get into the postseason often. (It's been almost 30 years ... seriously.)

9. Would you please write us either a haiku or a limerick about general manager Dayton Moore?

I'm going to borrow from Poe here, but:

Then this bungling goof beguiling my sad fancy into smiling,
By the grave and stern decorum of the countenance it wore,
`Though thy crest be shorn and shaven, thou,' I said, `art sure no craven.
Ghastly grim and ancient raven wandering from the nightly shore -
Tell me what thy lordly name is on the Night's Plutonian shore!'
Quoth the raven, `Dayton Moore.'

Thank you, Tyler, for participating in the Q&A!

The second game is today. First pitch is scheduled for 1:05 p.m., Lester vs. Vargas. Lester threw eight shutout innings against the Royals a couple weeks ago. Vargas is a rich man's Tommy Milone. Jonny Gomes makes his Oakland re-debut tonight and is batting fifth against the lefty Vargas.