With the A's and Mets squaring off for three games, I asked Steve Schreiber of Amazin' Avenue a few questions about his favorite team. Here's what he had to say!

More about Gee in the Q&A. The A's faced Wheeler in June and absolutely smoked him, for six runs in two innings. Statistically speaking, he will probably pitch better this time, even if he loses again. Bartolo Colon is hot, but the A's won't face him this time; in fact, everyone put him in your thoughts a little extra today as he just went on the bereavement list to tend to his ill mother. The Mets are 59-67, which makes them the worst opponent Oakland has faced since the Twins -- it's hard to remember, but that series went quite well. The difference in the division right now is one loss (Angels 73-50, A's 73-51), so a quick sweep of the Mets would be just what to doctor ordered to stem the current five-game losing streak.

1. After seeing most of a full season from 25-year-old catcher Travis d'Arnaud and 24-year-old shortstop Ruben Tejada, what has impressed you and what hasn't? Are either or both a big part of the Mets' future?

SS: I think most Mets fans would agree that d'Arnaud is pretty large part of the Mets future, while Tejada could be a part of the team going forward but it shouldn't be as the starting shortstop. There was a bit of concern with d'Arnaud early in the season when he was struggling at the plate but he was demoted to Las Vegas, made some adjustments, and has been much better since the Mets recalled him as he's hit .266/.313/.481 with 7 home runs and 10 doubles. Aside from the power he's exhibited, I think the most impressive thing is his pitch framing, which has always been a strength. He still has some rough edges to work out (he's had issues with passed balls) but he's likely an important piece of the team going forward.

Tejada, meanwhile, is younger than d'Arnaud but he's just so limited offensively and the Mets would ideally get more from their shortstop if they're planning to compete. He's had a slight bounce-back from his awful 2013 but he's still not hitting for much average and he'll never provide any power. The hope a couple of years back was that he could hit in the .290-.300 range with a high OBP but his hit tool seems to have deteriorated a bit and his OBP is a bit inflated by intentional walks from hitting in front of the pitcher. He's a capable defender and has played shortstop well but he's not special, either. Shortstop appears to be a prime spot for the team to upgrade this offseason and Tejada probably could stick around as a utility guy or be used in a trade.

2. Third baseman David Wright is having the worst season of his career at the plate (.711 OPS, 104 OPS+), and outfielder Curtis Granderson is hovering around league-average for the second straight year. Are you worried about either of them moving forward as they march deeper into their 30s, or do you think that they can bounce back in 2015?

Mets offense worst in baseball for the past month

Mets offense worst in baseball for the past month

SS: There should definitely be a little worry about both, though I think Granderson's played about as expected this season (he had a really long hot streak leading up to the All-Star break but has been bad for most of the last month or so). With Wright, the Mets are basically banking on him being the focal point of the offense and clearly he's been just ordinary this year. If that's the case going forward, the offense is in huge trouble. He's been dealing with a shoulder issue for a few months now that he doesn't want to use as an excuse but that could certainly be the cause of his huge dip in power. Going forward, I bet Granderson probably is what he is - he'll get really hot and then really cold for a while, adding in some power and playing solid defense in a corner. Wright's future is a little murkier, especially if his drop-off is unrelated to his shoulder. They need him to be the star caliber bat they signed up for.

3. Center fielder Juan Lagares rates as one of the five or so best defenders in all of baseball regardless of position. What should A's fans know about him?

SS: As wonky as defensive metrics can be, Juan Lagares is the real deal out in center field. It seems like every game he makes a play that wows you out there and it's not just because he's super-fast. Don't get me wrong, he's a fine athlete and can certainly run. He gets incredible jumps on the ball, has a quick first step, and runs fantastic routes that allow him to close ground in a hurry. He routinely makes challenging plays in the gaps or deep center field look simple. He also has a very strong and accurate arm that has led to a number of assists at the plate and on the bases and he plays pretty shallow in center and charges the ball aggressively, which helps it play up. He's a lot of fun to watch out there. At the plate, he's not a special hitter but he's a guy who can make contact and hit some doubles. It's his glove that's worth the price of admission. 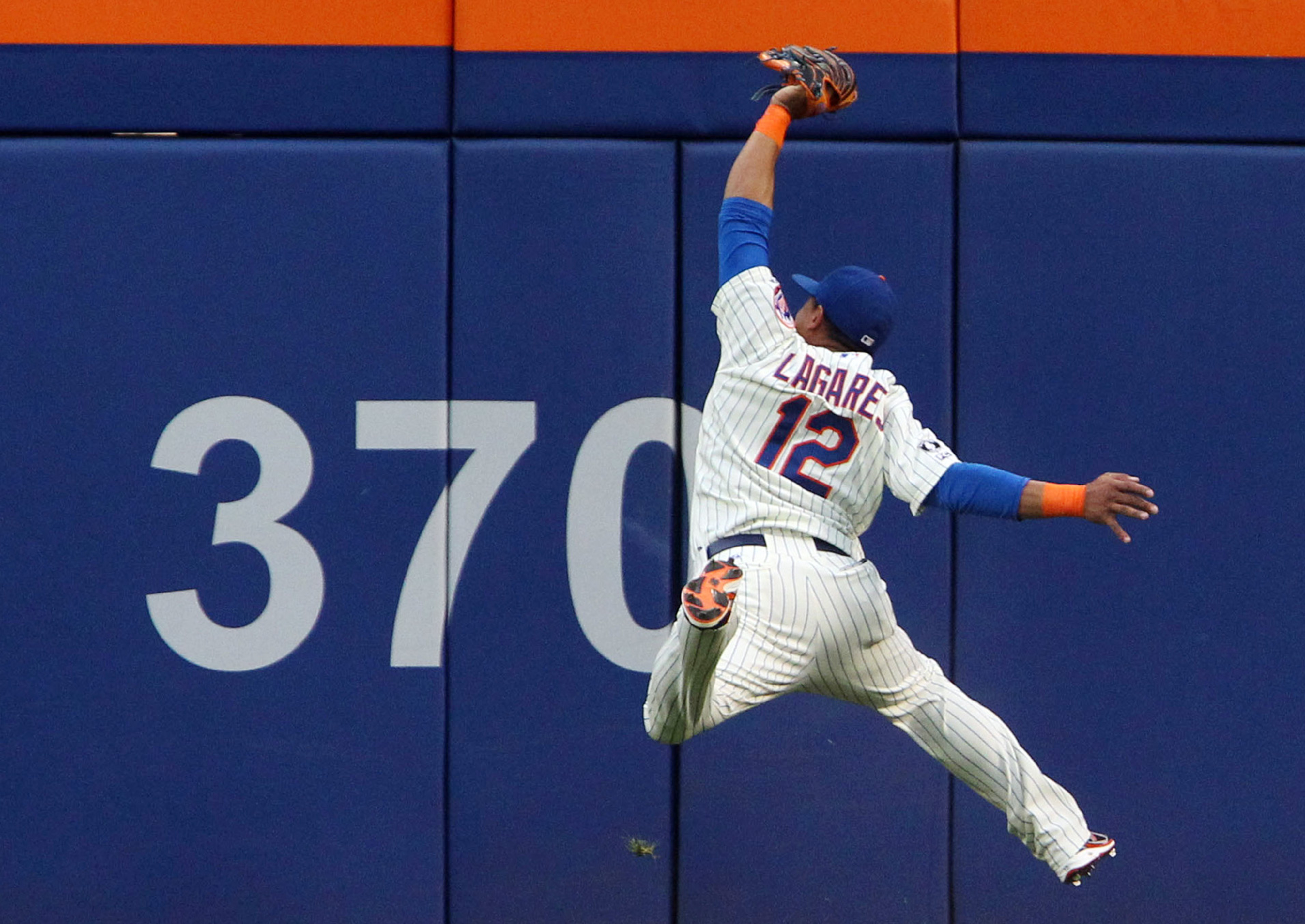 SS: Tough call. Duda is a great name because you can call him "The Dude" and make plenty of Big Lebowski references if you'd like. Nieuwenhuis is really hard to spell and since his first name is Kirk, people call him Captain Kirk. I think the most distinctive names on the roster this year, however, are the three lower case "d" names Travis d'Arnaud, Matt den Dekker, and Jacob deGrom. I believe they're the first team to ever have three lower-case "d's" in one season and because of this, the Mets equipment manager created a set of lower case letters that have been approved by MLB and Majestic to use on uniforms. After d'Arnaud was first promoted last year, they'd used an upside down letter "P" for the first letter since Majestic didn't provide lower case "d's" for uniforms.

5. Dillon Gee (Tue starter) is quietly putting together his fourth straight solid season in New York, but many A's fans probably haven't heard of him. What's the scouting report on the right-hander?

SS: Dillon Gee is sort of your typical soft-tossing righty who relies on his command and off speed stuff to fool hitters. His fastball typically sits around 90 MPH to slightly below that but he's a pretty cerebral guy who knows how to pitch. His changeup and curveball are both solid pitches and when he's going good, he's not walking anybody and will typically throw quick games with low pitch counts. Gee missed some time earlier in the year with a lat injury but has only been so-so in his return. He's not a big strikeout guy but he manages to induce weak outs. At times he can look like a No. 3 starter but he probably settles more into the No. 4/5 range typically.

6. Can you please write us another haiku or limerick about Bartolo Colon?

SS: I'm not sure if I can beat my previous Bartolo limerick so I'll try a haiku this time. Here goes nothing:

Thank you, Steve, for participating in the Q&A!

The series starts tonight. First pitch is scheduled for 7:05 p.m., Kazmir vs. Gee. Former Athletic Anthony Recker is still on the Mets roster, so look out for him; Dana Eveland is also still in their bullpen. However, Chris Young was officially released on Friday, so we don't need to worry about him haunting his old club like he did in June. Coco is in the lineup Tuesday leading off, Callaspo and Sogard are still manning the middle infield, and all three catchers are starting.