Birthday Party at the Coliseum!

With all the gloom and doom on the field lately, allow me to share my kids' first birthday party with you.

Share All sharing options for: Birthday Party at the Coliseum!

Most of you know that last August my wife and I welcomed two new A's fans to our home - Kate and Benjamin (I call him Brooks). Since they were born, I have been looking forward to taking them to their first A's game. The end of last season came and went a little too quickly to get them out, so I had to wait for 2014.

The 2014 season started and I was anxious to get them to a game. But somewhere around June 1st, I realized between my kids constantly trading illnesses, weekday games not a possibility (their bed time is 7:30), and the weekend day games too crowded from Mother's Day, the Yankees and Red Sox, I should just focus on their first birthday, August 2nd.

The baseball gods really were in my favor on this one. August 2nd is a Saturday, 1:05 p.m. start and against the Kansas City Royals. Perfect. So Operation Coliseum Birthday Party was a go. The operation had two phases: secure funds and convince wife.

I called the A's ticket services to get the scoop on suites. I got in touch with Gordon Wilson, Account Executive for the A's. Gordon was great. He explained to me all the options and what the prices are. I hung up the phone without a suite booked, but pretty excited. My excitement only grew when Gordon sent over a view from the suite we had discussed. I was sold.

On to the money. Now, both my wife are both fortunate to be gain-fully employed. But - as I mentioned - we have two youngsters in the house and a mortgage on said house that is quite honestly more than we have business paying. So I was going to have to come up with some extra scratch to make this thing happen. I kinda have three positions: 1) my day job, 2) part-time hitting instructor, and 3) writer on Athletics Nation. I turned down an offer from our editor at AN to become a staff writer (I wanted to keep my amateur status), so no funds help there. My hitting gig is for charity, so no help there either. My only (legal) hope was getting a raise or bonus from my day job. After some lobbying, I was able to completely fool convince my boss that my latest work was worthy of a bonus. Ca-ching! Phase One complete!

Now on to the wife. My wife likes baseball. I say like because it is more of a tolerate. I think she used to like baseball more before I came into her life, but became burnt out after many, many baseball games. But after some gentle reassuring from me, I was able to convince her. "Yes, I am sure the Coliseum is the best place for a birthday party." "I know your family doesn't like baseball, I am OK with that." "They fixed the sewage problem." So on. Once I got a hesitant yes, I called Gordon and booked that baby! Phase Two complete!

I remember when the tickets came in the mail. Better than Christmas morning. Twenty (20!) tickets to Suite 37, four VIP parking passes, and our food package menu. Beautiful, just beautiful. 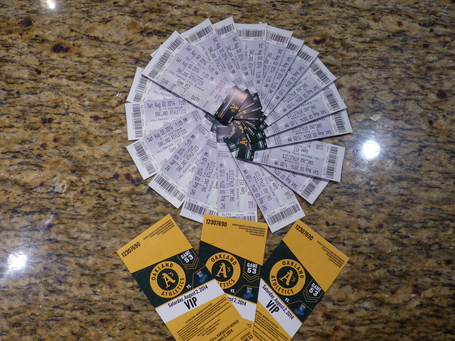 Finally the morning of the birthday arrived. My parents flew in for the occasion from Oklahoma and Texas. Between friends and family, every ticket was taken. We got our kids dressed in their Oakland A's jerseys, and cruised down to the Coliseum. VIP parking is pretty nice. It is the first lot when you come into the Coliseum. So leaving you get a leg up on the rest of the commuters. I was hoping to get to park next to Coco Crisp, but VIP has lots of different meanings.

We made our way into the concrete wonder that is the Coliseum, took the elevator to the third level, and into our Suite. If you haven't seen a game in a suite, I recommend it. Our suite had 20 comfortable stadium seats, two swivel chairs, and a loveseat for sitting. There is a sink and small fridge. A pretty nice flat-screen TV above the loveseat, and two OLD TVs in the corners of the suite (honestly, these should go). Very quickly a very nice attendant Kimm was by to help us with our food and offer her assistance for anything. Oh yeah, and the view from the suite was pretty nice as well. 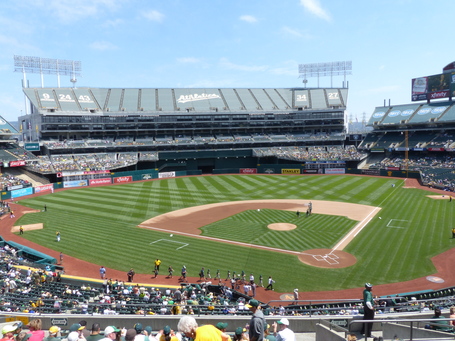 The day was great. Perfect weather for a ballgame. It was awesome singing the National Anthem with my kids. When the first pitch was thrown, it felt great that I had pulled this thing off. But it only got better. Earlier in the week I had arranged a visit by Stomper. It is relatively inexpensive, and definitely worth it. He blasted into our suite around the top of the second inning. Stomper really was great. My son didn't know what to think of him. But my daughter loved him. Stomper took a ton photos, let my daughter sit on his knee, and even signed my son's Stomper bat. Really fun.

The rest of the day was awesome. Gordon came by and introduced himself. He even gave us an A's hat and some vouchers for a future game. (Seriously AN, if you are going to get a suite, talk to Gordon Wilson.) It was Jon Lester's first start in the green and gold. Sam Fuld made a tremendous throw to get a runner at home. The A's scored eight runs in the sixth (the inning my daughter slept through). The game went really fast, and I realized I needed to take my kids around to see the Coliseum. I took each one around and showed them different views of the ballpark, mostly from the bleachers where I usually sit. When Jesse Chavez closed out the game, I was glad the A's had won but definitely sad the game was over.

Good times were had by all. (Especially my son who powered through the whole game without a nap. He loved it.) The Athletics staff was great through the whole process and I couldn't recommend it more. I can't say that this will be a yearly tradition for the Brewer family, but it was something I won't forget. Too bad my kids probably won't remember it. But that is what pictures are for.