With the A's and Braves squaring off for three games, I asked Scott Coleman of Talking Chop a few questions about his favorite team. Here's what he had to say!

The August swoon continued as the Oakland Athletics dropped three of four games to the red-hot Kansas City Royals to start the week. The struggling lineup ran into the worst possible matchup -- a rotation full of strike-throwers who cut through them like a buzzsaw. But hey, at least they roughed up Jeremy Guthrie this time around. Fortunately, the A's now move on to a source of great comfort -- interleague play. Oakland is 10-2 this year against NL opponents, including legitimate contenders from Washington and San Francisco. This time, they visit Atlanta to take on the Braves.

Hammel is coming off two solid outings and will get a chance to play NL ball on Friday. We will also get to see Sonny Gray hit, and he's totally going deep this time. The Braves are 28th in MLB in scoring this year (448 runs), which means they are averaging more than a run per game fewer than Oakland. This is true despite the presence of three of the best hitters in baseball in their lineup -- Freddie Freeman (142 OPS+), Justin Upton (139), and Evan Gattis (130).

Note that we share a connection with the Braves, who also lost two top young starters to Tommy John surgery just as the season was beginning (Kris Medlen, Brandon Beachy). Like with Jarrod Parker, this was the second TJS procedure for each hurler. But also like in Oakland, the Braves plugged in solid replacements (Ervin Santana, Aaron Harang) and kept on trucking without missing a beat. Harang is the only former Athletic on Atlanta's roster, so unless he pinch-hits for some reason we should be safe from the curse. Gerald Laird is a former Oakland farmhand, so we'll have to wait and see if that's enough to qualify for superhuman powers against us; he hasn't homered yet this year, so if he does then we'll have our answer.

1. Last winter, the Braves signed first baseman Freddie Freeman to an eight-year extension worth $135 million. Were you happy with that move at the time? And, now that he's responded with an .868 OPS (142 OPS+), would you say that Atlanta got a good deal?

SC: I liked the deal at the time and still like it. Freeman probably won't ever be a superstar, but he's been incredibly consistent during his first few seasons in the bigs and should keep getting better. Add in the fact that Jason Heyward and Justin Upton are likely bets to leave in free agency after next year, and you can see why it was crucial to keep Freeman around.

2. Dan Uggla is gone, and there was much rejoicing on Talking Chop. Now, the Braves have Tommy La Stella playing second base. Who is La Stella, and what should A's fans know about him?

SC: TLS has been everything Braves fans could have hoped for. He does a great job making contact at the plate and seldom expands his zone. As of a few days ago, he had more walks than strikeouts after three months in the bigs. Think of a poor man's Matt Carpenter.

3. The Braves acquired utilityman Emilio Bonifacio at the deadline. He came in handy right away by stepping in for shortstop Andrelton Simmons, who missed a week with a sprained ankle. Now that Simmons is back, what role will Bonifacio play on the team?

SC: Bonifacio will likely spend some time in center field with B.J. Upton assuming everyone is healthy moving forward. I've always liked Bonifacio, especially as a utility guy. He will also be a late-inning pinch-running option (assuming the Braves can actually get someone on base.)

4. Jason Heyward is a very confusing player. Former No. 1 prospect! But his power has been inconsistent. But he just turned 25! But his batting average is low. But he gets on base and has great plate discipline! Except for 2012, when he struck out 152 times. But he's arguably the best defensive player in baseball, regardless of position! What do you see when you look at Heyward, and how much better can/will he get?

SC: One year, Heyward is going to put all of his five tools together and absolutely explode. He's shown he can do a little bit of everything on the field, but staying consistent (and healthy) has seemingly been an issue every year since he broke out as a rookie. He's a tough guy to figure out, but it's also pretty clear he's one of the top outfielders in the game and will continue to be for quite awhile. It's just a matter of him taking that final step towards being a perennial star.

5. Which burly, slugging catcher do you think could chop down a tree faster: Evan Gattis, or Derek Norris? Also, Baseball-Reference lists Gattis' nickname as "El Oso Blanco" -- does anyone call him that?

SC: Gattis couldn't hit water if he fell off the Golden Gate Bridge -- he's been awful since getting off the DL a week ago -- so I'll take Norris.

El Oso Blanco was a name he picked up in the Venezuelan Winter League a few years ago. Personally, I like #Gattitude, a spinoff of the dumb Nationals' #Natitude. 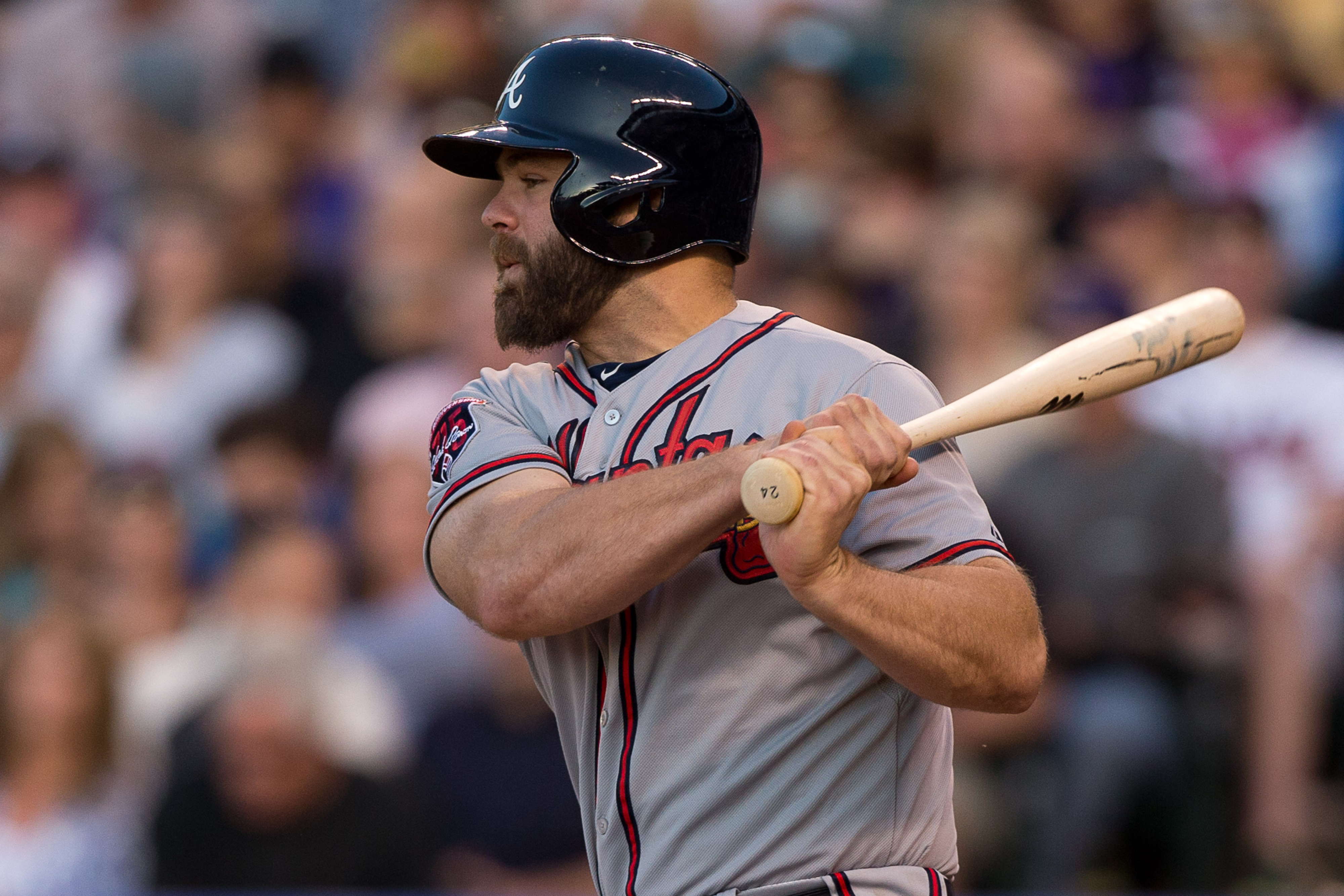 Catcher Evan Gattis is basically a bigger Derek Norris with less beard and without the ability to make contact. -- Photo credit: Justin Edmonds

6. Last winter, the Braves signed right-hander Julio Teheran (Sat starter) to a six-year, $32.5 million contract. How smart does that deal look now that Teheran sports a 3.09 ERA (119 ERA+) with four strikeouts per walk? And what's the scouting report on the 23-year-old, who has never faced Oakland before?

SC: Julio has become one of the better young pitchers in the game and it looks like that contract could be a nice value for the club once he hits his now-bought-out arbitration years. Teheran throws a low-90s fastball with a lot of movement, a big curveball and a changeup that's still improving. He's been one of very few bright spots in Atlanta this year.

7. A's fans also haven't seen lefties Alex Wood (Fri starter) or Mike Minor (Sun starter). Who are these guys, and what's the scouting report on each of them?

SC: Wood has a funky delivery but has been excellent since coming to the big leagues as a 2nd-round college pick, especially when he starts and isn't in the bullpen. He throws hard and really hides the ball well. I wouldn't want to bat left-handed against him. I'd be flinching like Dan Uggla at a curveball.

How good is Alex Wood as a starter?

Mike Minor -- ugh. He was terrific the last few years, but he's an absolute mess right now. Talking Chop did a great breakdown of his season so far. (link below)

8. We all know that closer Craig Kimbrel is arguably the best reliever in the game. Who else should A's fans look out for in Atlanta's bullpen?

SC: Jordan Walden, a guy you're familiar with from his time on the Angels, is basically unhittable when he's not on the disabled list. David Carpenter also throws very hard and has bounced back from a rough start to the year.

But don't worry, Fredi Gonzalez doesn't know how to use his bullpen and will surely screw things up this weekend. He's got it down to a science.

9. The Braves are supposed to be contending, but their record is only one game over .500 and they are three games out of the second Wild Card. What has gone wrong, besides pitcher injuries, and what needs to happen for Atlanta to get back to the postseason this year?

This is the worst Braves offense since 1989

This is the worst Braves offense since 1989

I don't think anyone really knows what's wrong with this team. The offense has sucked all year -- the team still strikes out a ton, but unlike last year, the power just isn't there. The Braves had a formula last season: look awful for a few innings, strike out 10 times through six innings, then hit a 3-run homer, scratch across another run or two and win the game. Not the case in 2014.

While the pitching and defense have been pretty consistent throughout the year, it seems always having 0-2 runs on the scoreboard is starting to take its toll. It also doesn't help that Fredi Gonzalez is absolutely clueless. I might have mentioned this before.

10. Can you please write us either a haiku or a limerick about the Upton brothers, Justin and B.J.?

I hate BJ Upton
He is overpaid
I don't know poetry

The series starts today. First pitch is scheduled for 4:35 p.m., Hammel vs. Wood. The A's are facing a lefty, which means they'll have their right-handed lineup in there. Which means Derek Norris will be starting. Against a pitcher named Wood. You may begin making LumberJack jokes ... now. 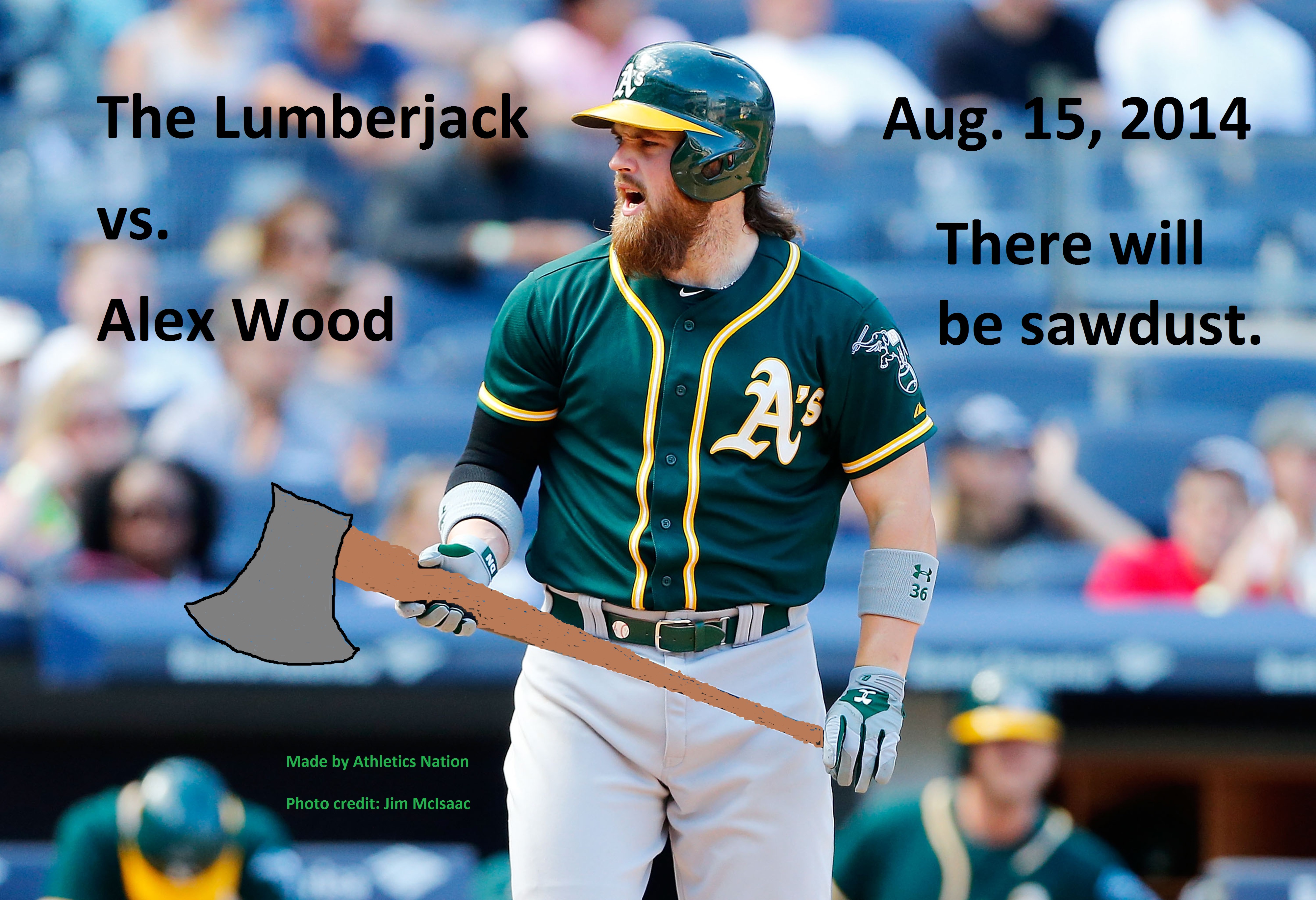