How should the Oakland lineup be constructed? Let's look at who profiles the best where.

Share All sharing options for: Building the Oakland batting order

With the recent trade of Yoenis Cespedes, there has been a lot of talk lately about the lineup. Is lineup protection a real thing? How do you replace a middle-of-the-order bat? How will the lineup look? So on. With these questions in mind, I thought I would spend a couple minutes at looking the Athletics' lineup and how it should be constructed.

Leadoff. Well, that's Coco. In 355 PA in the leadoff spot, Coco has a 120 wRC+ including a 13.8% BB%. Combine that with his base-running and you have a lead-off man. Surprisingly, Craig Gentry hasn't performed well when subbing for Crisp. In 72 PA in the lead-off spot, he has a 65 wRC+ and only a 4.2% BB%. Against RHP, Coco in the lead-off spot is a must. Against LHP, it gets a little murky. Not sure here.

2nd. This has really been a problem for the A's. Check out the production from the two hole. Overall Oakland has a 94 wRC+, good for 22nd in the league.

John Jaso and Jed Lowrie have gotten the most PA, but have been below average in the slot. Not good. According to The Book - Playing the Percentages in Baseball, the 2-hole hitter has the third largest impact of making an out (behind 1st and 4th), so ideally you want a high OBP guy here. Jaso sounds perfect, but he hasn't made it work. Part of the problem is Jaso is striking-out 19.2% of the time in 2-hole. Jaso is also walking at 9% in the 2 hole, way off his career mark. Jed Lowrie is really the perfect fit. But Lowrie has had some troubles lately, so it may be a toss-up between the two. Vogt could get some consideration, but I am not sure he fits the bill either due to his low walk-rate. Since Derek Norris has cut down his strike-outs he is a candidate, but still probably not a perfect fit here against righties. To me this is the most difficult spot to fill in the lineup with the current roster. The second spot of the lineup is very important.

3rd. Josh Donaldson. He struggled in the three-hole last year, but has a 145 wRC+ this year in the slot. Leave him there. Done.

4th. The prototype clean-up hitter is a power guy with a high OBP. That is because on average the clean-up guy sees the most runners on base and outs hurt bad. Solution: Brandon Moss. Perfect fit. 127 wRC+ including .482 SLG and 10% walk-rate batting 4th.

5th. The five-hole is really under-rated. It sees nearly the number of base-runners per at-bat as the clean-up spot, even more than the 3-hole. You want someone who can plate runners and not make outs. Derek Norris. In 145 PA, Norris has a .396 OBP on his way to a 141 wRC+ in the 5-hole. Truthfully, Cespedes was a really poor fit here because of his low OBP. He actually profiled better as a 3-hole hitter.

6th. Cost of making an out is starting to really drop here. So from here on out it isn't quite as important. 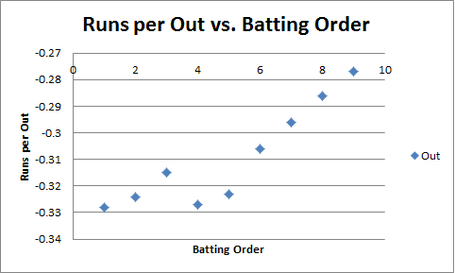 Still, Oakland hasn't got much production at all out of this spot.

Callaspo has provided league average production there, so that's pretty good. Jed Lowrie makes sense but he has really struggled here. Not really sure about this one.The A's are 27th overall in terms of production out of the 6th spot.

7th. In 108 PA in the 7th spot, Josh Reddick has a wRC+ of 138. Leave him there. His OBP doesn't play any higher than maybe 6th. Thanks mostly to Reddick, the A's have gotten the second most production out of this slot.

The real problem seems to be who to put in the second spot, followed by 6th. Too bad we can't steal future Daniel Robertson, because he profiles perfectly at the second slot. Against LHP, Norris fits, but I am not sure against righties. Jaso and Lowrie just haven't gotten it done batting second.

Like making lineups? Check out today's FanDuel competition and make your own fantasy lineup for Wednesday's games. You might win money.