With the A's and Giants squaring off for three games, I asked Grant Brisbee of McCovey Chronicles a few questions about his favorite team. Here's what he had to say!

... But there is still much more season to be played.

These are the scheduled pitching matchups for the series:

The only unfamiliar name on that list is on the A's side. We know Vogelsong, who is back to being a solid pitcher. We know Bumgarner, who is still an ace. We know Cain, who is still pitching like the average-at-best hurler he was last year rather than the FIP-buster he was for eight years before that. And we know Hudson, who is somehow pitching better than ever at age 38 thanks in part to a career-low rate of 1.3 walks per nine innings. However, we'll see newly acquired Jason Hammel for the first time on Wednesday. Hammel's stats entering his start: 17 starts, 2.98 ERA (129 ERA+), 108⅔ innings, 104 strikeouts, 23 walks, 10 homers. He is right-handed, in case you didn't know since you've never seen him.

1. Brandon Belt was hot to start the season, but he missed two months with a thumb injury and just returned on Friday. After what seemed like years of bouncing between the minors and Majors, though, he's finally stuck in San Francisco. Can you give us a scouting report on what kind of player Belt has developed into?

GB: It's hard to say based on the small sample, but apparently he's Dave Kingman with a better glove now? He came up from the minors as a high-average, high-walks prospect who was known for being too passive at times, if anything. This year: lotta dingers, lotta strikeouts, few walks. I'd expect things to balance out a bit.

2. Pablo Sandoval is a free agent at the end of the season, and it sounds like he wants a big contract. Would you re-sign him if you were in charge, and if so for how much? How do you think it'll play out in real life, given the Giants' recent history of retaining the players from their championship teams?

GB: I would re-sign him. He's young for a free agent (27) and the Giants don't have internal options. He reportedly asked for the five years, $90 million that Hunter Pence got, and that's not too crazy, though I think he's played his way out of that total this season.

In real life, he's on the Dodgers next year. I'm expecting nothing less, though there's a chance he's on the Yankees. Start saying it now, so you won't be too broken when it happens.

3. All-Star Hunter Pence has been hitting leadoff recently. How did that come about, and has it produced the desired results?

GB: Gregor Blanco was in a miserable slump, so the Giants looked for the next-best combination of speed/OBP, and it was surprisingly Pence. He's laying off the sliders more, so it's no surprise that he's in the middle of one of the better seasons of his career. 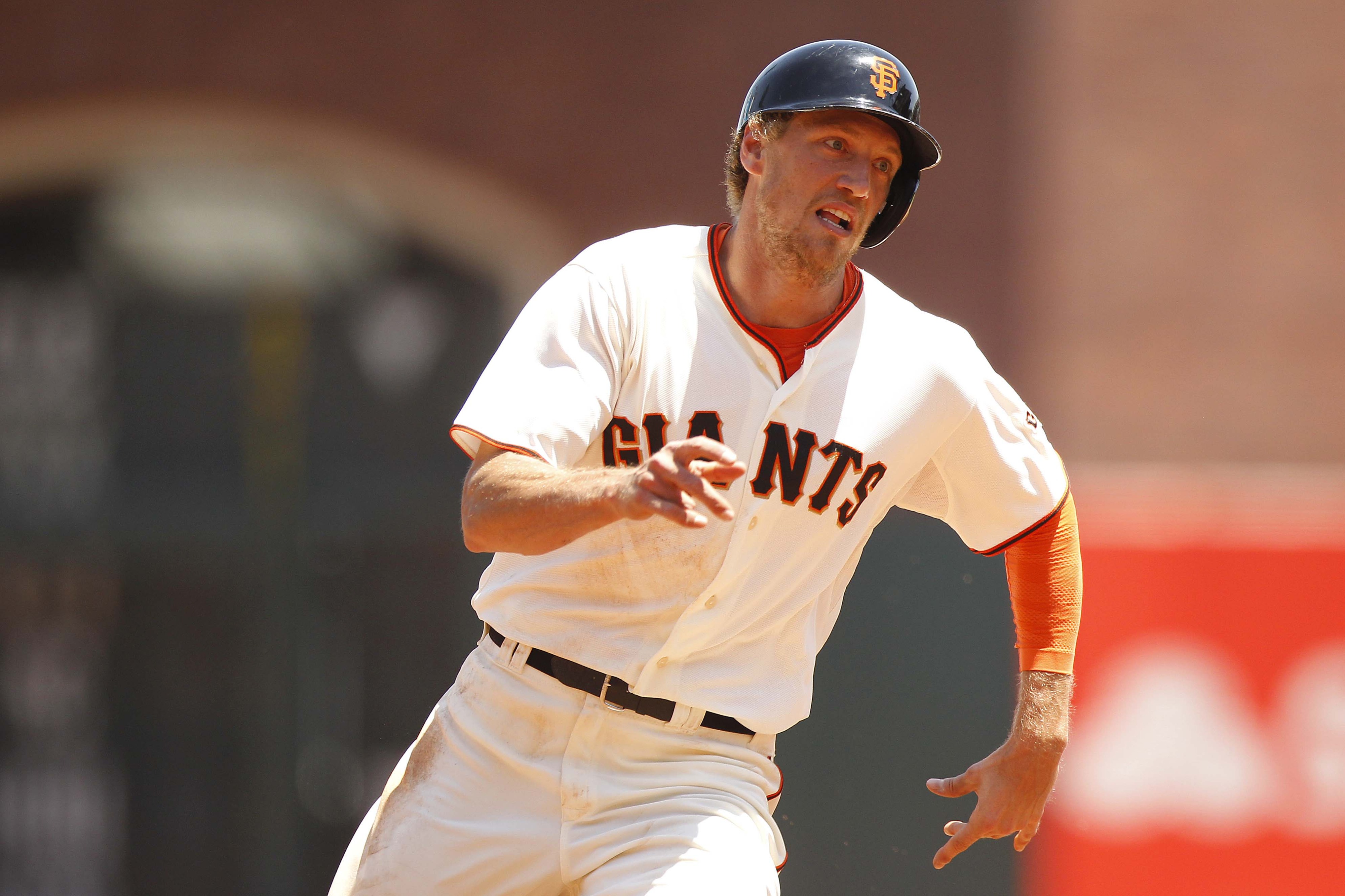 When Pence runs really fast, you can see his synthetic exoskeleton start to peel away from his alien body. -- Photo credit: Cary Edmondson-USA TODAY Sports

4. Former Athletic Marco Scutaro has been out all year with back problems. The Giants replaced him at second base with another former Athletic, Brandon Hicks. How has Hicks performed in emergency duty? Is he still starting, and if not, who is?

GB: Hicks was just grand for about a month, hitting dingers and playing a mean second base. When the power dried up, though, so did the hits, and his slump was bad enough to completely negate the power/defense combo. He's hit .139/.252/.241 since May 3. He's hit into a ton of awful luck, too, but not enough to justify him starting ever again.

5. Tim Hudson (Thu starter) has been the Giants' version of Scott Kazmir, as a veteran free agent signing who is having a fantastic year. What has he done to reduce his walk rate to its current career-low mark (1.3 per 9), and is his success sustainable for the rest of the year? If you could go back, given their nearly identical contracts, would you sign Hudson or Kazmir?

GB: Depends on what you fear the most, I guess: age or recent history. It's hard for me to forget just how quickly Kazmir found himself on the Sugar Land Skeeters. He was so, so broken. I can't get that out of my head, even if it's unfair, so I'll still go with the old guy.

As for what Hudson's doing differently, no idea. When he was really rolling, he said it was nothing more than his established talent plus luck, and I'll agree with him. His command didn't improve; this is just one of the established ends of the spectrum with the command he already had.

6. Tim Lincecum followed up his no-hitter with another eight shutout innings against St. Louis, and he's got five quality starts in his last six outings and almost has his ERA under 4.00. Is he finally bouncing back from his perplexing troubles of the last three years, or is this just a short-term mirage? And if it's real, what has changed?

GB: Lincecum's problem, more than the velocity, was that he didn't know where the ball is going. He has a little better idea right now, and his stuff is a tick better. I don't think that's a coincidence -- there's something mechanical going on, probably.

Of course, he could lose it as quickly as he found it ...

7. Is Sergio Romo's high ERA (4.86) indicative of a poor season or just a couple particularly bad outings ruining his stat line? And can you give us a quick scouting report on relievers Jean Machi and J.C. Gutierrez?

GB: Romo can't get lefties out anymore, and he hangs more sliders in a given inning now than he did from 2010 through 2013. He's a mess right now.

Machi is a big dude with a funky, tumbling split-finger. He throws hard and is also a mess right now. I thought he was going to be the Giants' only All-Star representative for a bit, which would have been hilarious.

Gutierrez throws far harder than the typical NRI, and he has a decent curve. He's a great fourth-rightie to have.

8. The Giants will certainly be buyers at the deadline. What should they go after to help their quest for another title? Do you think they'll make a major move?

GB: They need another starting pitcher, except with the Lincecum renaissance and Ryan Vogelsong pitching better, I'm not sure if they're thinking like that. They'll be poking around Chase Utley (who owns a house in San Francisco), Ben Zobrist, and Daniel Murphy -- basically all of the players the A's will probably be interested in. The problem for the Giants is they don't have a lot of tradeable assets -- they didn't have a player in Baseball America's midseason top-50, for example.

9. To put it lightly, most people on Athletics Nation are not too fond of the Giants. What would you say to them to try to change their minds, to unify the baseball-watching citizens of the Bay Area, to strive for harmony with their fellow humans beyond team allegiance? Or do you think this is how it should be, with a heated geographic rivalry and no double-logo hats split down the middle for fans to wear while they hedge their bets?

GB: I like the A's. I live in Castro Valley now, and it's far cheaper (and less of a hassle) to take my kids to an A's game, so I do it a lot. The idea that I'm supposed to hate the A's is weird.

I get that the Giants are being predictable capitalist swine about the territorial rights, and I get the local media showers more attention on the Giants. But the Southern California teams are so hateable and right there. I'll hate the A's for the next four days, and then I'll root for them for the next four months. I'm trying to win you over with my outstretched arms.

10. Can you please write us a haiku about either Buster Posey or Madison Bumgarner?

Thank you, Grant, for participating in the Q&A!

The series starts right now. First pitch is scheduled for 7:05 p.m., Chavez vs. Vogelsong. Angel Pagan is on the disabled list for the Giants, which I mention now because it didn't come up otherwise. That's why Tyler Colvin and Gregor Blanco are both starting.