A fan's guide to Jeff Samardzija

Spencer Silva gives you the quick & dirty about Jeff Samardzija, the pitcher and the man.

Share All sharing options for: A fan's guide to Jeff Samardzija

Yesterday, our Editor-in-chief and baseball shaman Alex Hall had Al Yellon of Bleed Cubbie Blue give us a brief rundown of what to expect from newly acquired studs Jeff Samardzija and Jason Hammel -- no relation to Mark. It's an excellent read, and I recommend devouring it before or after the article below. Al touched most of the major talking points: Samardzija's two-sport dominance at Notre Dame, his transition from mediocre-yet-high-ceiling bullpen arm to staff ace, the provenance of his beloved nickname "Shark." I'm here to elaborate and essentially provide an all-encompassing (okay, maybe that's ambitious) AN'ers guide on "how to endear yourself to your new badass pitcher." Sound good?

Let's start with his name. For those already having nightmares misspelling his surname on the back of your freshly minted No. 29 shirseys and clever homemade signs, be grateful you don't have to go full Serbian as it's listed on Wikipedia, Džef Samardžija.

The way I remember it is by breaking it down into two parts, "SAMARD" and "ZIJA." Pronounced "suh-mar-juh." The "D-Z-I" combo is for flourish, apparently, as they're all silent.

For Part I, I think of "Samurai" mis-typed.

For Part II, I think of the once ubiquitous adult beverage "Zima," mixed with one of the least onomatopoetic words ever "ouija," pronounced "wee-gee" for some cruel reason.

If my spelling bee tactics are too archaic for you, feel free to fashion your own mnemonic devices. And if I'm being completely honest, it's probably just as fun to misspell his name entirely.

Where do I begin?

Samardzija wasn't good at football, he was really good. 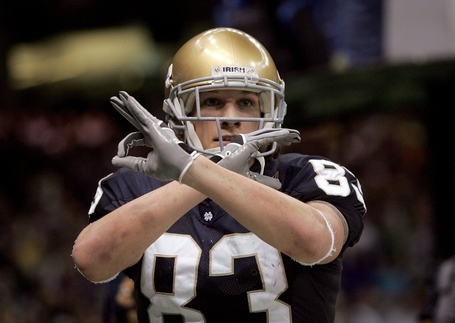 Shark's decision to forgo the NFL in favor of pursuing baseball is earmarked without fail by broadcasters and print journalists alike. What they don't talk about, however, is that he was much better at football than he was at baseball, making the decision all the more puzzling at the time.

In 2005, the year he set Notre Dame's all-time single season touchdown record with 15, he pitched 78⅔ innings of 3.89 ERA baseball with just 56 strikeouts against 30 walks. And the next year, his junior season, he posted a 4.33 ERA with a SO/BB ratio of 61/37 in 97⅔ innings. In football, contrarily, he was finalist for the prestigious Fred Belitnikoff award in both seasons, an award given to the top receiver in the country.

ESPN's NFL draft guru Mel Kiper Jr. wrote a column last summer detailing NFL Draft prospects who could have been greats in that sport as well. Of Samardzija he wrote:

People forget how good he was at Notre Dame. He wasn't just some possession receiver -- he dominated. The guy had 155 catches and 27 touchdowns in a two-year period. He had a 9.1 grade in my guide and could have been the second receiver taken behind Calvin Johnson in the 2007 draft. I had a late first-round grade on him. He could play.

You read that correctly. He was projected to be the second-best wideout in a draft class that featured future Hall-of-Famer Calvin Johnson.

In an interview with Dan Patrick this April, Samardzija spoke of his difficult decision:

I'd actually told Coach (Charlie) Weis and a couple of other guys I'd be playing football. Then I signed in 06' after my junior year, and went out to Boise and Peoria, short-season and Low-A. Going back to Notre Dame, I couldn't stop thinking about baseball. It was really weird. It captured me that summer, when I really saw what baseball was about, traveling, playing everyday. I've always been a happy guy when I go (to) the baseball field. And I always associated going to the football practice field ... I wasn't as happy (laughs). And then I was like, "well this is a pretty simple decision."

The Personality of a Shark

As you'd expect of a former football player, Samardzija has a reputation for being extremely tough and competitive. Last April he famously pitched with a bloody finger after attempting to field a Shin-Soo Choo come-backer with his bare hand.

By all accounts, Samardzija is an affable human. He seems like the kind of guy who wears dude strings on the back of sunglasses and uses phrases like "No Bueno" and "Suavamente, amigo." He was a fan favorite in Chicago, and as Al mentions in his article, he's got a reputation as being an unpretentious, laid back guy.

Not to mention the hair, which scores highly by all metrics -- body, length, sheen ...

I can only imagine the joy Rollie Fingers and the late Catfish Hunter would feel seeing a guy with Samardzija's hair arrangement toe the Coliseum rubber.

Let's hear from the man himself about his pitching.

I don't throw a curveball. I throw a spinning slider. I'm more of a fastball/split kinda guy. I don't mess around with the spinning stuff too much because then I start getting out of my game and that doesn't help.

- Samardzija on his pitches

As noted, Samardzija relies heavily on his fastball/split combination. According to Brooks Baseball, he throws some form of fastball approx 66 percent of the time.

He owns three different versions of the fastball, a two-seamer (sinker), a four-seamer and a cutter. Something unique to Samardzija is the ease which he throws both his sinker and four-seam fastball in the mid-to-upper 90s. He averages 95.4 mph with both pitches. They have great movement and generate a lot of soft contact.

The splitter is his out-pitch. He generates whiffs 46.55 percent of the time batters swing at the pitch. For perspective, Masahiro Tanaka is the only pitcher whom batters make less contact against, and even then just barely (46.92 percent). Samardzija throws it mostly with two strikes.

According to Fangraphs' "pitch value/100," which measures the run value of a given pitch, Samardzija's slider has been his best weapon in 2014. Surprising, considering -- as he mentions above -- it's essentially a spinning change-up. It doesn't have the typical vertical and horizontal movement you associate with a slider, and its success is linked to hitters' need to "gear up" for his absurd fastball.

He's had trouble with the long-ball in the past, giving up more than a home run per nine in each of the last two seasons. He looks like a different pitcher in 2014:

The 2014 version of Samardzija is generating ground balls at a career-high rate, limiting walks, and striking out nearly a batter per inning. In the home run wasteland that is the O.co Coliseum I expect him to attack hitters with tenacity (According to Fangraphs Park Factor data, Wrigley gives up 10 percent more home runs on average).

It sounds like he's as excited to be here as we are to have him. In his introductory press conference Saturday afternoon, asked about leaving Chicago, he said:

"I don't enjoy rebuilding. I want to win. I don't care about anything else but winning. I'm excited to be here."

We're excited to have you here, Jeff!

(read the full transcript of the press conference here)