The Oakland Athletics (53-33) will try to make it three in a row against the visiting Toronto Blue Jays (47-41) in the third game of this four-game set. A pair of lefties takes the hill today, Scott Kazmir for Oakland and Mark Buehrle for Toronto.

Buehrle (10-5, 2.50, 67 K, 17 starts) is coming off an eight-inning two-run effort against the Chicago White Sox on June 29, ultimately taking the loss in the middle of Toronto's June swoon. Coco Crisp, leading off tonight, has been generally successful against Buehrle: 16-for-55 (.291) with three strikeouts, eight walks, and three home runs.

Kazmir (9-3, 2.61, 91 K, 17 starts) only managed 5⅓ innings in a one-run effort on June 30 against the Detroit Tigers at Comerica Park, where he earned no decision. In his start against Toronto at Rogers Centre on May 23, Kazmir went seven innings and conceded three runs. The Blue Jays roster collectively has only about 100 plate appearances against Kazmir. The most experienced is Melky Cabrera, who is 9-for-25 (.360) with five strikeouts, no walks, and one home run. He bats second tonight playing left field.

Brandon Moss will not be available tonight after injuring his left ankle Friday, and remains day-to-day. Stephen Vogt will take his duties in right field while Nate Freiman bats against the left-handed Buerhle. Yoenis Cespedes is your designated hitter today and Craig Gentry plays in left field.

On the bench are left-handed hitters Eric Sogard and John Jaso, and switch-hitting Nick Punto.

Every reliever except Jim Johnson pitched in yesterday's 12-inning affair. With Tommy Milone optioned to Sacramento today to make room for Jeff Samardzija, Brad Mills is listed as an eighth reliever for this evening's game. The Blue Jays have received some remarkably deep starts over the last week, with no starting pitcher throwing under six innings, and five starts of at least seven innings pitched. 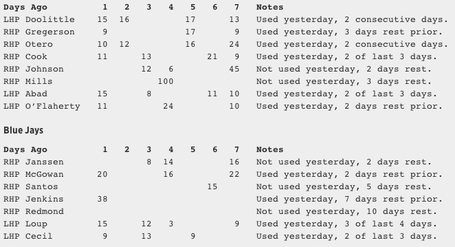