Goodbye, Yo, and Thanks For All The Memories

Breaking news in Oakland as Yoenis Cespedes has been traded away and the A's and the fans try to find a way to say goodbye to the glitz and glamor of this larger-than-life player.

Share All sharing options for: Goodbye, Yo, and Thanks For All The Memories

At least, this time, they didn't trade Cespedes while he was in the on deck circle.
by drink409

It's funny, you know. Two weeks ago, I wrote a tribute to Jose Canseco, as I welcomed him back to the Coliseum. In the article, I tried to explain my feelings about his trade. Granted, I was 15, and had very limited life experience, but it felt for all the world like baseball as I knew it was coming to an end. It was a loss; blah blah sports-not-real-life-cakes, but it was a loss as real and as gut-wrenching as it could have been back then, and I took it hard. Of course, I have loved the A's every day since; the Canseco trade devastated me, but I found myself loving the A's as a team, which made absorbing any subsequent losses that much easier. Sum of the parts, you know.

Of course, I did learn a lesson as a young fan of fifteen. Don't ever get attached to that one special player. You can love every man on your team; you can root for them all to succeed, but no one--absolutely no one--is untouchable. A lot of players followed Canseco into the MLB wilderness, leaving the comfy if not ragtag confines of the Coliseum; Giambi, Tejada, Hudson, Mulder, Chavez, Gio, Ethier, Russell to name a few, and it was always sad, but okay. Billy Beane has turned our few commodities into many more puzzle pieces, and he has kept a team with zero payroll competitive for the better part of the last fifteen years, doing it all with no money, no stadium, no flashy draws, while competing on a level playing field against teams who have everything. And we love him for it. Because he alone can do what we can't--and it's impressive, since he knows the players personally and we don't--separate the emotional baggage from the cold, hard statistics.

I like to think that my emotional well-being has matured in the last twenty-two years, since I was gutted by the Canseco trade, but I'm here to tell you that I woke up this morning with feelings that weren't too far off that day so many years ago.

You know why? Because we finally had something that people wanted. We've always had the pitching, and although it's arguably more important that the hitting, especially in the postseason, no one talks over the water cooler about the sexy ERA of your favorite team. No one says, "Did you SEE that the A's pitchers all pitched this week and each only gave up an earned run in all the starts?". No. You say, "OMGWTFPOLARBEAR did you SEE that Cespedes throw? That Cespedes home run? That Cespdes stolen base?" Players like Cespedes, complete with all their glitter, bring the sexy. 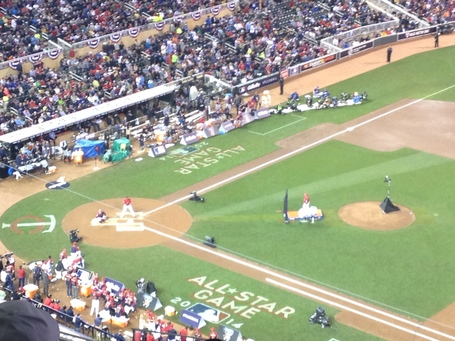 And in what will now be my favorite all-time memory of Yoenis Cespedes, I had the distinct privilege of attending the All Star festivities in Minnesota this year. I went from biting my nails nervously as we put our player to the home run test last year, as he outshined even our highest-of-high expectations, to an unfamiliar smug confidence as he played his way into the second round of the Derby, unfazed by even Giancarlo Stanton and his monster home run. We turned to everyone around us with a "That's our boy, the back-to-back Derby winner!" long before he ever hit the game winner. Or even went to the finals. We just knew. Because Yoenis Cespedes was the superstar that we all wanted, that we all needed, that brought national attention to lowly Oakland; that gave the A's legitimacy and swagger; a callback to those 70's and 80's A's, you know, the ones with the rings.

And I will always, always love him for that. I will miss the electric throws, the monster home runs, and just the way he made me feel as an A's fan rooting for him. Especially when he delivered. At the Home Run Derby.

But I haven't been an A's fan for more than 30 years, and especially not the 17 of those in which Billy Beane has been the General Manager, for nothing. Whether we agree or not with the standard, Major League Baseball has told us that the only way the A's are accepted into the Great Teams Club and the history books, is for them to win a World Series and get a ring. It doesn't matter that they've been the best team in baseball for a good portion of the early 2000's and most of the 2010's. It doesn't matter that they just keep winning as Beane just keeps pulling the right strings. If Beane thought our team this morning was good enough to win the World Series, Cespedes would be an A's player for another sixteen months. But he's not. And we weren't. And now, we cash in everything we have; our best prospect, our most well-known player (again, not the same as being our best), and we go for it all.

The 2014 Oakland Athletics, trying to win the 2014 World Series by any means necessary. It's not a La Potencia slogan for sure. But maybe, just maybe, it could be more.

I'm wishing the best of luck to Yoenis Cespedes in his career! Thank you for your years in Oakland, and we'll miss you, especially as you three-peat the Home Run Derby next year!