With the A's and Blue Jays squaring off for four games, I asked Tom Dakers of Bluebird Banter a few questions about his favorite team. Here's what he had to say!

The Oakland Athletics swept the Miami Marlins and then took three days off, or at least that's how I'm choosing to remember it. They finally return home after their final three-city road trip of the season, and how sweet that must be. They still have the best record in the Majors (51-33), and it never, ever gets old starting a column with those words. Only 11 more games until the All-Star break, and only 28 days until the trading deadline. Oh, and Eric O'Flaherty has finally joined the team, at the expense of Jeff Francis.

Dickey and Buehrle you know. Stroman and Hutchison are covered in the Q&A. Gray will look to bounce back from a rough outing in Miami, while Milone will hope to continue his resurgent season. Kazmir is apparently OK after leaving his last start due to a muscle cramp, so keep your fingers crossed that nobody is hiding anything. Mills is still on the team, which is just amazing and fantastic. Three lefties means that we'll see very little of Adam Lind and his .931 OPS this weekend, which is totally fine with me. But beware of former Athletic Steve Tolleson, apparently.

1. Third baseman Brett Lawrie is on the disabled list. (My guess: He pulled a hammy chasing after a butterfly.) What's wrong with him, and who is taking his place at the hot corner every day?

Oakland A's questions for Alex Hall of AN

Oakland A's questions for Alex Hall of AN

TD: I would have guessed Red Bull overdose ... but no. He was hit by pitch three times in a week, twice off the left hand, causing him to miss a couple of games, but the third time, broke a finger. He'll be out for at least a month.

2. It appears that full-time second base duties have been handed over to Munenori Kawasaki. Who is he, is he any good, and what else do we need to know about him? Is he an upgrade over last year's keystone flops?

TD: Well, Munenori was one of last year's ‘flops'. Muni is fun. He is a great reminder that baseball is meant to be entertainment. He dances, he runs on the spot to try to fake out catchers, he bows to his teammates and to the fans. And, if you didn't know, he is Japanesseeeeee:

As a player ... he works the count. He sees a ton of pitches. He has a .333 OBP, which isn't bad for a guy who rarely hits the ball out of the infield. I'd rather have a, you know, good second baseman, but, if I have to have a replacement-level player, I'm happy to have one who is fun to watch and seems to be very popular with his teammates.

3. Outfielder Anthony Gose was acquired by the Blue Jays (from the Astros) in 2010 in exchange for Brett Wallace. As I remember, at the time he was considered a toolsy prospect who needed a lot of development. Now that he's getting playing time, would you say he's panned out into a success? Or does he still have a ways to go to being a quality Major Leaguer?

TD: He has a ways to go yet. He's great defensively. He can go from the plate-to-third on a triple as fast as anyone. It is fun to watch him put down a bunt single. But, he strikes out way too much. He doesn't seem to be able to recognize a breaking pitch. As a fourth outfielder/pinch runner/defensive replacement, he's great. And his defense in center field would likely be good enough to carry his bat, if you had a good offensive team around him, but, all-in-all, I'd rather have Colby Rasmus.

Is Jeff Francoeur headed to the Blue Jays?

Is Jeff Francoeur headed to the Blue Jays?

4. What's the catching situation in Toronto?

TD: At the moment, mostly is it Dioner Navarro. He's, you know, OK. Compared to J.P. Arencibia, he's Johnny Bench. But comparing him to real major leaguers, he's OK. He's got a decent, if empty, batting average. He doesn't walk enough or hit with enough power to be a very good hitter. He doesn't have a great arm and he isn't very athletic behind the plate, but his pitchers seem to like pitching to him. Since last year's catcher had no real redeeming qualities, Navarro looks pretty good.

When R.A. Dickey pitches, we have Josh Thole catching. Thole can catch a knuckleball without looking too terrible, which is why he draws a major league paycheck.

5. Marcus Stroman (Fri starter) began the year as the No. 55 prospect in baseball according to Baseball America and MLB.com, and No. 27 via Baseball Prospectus. Can you please give us a scouting report on the 23-year-old right-hander?

Melky Cabrera Is Who We Thought He Was

Melky Cabrera Is Who We Thought He Was

TD: Marcus has been excellent. He throws a mid-90s fastball that he commands well and he has swing and miss breaking pitches. He's made six starts; five of them were quality starts, and the other was in Yankees Stadium and he got the Yankees' home strike zone, roughly the size of a postage stamp.

There isn't much not to like. He's throwing strikes, he hasn't walked more than three in a start yet. He's got a 4-to-1 strikeout-to-walk ratio. The worry is that he isn't a big guy, 5'9, he has to work to get the nice downhill plane you'd like, but he seems to take the concerns about his size and use them as a motivator.

6. Drew Hutchison (Sun starter), also a 23-year-old righty, is finally healthy. In our last Q&A, you predicted that he would be the ace of the staff by the end of the season. Is he living up to that praise? What's the scouting report on him?

TD: He's been inconsistent. It shouldn't be a surprise, he's just 23 and he's just back from missing a year after Tommy John surgery. Sometimes he'll lose his delivery for an inning or two at a time. I think that it is just a matter of getting enough innings that everything becomes natural again. When things are good, he's pounding the lower part of the strike zone with a low-90s fastball and can get guys to chase the slider when he's ahead. When he rushes things, he'll start to miss high. 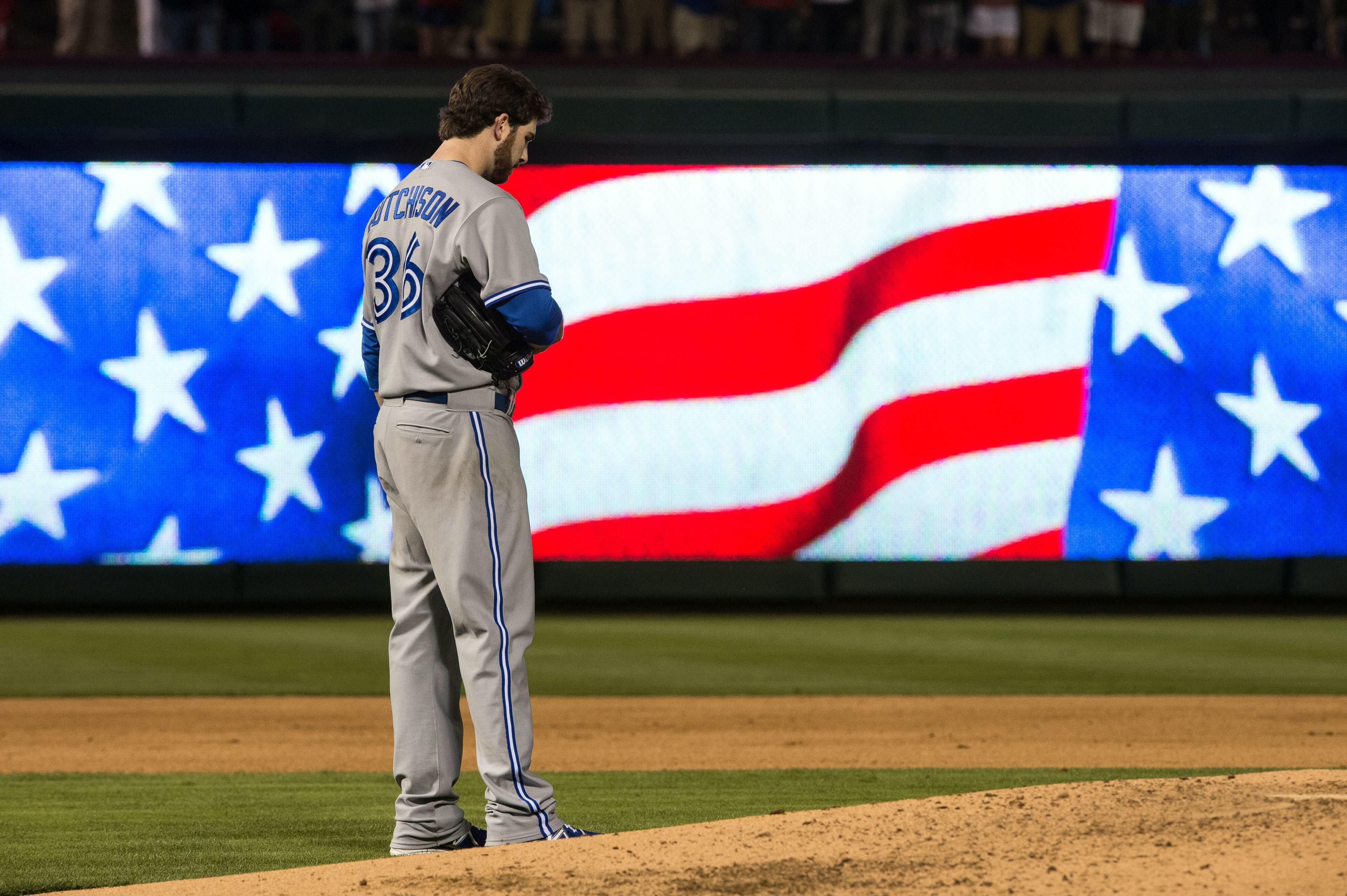 The A's have the pleasure of hosting the only non-USA team on July 4. -- Photo credit: Jerome Miron-USA TODAY Sports

7. Honest opinion: Do you think the Jays will continue their success and win the East for the first time since 1993? Or are you worried that they'll fade? Who do you see as the biggest competition in the division?

TD: Honestly, it likely depends on health. We've had a few injuries, Jose Reyes, Adam Lind, Brandon Morrow, Colby Rasmus, Brett Lawrie, and we can ride them out, but if they start piling up, there isn't a whole lot of depth. We really need to keep Jose Bautista and Edwin Encarancion healthy; those two can carry the team and cover for problems at other positions. Without them the weaknesses of the lineup would be exposed.

I would like the team to pick up a decent second basemen and another starting pitcher before the trade deadline, but I've been saying that since the end of last season, it hasn't happened, and we are in first place. If the stars keep playing like stars, we can live with Kawasaki at second.

The biggest competition is the Orioles. The Yankees are aging and have fallen back some in the past couple of weeks. I don't think they are built for the long season. The Rays and Red Sox have dug themselves quite a hole, and I think they are both better than they have played but they would have to go on a pretty good run just to get back to .500. The O's are keeping close and some of their best players haven't been playing like their best players yet. If Chris Davis and Manny Machado start hitting, they could find another gear.

8. Last time, you gave us a haiku about Edwin Encarnacion. This time, can we have a haiku or a limerick about Jose Bautista, the top All-Star voter-getter in the Majors?

Thank you, Tom, for participating in the Q&A!

The series starts this evening. First pitch is scheduled for 6:05 p.m., Gray vs. Dickey. The knuckleballer dominated the A's when they visited Toronto in May, so let's hope that doesn't happen again. Donaldson is out of the lineup, Jaso is leading off, and Freiman is starting against the platoon at first. On the bright side, Edwin Encarnacion is starting in left field, which should be an absolute joy to watch. The artist formerly known as E5 can reinvent himself as E7. Shades of Jack Cust, we can only hope.