Did the Athletics make a mistake by acquiring Jim Johnson?

There were several closers available last winter. Did the Athletics make the wrong choice?

Share All sharing options for: Did the Athletics make a mistake by acquiring Jim Johnson?

The role of Oakland Athletics closer is not one that brings with it a lot of job security. Billy Beane has shown an aversion to expensive, long-term closers, for a whole host of reasons that make sense: a reliever's performance can fluctuate wildly from year to year, the myth of the "proven closer" is likely overblown since great set-up men become good closers every year, saves are worth far more on the open market than they are in real life, and so on. What it comes down to is that Beane has consistently found closers who have become adequate performers (and often All-Stars) at relatively bargain prices in terms of both salary and acquisition cost.

That's why Jim Johnson never made much sense. He was the most established closer Beane has ever acquired, and he came at a premium price that showed how broken the arbitration process is for that particular position; his final year of arbitration earned him more than any other closer got on the open market last winter, which is decidedly not how the system is supposed to work. But how out of place was he in Beane's history? Here is a quick run-down of his predecessors:

It's hard to imagine that any other general manager has this kind of success rate with closers. I've identified 11 pitchers who have firmly held that role over 16 years, and seven of them were either All-Stars with Oakland or received MVP votes in at least one season here. Of the others, Taylor was pretty good and Dotel was not terrible. Rhodes and Johnson are the only abject failures in Beane's entire tenure. And, since '98, the A's rank 10th in MLB in saves and only 20th in blown saves, so it appears that the group overall has been successful (though that also counts blown saves by set-up men, so take it with a grain of salt). Sure, there were other guys who closed games in this time; Alan Embree filled in for an injured Street in 2007, and Brad Ziegler did the same in 2008. Brian Fuentes got a shot in 2012, but he was originally signed as a set-up man and didn't hold the closer job for very long. Ryan Cook got a shot, but not for long. The guys in the above table were either acquired specifically to be the closer, or grew into the position and held it for multiple seasons.

And what an interesting list it is. The first thing I notice is that Beane has not actually relied on cheap pitchers to fill this role. Sure, he got seven seasons of ninth innings from a pair of draft picks, Street and Bailey, who spent most of that time on the Major League minimum salary. But when Beane goes out and gets a guy -- Koch, Foulke, Rhodes, etc. -- he pays a hefty amount. He doesn't usually pay the market rate for a closer, but he'll pay the market rate for a premium set-up man, which is still a lot different than just plugging in a guy from the minors. So, while Johnson's salary is quite a bit more than the next-highest A's closer (Foulke, $6 million), it's not as above-and-beyond Beane's history as everyone liked to suggest during the winter. We were just all used to years of super-cheap Street and Bailey.

It also wasn't the first time that Beane got a guy who was already a proven closer. Sure, he's experimented with set-up men like Rhodes and Balfour, with different degrees of success. But Koch was already a big name when he came here, as was Foulke. Dotel had already started closing for Houston before he came to town. And Street was a championship closer in college who was drafted specifically to play that role in the pros. It's not unheard of for Beane to get an established ninth-inning guy, but again, we were all used to developing our own thanks to back-to-back success stories Bailey and Balfour.

Of course, I'm not trying to suggest that Johnson wasn't a reach. The acquisition cost was virtually nil, but everyone knew the $10 million salary was bonkers from Day 1. We all knew he was a bit overrated due to inflated save totals and a less-than-dominant skill set. And it was apparent that there were several other good internal options, making his addition more of a luxury than a necessity. But he is not the aberration in Beane's history that he is often portrayed to be.

Given that picking up a pricey, experienced closer isn't actually out of the ordinary for Beane, who else was available last winter? Here are the guys who were signed as closers, including Johnson even though he was technically a trade acquisition:

And how have they fared? The Tigers have already acquired Nathan's replacement due to his 5.73 ERA, and it's just a matter of days now until he loses his job; he's also 39 years old, so he was risky from the start. Balfour already lost his job; he has a 5.40 ERA and is walking nearly a batter per inning. Axford lost his job almost immediately.

There were better options available, but they weren't the ones that anyone was thinking of at the time. Few wanted to touch Rodney on a multi-year deal in his late 30s. I doubt anyone was seriously lobbying for the aged Hawkins. And if K-Rod is ever on my team I might have to re-consider my fandom because seriously, screw that guy.

No, the conversation at the time was mostly between keeping Balfour or going with an internal option. Nathan was always out of Oakland's price range, and thank goodness for that since it's starting to look like his career is over. I never saw a rumor that had Rodney connected to the A's, so I don't know if it's fair to say that Beane passed on him. And while Balfour's deal was for a lower annual value, it's sure looking like the Rays blew $12 million on a failed closer while the A's only dropped $10 million.

Obviously, picking up Johnson didn't work. He fell about as hard as a baseball player can fall, from two straight All-Star appearances to being DFA'd the next year due to an inability to record even one out at a time. But in baseball, as in life, you must judge decisions based on the information you had at the time, not on the hindsight you draw from seeing the results. At the time, there were many flawed options and Beane went with the younger one who had a track record and would come on a one-year deal. It didn't work out for the A's, but, as we now know, almost no realistic course of action was going to work as far as bringing in a new stopper from outside the organization. Last winter's class was just mostly a dud.

It was an odd decision at the time, to be sure. Not unprecedented, but odd. And while I don't think anyone was ever 100 percent sold on the idea of Johnson The Expensive Closer, it was a totally reasonable course of action given what we knew six months ago. Even if he lost the ninth inning duties, he still should have lined up as a solid set-up man. Acquiring him despite the bloated salary was a good move, though not a brilliant one, and I stick to that opinion just like I did six months ago. The salary sort of made him an undervalued commodity in a weird way, since any team willing to spend a little bit too much would still get a good player and there are a limited number of those to go around. Sometimes, things just don't work out. The best laid plans, and all that.

Fortunately, it all turned out well. Johnson didn't cost the A's too many games, and the timing of his fall from grace allowed Sean Doolittle to emerge as perhaps the best closer in the league. As usual, even when Beane made a mistake (as with Rhodes, as with Dotel), he didn't let it fester and hurt the team long-term. He made a quick move to fix the error, and that's where his genius truly lies. Nobody hits on every single pick, but the smart ones admit their mistakes and move on so quickly from the misses that it's hard to remember they even happened.

I wanted Jim Johnson to work out. On a personal level, he seems like a perfectly fine human and it's a bummer to see things go so wrong for him. But sometimes things just don't go your way, and he'll have to fight his way back to the top of the mountain. Don't worry, though. Relievers are volatile, and for all we know Johnson will be an All-Star again next year. It'll just have to be with another club. 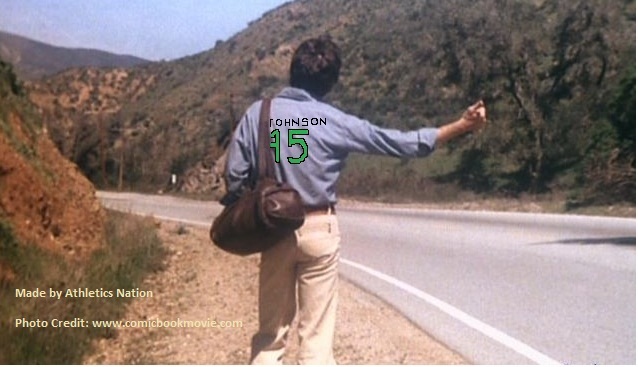 The deposed closer wanders off into the sunset, looking for the next chapter in his career.