With the A's and Astros squaring off for three games, I asked Ryan Dunsmore of The Crawfish Boxes a few questions about his favorite team. Here's what he had to say!

Thus begins the soft part of the Oakland Athletics' 2014 schedule. With the series against the Orioles in the books, we can now look forward to a lot of Astros and Rangers, two of the four worst teams in baseball right now, over the next week and a half. After that, it's a lot of fading Royals, last-place Rays, and last-place Twins to take us through the middle of August. The A's passed their final test against a fellow contender by taking two of three from Baltimore, so now it's time to pad the record with an Angels-like hot streak against the bottom-dwellers. Oakland's record entering the series: 61-37, two games over the Angels, five games over next-best Detroit (Washington is tops in the NL at 54-43, only two games better than the Mariners).

The A's have faced Oberholtzer twice this year. Once he was decent, and once he got crushed. They've seen Peacock twice, and he was shaky-but-not-terrible both times despite nine total walks combined in 10 innings. All four of those games resulted in A's victories. They haven't seen Feldman since late 2013, when he was an Oriole, and he held them to one run in five innings despite four walks and a HBP; Baltimore won in a blowout. The A's will respond to those three hurlers with a pair of freshly minted All-Stars and possibly the best fifth starter in the league. Houston's offense is second in MLB in striking out (just three whiffs behind Miami), so Oakland's staff should have some fun with that.

An extra thank you to Ryan this time around. I usually send these out a couple days ahead of time, but this time I didn't get to it until Tuesday morning and Ryan stepped up to send me something on short notice. Thanks buddy!!

1. First baseman Jon Singleton graduated to the Majors since we last saw the Astros. He's showing his power with six home runs in 41 games, but he's only hitting .182 and he's striking out an absolute ton. What have been your first impressions of the 22-year-old so far, and what are your expectations of him? Have they changed at all, for better or for worse, since April?

RD: Singleton has shown flashes of what made him the top first base prospect coming to this season -- quick hands and a power bat. My expectation for him is to learn how to be a major leaguer this year; at each level he has show he can bounce back after struggling. The only thing that has bothered me thus far is his fielding, a few too many routine grounders have slipped by him in his short time in the bigs. One thing can be said -- his bat flip is major league ready.

2. Outfielder Robbie Grossman is back in the bigs, and he's as perplexing as ever. He's got good plate discipline and a bit of pop, but his average is below the Mendoza line. Is he due to get hot again like he did in the second half last year? Will he ever hit consistently enough to be a productive Major Leaguer?

RD: I believe in Bob Grossman, but I'm one of only a few left. In reality his ceiling is a fourth outfielder. He has a hit in seven of his last nine starts, and that's as hot of a hot streak as you can expect from Grossman.

RD: You speak of Obi Wan, sometimes called Oberhockey. I think this is the real Oberholtzer -- his 2013 and 2014 xFIP (4.27, 4.24) are almost the same. His best pitch is his changeup and he hasn't thrown it consistently well enough to be an everyday starter. Obe's walks have been a concern this season, and his walks-per-nine-innings has increased to 2.19 -- 60 points higher than last season. 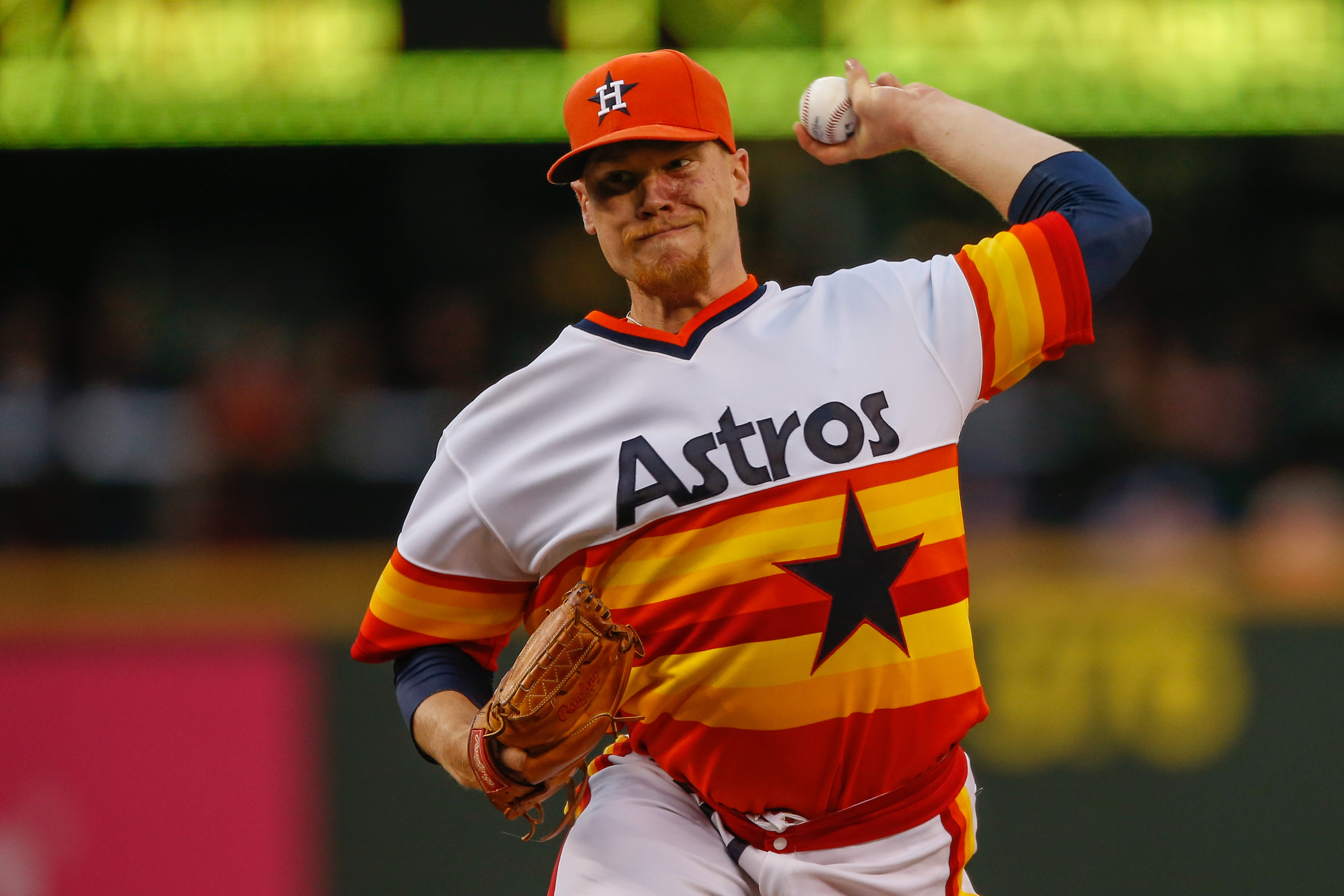 4. Brad Peacock (Wed starter) has a 4.00 ERA in 14 starts after a poor stint as a multi-inning reliever to start the year. What does he need to do to take the next step in his development, or do you think this is as good as he'll get?

RD: Peacock is a bulldog -- that's sentence I never thought I would ever use in my life. The key to his success is locating the fastball, and he hasn't shown he can do it for an entire season. Obie and Peacock feel more like placeholders until future prospect arrive.

5. Scott Feldman (Thu starter) has settled in nicely, with a 4.30 ERA (94 ERA+) in 17 starts. Has he been a worthwhile investment for this young pitching staff, providing league-average innings and maybe some veteran leadership? Or would you rather have had an extra rotation spot to take another flyer on a lottery ticket and some extra money to throw at other positions?

RD: The Astros have already hit big with one lottery ticket in Collin McHugh, it would be nice to see if they play their luck again. But, Feldman as you said brings a veteran leadership and stability the Astros have been looking for. Last season, Houston couldn't go five straight starts without having to heavily tax the bullpen. With Feldman, Houston at least knows they have one starter who can go six or seven.

6. The national media is ripping apart the Astros for their recent episode with Brady Aiken, the No. 1 overall pick who failed to come to terms with Houston after his physical showed concerns with his UCL and team lowered its offer. What's your side of the story, and is it more sympathetic toward the Astros?

RD: Putting it simply, Houston's team doctor found a smaller-than-average UCL in Brady Aiken's elbow. It's working perfectly fine at the moment, but the Astros felt they needed to lessen the risk by offering a lower number and signing two more high school pitchers. It appears Aiken's camp didn't even attempt to negotiate on the final day, which tells me the relationship was ruined well beforehand. If that's the case, I put the fault on the Astros not for lowering the offer but the way they handled it.

7. Can you please write us either a haiku or a limerick about George Springer, who already has 20 home runs in his rookie year?

That was bad, but so are the Astros.

Thank you, Ryan, for participating in the Q&A!

The series starts tonight. First pitch is scheduled for 7:05 p.m., Kazmir vs. Oberhockey. We will see Trogdor (Chris Carter), with his 19 homers and 104 OPS+ joining in a weird juxtaposition. We will not see Springer, who is out on Tuesday with some leg problems. We will see Jason Castro, the guy we're all glad we didn't trade the farm for. And there will be Hoes all up in left field.