Attendance thresholds for Major League Baseball teams come in the millions. Four million bodies passing through turnstiles in a season is almost unheard of. Three million is elite. Two million is the threshold for decency, and if your team is failing to draw one million, your market might not be able to support a big-league team.

Oakland hasn't drawn two million fans in a season since 2005, the most recent year the upper deck was tarp-free. The Athletics' one playoff appearance between 2004 and 2011 didn't help draw crowds, and neither did an ownership that quickly abandoned plans to build a new ballpark in Oakland, having quickly moved on to supposedly greener pastures in Fremont, then in San Jose.

Turnstile counts hit their low points in 2009, when the A's drew just 17,392 fans per game. It improved marginally the next year, with average crowds of 17,511, and again the year after, when that figure reached 18,232. Check out this cool infographic that the San Francisco Business Times did: 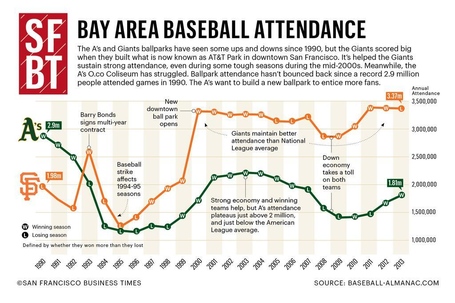 Attendance jumped again following 2012's out-of-nowhere playoff appearance, reaching 22,337, putting the A's at 23rd across baseball. This year, coming off two straight playoff appearances and having charged out to a league-best 61-37 record, Oakland is averaging 24,584 per game.

Oakland has played 47 home dates (48 home games, but crowds for two were lumped into a single-admission doubleheader), meaning that to reach the two million mark this season, crowds for the remaining 33 games would have to reach 25,591. That could be tough, given that marquee opponents like Boston, San Francisco, and the Yankees have already passed through the Coliseum.

That said, there are several remaining dates on the schedule that are all but guaranteed to sell out, including fireworks nights on August 1, August 23, and September 19. There's also a Tony La Russa Hall of Fame Bobblehead on August 9, and a Coco Crisp jersey giveaway on Labor Day, September 1. Call those dates sellouts, at a conservative 35,067 (some will draw standing-room crowds of 36,067), and the A's need to average just a fraction below 23,900 over their remaining 28 games to reach a round 25,000, or 2,000,000 over 80 games.

That, too, could be tough. Many of those games are during the week, few are against marquee opponents, and attendance typically dips in early and mid-September once schools are back in session. All the same, there are encouraging signs.

Sunday's crowd is one of them. On a day that started overcast and cool, the A's managed to draw 30,124, with no promotion, no particularly compelling pitching matchup, all of it about 18 hours removed from a sellout crowd of 36,067. At the Coliseum, sellouts on a promo night often lead to small crowds the next day — not Sunday.

The Ticket Services department is certainly doing its part, helped along by Yoenis Cespedes. Before last Tuesday's Home Run Derby, the A's announced they'd knock a dollar off the price of tickets to the July 23rd game against Houston with each dinger Cespedes hit. He hit 30, and Oakland has sold thousands of $5 tickets, along with the few $2 tickets typically offered on Wednesdays. Look at a seat map and seats in Plaza Reserved, Plaza Outfield, Plaza Level, and Field Level Outfield are completely sold out. The A's won't make much money from that game, at least in ticket sales, but there could be close to 30,000 in the building on a Wednesday night against Houston.

Two million is hardly a statement number, unless the statement is, "look at us, we're a viable market for Major League Baseball!" I've always thought that if the A's can draw 25,000 playing in one of the two most hated ballparks in MLB, they can draw 30,000 or 35,000 playing in a modern venue with equal accessibility and a lively neighborhood for fans to enjoy before and after games.

Crowd numbers don't translate directly to revenue, so 30,000 a night in Oakland doesn't necessarily mean that the A's could ever leave revenue sharing and remain competitive. Still, it's a step. 25,000 — and 2,000,000 — is the step before.