That surprising April contract for Sean Doolittle now looks like it could be Billy Beane's best deal yet.

Share All sharing options for: Revisiting the Sean Doolittle deal

Way back earlier this season towards the end of April, before they had established themselves among baseball's elite, before the Rajai Davis walk-off grand slam that will never be mentioned again beyond this sentence, the Oakland Athletics signed reliever Sean Doolittle to a five-year contract extension with an option for a sixth year in 2020. A solid signing, to be sure, but a relatively uncommon one for a simple reliever.

The contract breakdown, just as a review, looked like this. Including this season, these are the amounts that Sean Doolittle will take home over the course of the deal (financial details via ESPN.com):

There are plenty of other various elements in the deal. The total dollar amount of the deal came to $10.5 million. If Doolittle qualifies for arbitration eligibility this winter, his salaries escalate to $1.4 million next year, $2.45 million in 2016, and so on. Such a scenario would take the total cost of the deal up to $13.75 million. There are also escalators related to games finished that could take the deal even higher, which one would expect him to reach at this point between now and the end of that deal.

Sean Doolittle represents one of the best bargains in all of baseball. In an organization known for being thrifty and finding those diamond-in-the-rough types (oh, hey Josh Donaldson), Doolittle and the contract he signed in April represent one of the best moves performed by Billy Beane in his tenure as the A's general manager.

At the time of the deal, some pondered the decision, given Doolittle's status as a solid reliever but not really a ninth inning guy. Fast forward to this point in the season, and Doolittle has managed to take the closer-by-committee that was established with the early struggles of Jim Johnson and turn it into a closer-by-Doolittle. Have a look-see at what he's done to this point (Davis grand slam included, apologies for the second mention):

Typically, you have to pay top dollar for the type of production that Oakland is getting from Doolittle at the back end of ballgames. Everyone's favorite statistic for Doolittle this year is his 57 strikeouts (and counting) against his two walks (one of which came just prior to the event-that-will-not-be-named). Absurd. But it goes even beyond that ridiculous K/BB rate.

Doolittle's 1.8 fWAR is tied for the best among relievers (with the quietly excellent Dellin Betances), while his FIP and xFIP are both top-five among relievers with at least 20 innings pitched. It isn't any sort of mystery how he's doing it, either. According to Brooks Baseball, he's throwing a fastball 85.47 percent of the time. He relies on that fastball (which averages 95.7 mph) and relies on it up, as illustrated by his zone profile, also from Brooks: 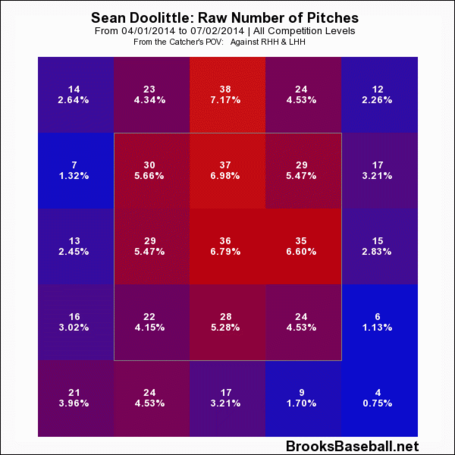 Mike Petriello over at FanGraphs went deeper into Doolittle's usage and extraordinary outcomes. Bottom line, he throws it high and he throws it hard.
At the end of the day, the point is this: Sean Doolittle, a converted first baseman, has not only established himself as a quality reliever over the last few years, but one of the very best in the game. He's not doing anything fancy in doing so, but having established himself as the closer for the Oakland A's on the salary of a low-end middle reliever, Doolittle may have cemented himself as Billy Beane's best deal yet.
Randy Holt is a staff writer for Athletics Nation. You can follow him on Twitter @RandalllPnkFloyd.