Keeping the A's in Oakland: An interview with Bryan Parker

Oakland Port Commissioner and mayoral candidate Bryan Parker knows a fair amount about Howard Terminal. He wants to keep the A's in town.

Share All sharing options for: Keeping the A's in Oakland: An interview with Bryan Parker

If you're reading this blog, chances are you've followed the A's stadium saga over the years. From Blue Ribbon Committees to San Jose to Fremont to now mentions of San Antonio and Montreal and everywhere in between. You know, I know, it's still in flux.

One day I was listening to the A's flagship station and they were talking about the A's stadium situation, Coliseum City, Howard Terminal and the various possibilities. Port Commissioner and Oakland mayoral candidate Bryan Parker called in and threw down for the Port of Oakland site Howard Terminal.

I reached out to Mr. Parker and we sat down last week to chat about the A's stadium.

If there are two words that describe Parker's philosophy, they would be "creative" and "urgent." The urgency applies not just with the A's new 10-year lease at O.Co Coliseum, but also with immediately moving forward on a plan to keep the A's and the Raiders. The creativity comes in crafting the long term plan.

Parker cares about keeping the A's for many reasons. He grew up in Stockton, going to A's and Raiders games as a young child. His mom went to college with a future Raiders player and he kept going to games as a Cal student and Oakland resident.

He believes that there is an intrinsic value in keeping the A's, not just from an economic standpoint. "There is a soft economic impact and emotional ties. Economists can put a monetary value to goodwill and what it means to a city. The A's are part of the identity of Oakland." Of course, the hard economic consequences of loss of sales taxes, loss of jobs, loss of game day revenue, and loss of national exposure and money being spent in Oakland weigh heavily into that value.

In the course of the recent lease talks, A's owner Lew Wolff has emphasized that he is not looking at the Howard Terminal site as a possibility. He in fact called it "worse than a nonstarter." I wouldn't expect him to say anything different while trying to negotiate a lease at a different site, lest Oakland politicians start trying to use that for leverage. Remember, Wolff said the same thing about staying in Oakland, but recently both he and Selig have openly talked about staying in the East Bay.

Howard Terminal is Port of Oakland waterfront land that is no longer being used for port activities. The Port of Oakland (Parker being one of the votes) voted to enter into an exclusive negotiating agreement with a group of investors called Oakland Waterfront Ballpark, LLC ("OWB"). OWB is headed by Mike Ghielmetti who is responsible for the Brooklyn Basin hi-rise condo and public parkland development on the Oakland waterfront. 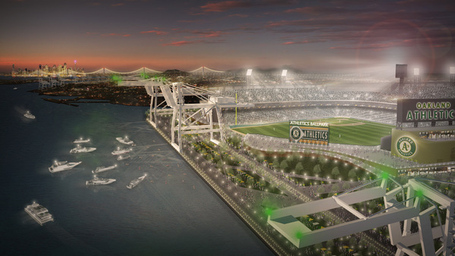 From his unique view as a Port Commissioner, Parker is decidedly in favor of the possibilities of developing Howard Terminal. "You look at other waterfront sites in the U.S., not just across the Bay but Pittsburgh, Baltimore, Cincinnati. They have taken areas that are sketchy to say the least and revitalized these areas. The benefit of that is you can take it from a sports experience to an entertainment experience. When you do that people start coming down to an area to spend money." As a mayoral candidate his platform focuses on alleviating poverty by bringing more economic opportunities to Oakland, and reducing crime through reducing poverty. After losing his sister to murder in her 20's, he knows firsthand about the terrible impacts of violence and crime on a community, and he is a genuine believer in the jobs that a new waterfront development can create and how those can positively impact the people of a community.

From my observations, stadiums like Nationals Park and Turner Field (both on Coliseum-like sites) have done nothing to their surrounding areas. I can't speak from personal experience vis-a-vis Baltimore and Cincinnati, but I have spent a great deal of time at PNC Park in Pittsburgh and AT&T Park in San Francisco. I also saw those areas before those parks were built. The surrounding areas are transformed; where there was literally nothing there are now dozens of lively businesses, hi-rise condo buildings, offices, and the like.

They are working on raising that money. If and when it's raised and the Raiders still want to stay in Oakland, it likely will be an easy decision to sell them the Coliseum complex, or at least part of it.

Meanwhile OWB is putting in money to study the Howard Terminal site for a ballpark. Given their experience with Brooklyn Basin, they are familiar with the unique and complicated alphabet soup of waterfront development in California. Parker mentioned that Ghielmetti and company are currently sinking money into studying clearance of CEQA (California Environmental Quality Act) and BCDC (Bay Conservation and Development Commission) hurdles. They are trying to get to a clear handle on what exactly it would cost to clean up the site and build the park.

However, OWB is not a Lew Wolff group, and Wolff owns the team. So what's the endgame? Would Wolff be convinced to build at Howard Terminal, essentially becoming a partner in a massive stadium and surrounding development? "After seeing the hard numbers, maybe he would be convinced regarding the viability [of a Howard Terminal stadium], or the group would pay such a price that would be compelling to have the team brought to sale." Of course, the third, unspoken scenario is that OWB finds the costs prohibitive and re-engages with the Port on other possible waterfront uses.

That being said, the fact that they are actually studying this now and are hoping and preparing to make an offer to Lew Wolff would put both Wolff and Selig into a corner. If Oakland has a site that is proven to be viable and the cash to make it happen through a willing buyer or co-developer, MLB likely would want to build there. Selig has not been shy to help push through a sale of a team in the best interests of baseball, and as Parker says, "Bud Selig has been a lever to help Lew Wolff be reasonable" in his dealings with Oakland. Of course the first step is OWB actually coming up with some concrete numbers and bringing us closer to a decision.

Nevertheless, Parker doesn't rule out the Coliseum site. He believes with a little bit of creativity, perhaps tearing down Oracle Arena, both the Raiders and the A's could fit there and make it work. It would take creative solutions with "Oakland's business partners" as he views them. If the Raiders raised the money, and the A's decided that they had the money, a Coliseum City could be a possibility. 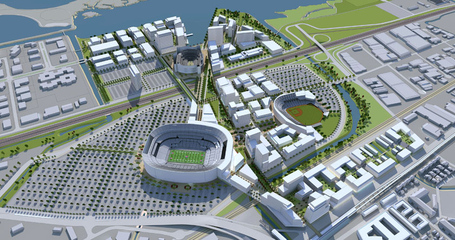 One rendering of Coliseum City (commissioned by City of Oakland)

In either scenario, Parker did not completely rule out any type of public funding for the development. His studies consistently show that 60% of Oakland residents are actually in favor of public funding for new A's and Raiders stadiums. That was interesting news. However, he also was forthright that the city does have bigger priorities, and perhaps in such a scenario the city would put in for transit or infrastructure upgrades that benefit the teams and the city as a whole rather than directly help pay for the stadium.

But before we jump 50 steps forward in the creative dream scenario, we need to get back to that urgent part.

The Coliseum lease will be voted on again today. The previous no-show for the vote "made Lew Wolff livid, to say the least." said Parker. "When you have an owner that has talked about moving the team, and you don't show up, that doesn't accomplish anything."

Although Selig may have been an unlikely ally to the City of Oakland through this process, from his recent quotes (referring to the lease negotiations as "tortures of hell"), Oakland should move quickly. Especially because the current lease on the table is better in every way than the previous lease: More rent money and new scoreboards already put it leaps and bounds ahead of the previous version.

The current lease (as drafted and publicly released) includes a clause obligating the A's to negotiate in good faith on a new stadium at the Coliseum complex but not anywhere else. Of course, not having a contractual obligation does not mean that you won't negotiate if presented with something attractive, and the lease also allows termination if the A's find any site anywhere in Oakland so it does contemplate other possibilities. Now it's on the city to get this done and actually work with its business partners in the A's and give them a reason to stay. It is impossible to make any progress on a new stadium without this lease in place.

Parker doesn't see the Raiders and A's in a true conflict. If the money is there, the details will be worked out.

The ideal timeline to keep Oakland's teams is that over the next year or two, the Raiders come up with that last $200-$400 million they need, and the Port and OWB get a clear handle on the cost of a new Howard Terminal ballpark-plus development. As Parker said, "It would be a travesty if we didn't do everything we could to keep them. You cut out part of your soul."