Finding the next Brandon Moss - Part one

Brandon Moss was a failed prospect before Oakland gave him a chance. How did Oakland know he might be successful?

Share All sharing options for: Finding the next Brandon Moss - Part one

Most A's fans know Brandon Moss' story. He was drafted by the Red Sox, traded to the Pirates, then traded to the Phillies before ultimately being released. During his many travels, Moss received inconsistent playing time at the big league level and never really got a chance to show what he could do. Oakland took a flyer on Moss, mainly because he had shown some power from the left side in his minor league career. The rest as they say is history. With a fighting chance in 2012, Moss broke out with a 160 wRC+ over 84 games, then has followed that with a 2013 of 137 wRC+ and at the time of this article a 143 wRC+ in 2014.

Wow. From nearly out-of-baseball to All-Star. I wonder who will play Moss in the Disney movie.  But the question that begs to be asked is: how did this happen? How was Moss able to break out when so many players just can't make the jump from minors to majors? Was there something about Brandon Moss specifically the A's targeted? I thought I would try to find out.

Armed with FanGraphs new heatmaps feature, I tried to determine if there are specific traits that make hitters more valuable than others, especially with left-handers. Take a look at how pitchers work both right and left-handed hitters. (Click on any of the pictures to blow them up.)

We see some pretty major differences. One, left-handed hitters see fewer pitches in the strike zone than right-handers (53.5% vs. 57.1%). This seems to suggest that left-handed hitters need to have a better eye for pitch selection than right-handers. Second, left-handers see far more pitches on the outside half of the plate than righties and fewer pitches on the inner half (33.7% vs. 19.8%). This is especially true against right-handed pitching, who represent the majority of pitchers.

This presents us with a bit of an enigma. Hitters are taught to control the inside portion of the plate. Ted Williams is famously quoted as saying "baseball history is made over the inner half of the plate." I have personally heard a talk from a former MLB hitting coach emphasizing gearing the swing for the upper inner third. But perhaps this isn't quite right. Maybe left-handed hitters should gear their approach to the outer half. Or more specifically to a small portion of the strike zone I am labelling the heart of the plate. This portion represents where the majority of the pitches a left-hander sees- one quarter of the strike zone just above the knees on the outer half. 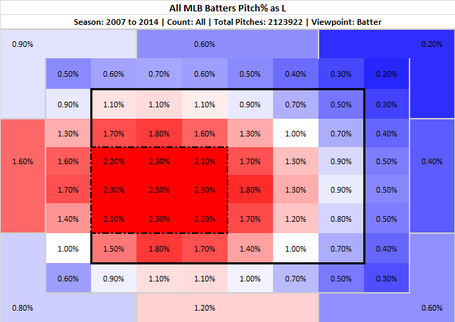 To see the importance of handling the heart of the plate vs. the importance of inner half, I performed the following analysis. For the 134 hitters with qualifying PA since 2007 (the date FanGraphs has heatmaps data), I multiplied the league average pitch tendencies against left-handed hitters against each hitter's AVG/P and SLG/P heatmaps. Then I summed these products for both the heart of the strike zone and the inner half of the strike zone. Let's call these numbers the heart factor (fHeart) and inner half factor (fInner). The factors for the AVG heatmaps don't show much correlation to predicting AVG, but the SLG heatmaps are interesting.  Take a look at the following plots.

While neither of these offer an air-tight relationship, we can glean some information from them (SLG has components of ballpark factor and speed. I bet the correlations could be improved with higher fidelity data). First, looking at the heart of the plate is a better predictor of SLG than the inner half. How about that? We can get a better feel for SLG by looking at how a hitter does in one quarter of the strike zone as opposed to one-half of it, and the inner half no less. Second, the performance of a hitter in the heart of the strike zone has a larger predicted impact than performance on the inner half (larger slope).

Looking at the numbers shows some really interesting tendencies. Would you believe that Daric Barton has the same or better inner half score than Adam Dunn, Jason Heyward, Brian McCann, Luke Scott, Shin-Soo Choo, Johnny Damon, John Jaso, and Brandon Moss? Oh if only pitchers threw inside to Barton! (This may actually give some life to the whole Barton-had-reverse-platoon-splits-early-in-his-career talk. From the plot above, left handers pitch inside more to left handers than right-handed pitchers do at 21.2% vs 19.2%.) Would you believe Josh Reddick has a higher inner half factor than all those guys plus Ryan Howard, Chase Utley, Alex Gordon and the same as Joe Mauer?

Why doesn't Barton have a higher SLG than all these guys? Location, location, location. Barton's heart score is a measly .023. Out of 134 hundred left-handed hitters only Nick Punto, Dustin Ackley, Chris Getz, and Alex Cora have lower scores. Barton's strengths simply don't overlap with where pitchers pitch.

These heart factors may (I emphasize may) also have a sanity check element to them. For example, Daric Barton in 2010 out-SLG'd his heart prediction by 65 points. The only six hitters able to maintain a 60 point margin over their heart predictions are David Ortiz, Joe Mauer, Josh Hamilton, Justin Morneau, Todd Helton, and Joey Votto. That is a pretty elite class. These guys also OWN the inner half with an average inner half factor of .047. If the pitcher is stupid enough to throw an inside pitch to these guys, they make them pay. Barton's inner half score was .032 in 2010 and .030 for his career, average but not good enough to make up the difference in his heart score. This gives one the impression that Barton may have been a bit fortunate in 2010 and some regression was due.

On the other side of this, Brandon Moss came out of nowhere in 2012 to SLG .596. His heart-predicted SLG: .587. We get a better feel that Moss can hit pitches where pitchers pitch, and this performance was real and repeatable. In fact, Moss is now underperforming for his career based on his heart prediction by 43 points. He owns the heart of the plate (but not so much elsewhere).

Interestingly, one would think pitchers would get the memo and stop pitching Moss down and away. Nope, thus far in 2014 Moss has seen 20.1% of his pitches in this heart of the plate - exactly league average. As Ted Williams said, "pitchers by breed are dumb and hard-headed."

Tying this all together, we can start to see Brandon Moss is a perfect storm. Moss has the second highest heart score off all qualified left handers (sorry guys, Carlos Gonzalez is #1). Moss doesn't handle the inside half very well, coming in at 102 out of 134 on inner half scores. But Moss sees the majority of his at-bats against righties, who don't come inside very often against lefties. Moss' SLG goes down against lefties because they pitch inside on him more (among other things).

Moss was given a chance with Oakland because he showed potential to hit for power against RHP. But really, Moss possesses a more specific skill: the ability to hit certain pitch locations really, really well. These pitch locations just happen to overlap with where pitchers pitch the most. Hoo-ray!

Next time we will examine how we can scout hitters to see if they will become the next Brandon Moss.

Also big thanks to scOOby for planting this seed of thought with me a few months back.