Game #94: Iwakuma dominant, Seager has a night in Athletics 6-2 loss to Mariners

Share All sharing options for: Game #94: Iwakuma dominant, Seager has a night in Athletics 6-2 loss to Mariners

The Athletics dropped the second game of this three-game set by the final of 6-2 to the Seattle Mariners. It's a nice thing that I have not had many occasions to recap a game that I feel has been so dominated by the opposition that I really only have significant things to say about how well opposing players did. 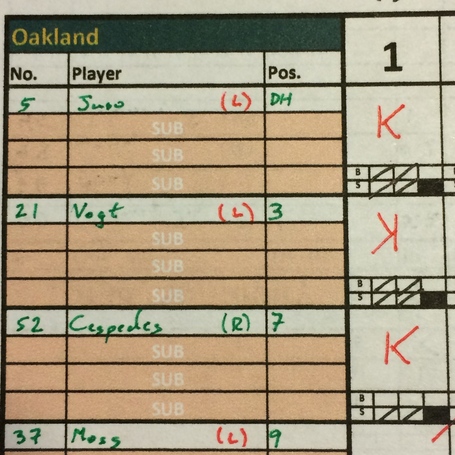 The 15 pitches they faced in the first inning were just two fewer than the most in any inning against Iwakuma. Brandon Moss almost scored off Iwakuma in the fourth inning, but his bat completely shattered, turning his home run power into warning track power. Indeed, the A's did their best to separate the balls from the strikes, but Iwakuma kept painting the corners and there was little the Athletics could do, as the pitch count line on my scorecard shows:

Home plate umpire Bob Davidson may have been the best entertainment of the night. After Mariners shortstop Brad Miller struck out on a pitch to the outside corner, Miller stood at home plate briefly, made a comment to Davidson, and walked away. Not walk away like "keep swearing at the umpire while walking away" but turned around after his brief word and began walking straight back to his dugout. Davidson, however, walked toward the Mariner dugout and threw Miller out of the game.

Notably last night, Davidson was seen arguing with the Athletics dugout at the end of the game after Nick Punto and Bob Melvin were given ejections following a game-ending strikeout on Punto called by James Hoye. This would also be the time to note that Bob Davidson was suspended two years ago for "repeated violations of the Office of the Commissioner's standards for situation handling" following this incident with Charlie Manuel:

Bob Davidson will work the 85th edition of the Major League Baseball All-Star Game next Tuesday.

Kyle Seager have a night

Jesse Chavez seemed to be struggling to pt batters away throughout the night. He walked three by the end of his day after 5⅔ innings. He had just allowed one run through two innings, and there was hope that one swing of the bat could turn it around until the fifth inning, when Kyle Seager knocked out a no-doubt two-run homer to make the game 3-0. Seager also doubled in the seventh.

On defense, Seager turned a 5-4-3 double play in the fourth picking up a tough hop on a slow roller on the infield grass. In the eighth, Seager did extremely well to backhand a slow bouncing ball up the third base line as the quick Craig Gentry raced up the line, his one-bounce throw to Logan Morrison at first just in time:

Fernando Abad stranded his 16th inherited runner of the year in the sixth inning and got one out in the seventh before turning it over to Ryan Cook. He has not allowed an inherited runner to score all year. Ryan Cook got two straight outs to strand Kyle Seager before handing the 0-3 game over to Jim Johnson.

I feel like this has been Jim Johnson’s line all year: "Willie Bloomquist singles on a ground ball to second baseman Eric Sogard."

Yoenis Cespedes saved a run with yet another spectacular throw to get Bloomquist out on a throw from left field:

And the pièce de résistance:

Hiashi Iwakuma entered the ninth with 96 pitches and every indication that he would finish the game. Despite an 0-1 single to John Jaso, Iwakuma looked strong striking out Stephen Vogt and getting Yoenis Cespedes to fly out to right. Then Brandon Moss strolled up to end the A's scoreless innings streak at 16 by knocking a line drive home run to the front rows in right field to pull the game to 6-2.

Iwakuma was done, but Yoervis Madina got Josh Donaldson to line out to right to end the game, 6-2 Mariners.

Prior to these two games, the A's won seven of their last eight. The Mariners, specifically for this series, felt forced to play games with their rotation just so their best pitchers could beat the A's. It takes the likely starter for the American League at his best to beat the A's number 2 or 3 starter. It takes a superbly dominant performance from Iwakuma to dominate these A's, and even then they show they're not done until the last out is recorded. No matter what happens tomorrow, they'll lead the AL West headed into the All-Star Break, and they'll still be on a pace to win at least 99 games.

Tomorrow the A's finish up the series at 1:10 pm. Sonny Gray takes on Chris R. Young.