The Oakland Athletics (58-35) face the Seattle Mariners (50-43) at Safeco Field for the second game of this three-game set headed into the All-Star Break. Taking the mound for the A's is Jesse Chavez (7-5, 3.06, 101 K). Chavez pitched last Tuesday against the San Francisco Giants, tossing six innings of four-hit shutout baseball and earning the victory.

Seattle opposes Chavez with Hisashi Iwakuma (7-4, 3.07, 72 K). The third-place vote getter in last year's AL Cy Young voting, Iwakuma appears to have regained his stride after two consecutive quality starts against the Houston Astros and then the Minnesota Twins. This is his first game against the Athletics this year.

Vucinich has been with the club since it moved from Kansas City in 1968, initially as a ball boy, and serving in various clubhouse roles until becoming equipment manager in 1994.

The A's All-Star catcher is batting seventh. Think about that for a moment. Then remember there are three other All-Stars, two other catchers, and Jed Lowrie batting in front of him. *Fosse "Wow."*

Alberto Callaspo was placed on the disabled list today with Andy Parrino called up. Parrino is not in the starting lineup, but Bob Melvin has a few possible uses for him, as the San Francisco Chronicle's Susan Slusser tweets:

Melvin says Parrino could get time in OF as well as infield, plus he's switch hitter, so versatility will be factor w/ some banged up guys.

Besides Parrino, Coco Crisp and Nick Punto are available switch-hitters off the bench, though no word if Crisp was improved from yesterday, when he did not appear in the game to pinch hit. Right-handed batter Nate Freiman is also available after he entered the game last night after Alberto Callaspo exited.

The Mariners are trotting out a nine-man bullpen headed into the All-Star Break and only used Fernando Rodney yesterday. Meanwhile, Jeff Samardzija pitched all eight innings for the Athletics yesterday. Both bullpens are pretty well-rested, though Tom Wilhelmsen will probably not be available today given his pseudo-start on Thursday. 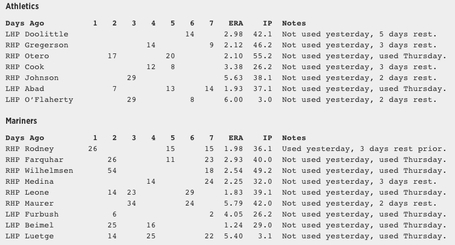 From the Oakland Athletics game notes: