With the A's and Mariners squaring off for three games, I asked Scott Weber of Lookout Landing a few questions about his favorite team. Here's what he had to say!

Ding dong, the Giants have been defeated. With that season milestone out of the way, it's time to get our focus back on winning the World Series. This weekend, in the final series before the All-Star break, the A's visit the division rival Seattle Mariners for a serious showdown. Normally, the prospect of an A's/Mariners series bores me to death. But they haven't played in a couple months and both teams are now good at the same time, and for the first time in years I'm actually excited to see our rivals from the north. The A's currently stand at 58-34, and rather than give you all the big-picture numbers like I usually do I will leave you with this fascinating team stat: A's hitters have 356 walks (1st in MLB) and only 646 strikeouts (27th in MLB). That's not one player with good discipline. That's the entire team. Holy Toledo.

Here are the expected pitching matchups for the series:

Shark vs. The King Of The North in the opener? You couldn't ask for a more compelling matchup. Usually we feel like a game against Felix is an auto-loss, but tonight there is every reason to believe it could go Oakland's way. Iwakuma is healthy and backing up last year's success with a 3.07 ERA and a 9.0 strikeout-to-walk ratio through 13 starts; don't worry, though, the A's always crush him. Chris Young is still a Major League pitcher, which is just a huge surprise. He was solid in his last start against Oakland, but you'll have to decide if you believe more in his 3.08 ERA or his 4.92 FIP. The Mariners open this series at 49-43, in third place in the West, nine games behind the A's.

Before we get to Scott's Q&A, here is a special bonus feature for today's preview. I joined Gary Hill on the official Mariners pre-game show to talk about this weekend's showdown. My segment starts at 23:15 and goes for around 12 minutes.

1. Robinson Cano is hitting well and will make his fifth straight start in the All-Star Game later this month. However, he's hit only six home runs and has an isolated slugging mark of .121 -- far below the .216 he posted over the last five seasons. How much of that is his switch to Safeco Field, how much is the decline of a 31-year-old middle infielder, and how much is just a fluke?

SW: I don't think it has as much to do with the ballpark as people think. He just hasn't driven that many balls to the wall for the ballpark to really come into play. He's hitting more ground balls than he used to, and while he's still been a productive hitter, it just isn't the same. It's too early to tell if it is decline or an aberration, but at least he's still an excellent hitter. This isn't exactly what they paid for, though.

2. Justin Smoak was sent down to Triple-A last week after another disappointing performance (.208/.282/.361). Who is playing first base now? And is there any hope for Smoak?

Mariners/A's series preview Q&A with AN

Mariners/A's series preview Q&A with AN

SW: Logan Morrison has been manning first base for a few weeks now, and he's generally done a good job in Smoak's absence. It continues to be a problem position for the Mariners, as they've extended Smoak a way longer leash than he deserves, and have been unable to acquire anyone better to replace him. I don't have any hope for Smoak. At this stage in his career, under this coaching staff, he seems to be what he is. Everyone still says the potential is there, but maybe it isn't and never was. He's very streaky, has mostly warning track power, and just cannot get over the hump. I wouldn't care if he stayed in Triple-A the rest of the season. He's out of rope now that the Mariners are contending. (Editor's note: Smoak was recalled before the game on Friday to replace Michael Saunders, who went on the disabled list with an oblique injury.)

3. Out of the 18 hitters (non-pitchers) who have taken at-bats for the Mariners this year, only five have OBPs of at least .300 -- Cano (.387), fellow All-Star Kyle Seager (.350), Michael Saunders (.327), James Jones (.317), and Cole Gillespie (.312, 78 PAs). Does the team have a systemic problem with plate discipline (given that they developed many of the offenders), or are there just coincidentally a lot of hackers on the roster? Is there anyone other than those five who you feel has had a positive season at the plate and/or who you have faith in to improve?

SW: The Mariners have always enjoyed employing hackers in their lineups, and while this year's team is better thanks to Cano and Seager, they still have a lot of disappointment around the horn. Dustin Ackley looked like he could be turning the corner early, and then he settled right back into being terrible again. Endy Chavez is playing far too often, signifying the team's need for an actual bat in the lineup. Mike Zunino has monster power and great potential at the plate, but he's still pretty raw -- he has more home runs than walks. Call the M's the anti-A's. It's once again an issue of young talent not stepping up and the front office's decision not to abandon them before they could, in theory, break out.

4. Amazingly, Chris Young is still in Seattle's rotation and is starting on Sunday. Are you surprised that he's stayed both healthy (105⅓ innings) and effective (3.08 ERA) enough to stick on the team? And will the Mariners let him keep starting all year given that he's surpassed 100 innings only once since 2009 (138 in 2012 between Majors and minors)? Or will he be given any kind of innings cap?

SW: Young doesn't make any sense, so I'm not surprised by anything anymore. He had a weird, rare procedure done this offseason where they shaved off part of his rib, and now he feels great -- there's not a lot to compare it to. And he's completely breaking peripheral metrics like FIP and SIERA, throwing 85-87 mph way up in the zone, generating nothing but pop-ups and deep fly balls. It's pretty hard to hit Chris Young if it's not a home run at this point. He's fascinating to watch; batters just cannot pick up the ball very well coming out of that monster 6'11 reach right over the top. It really gets up on them despite the low velocity, causing them to get under balls constantly. I think the Mariners will let him roll as long as he keeps this up -- right now, it looks like the first to be replaced in the rotation will be Roenis Elias. 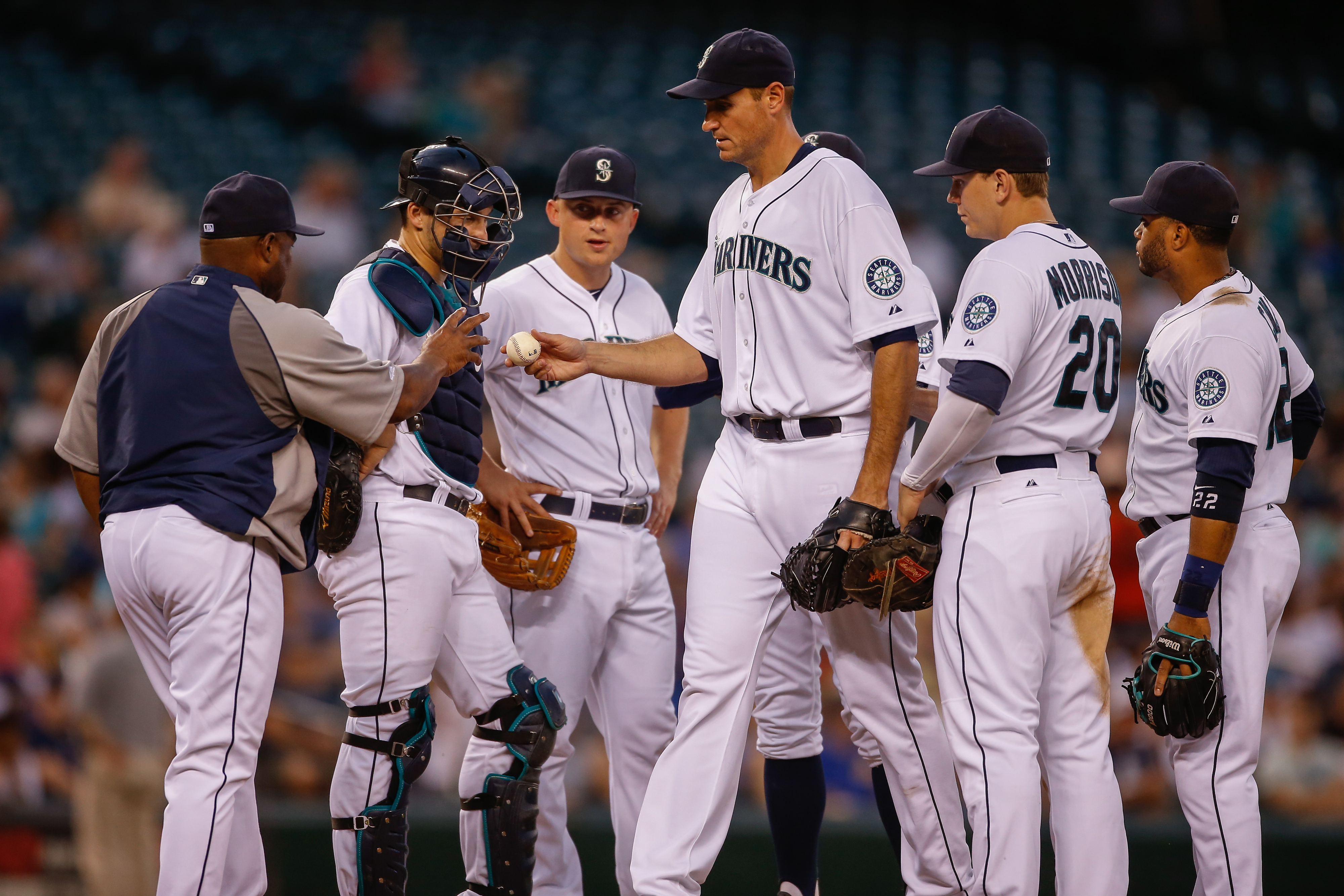 SW: I'll take Danny Farquhar, though Dominic Leone has been a tremendous surprise. Farquhar has the closing experience and filthy stuff, plus he's able to generate ground balls in bunches and miss bats. I still don't trust that Tom Wilhelmsen is back to his old self yet, and Yoervis Medina is too inconsistent with his control to be relied upon. For the lefties, you have to go with Joe Beimel at this point. His stuff is worse than Furbush's, but his command has been superior.

(Editor's note: The breakdown of Seattle's loss on Thursday, in which Wilhelmsen started and the bullpen pitched the whole game so that Felix could be pushed back to Friday against the A's.

Felix better be on his game tonight, for their sake.)

6. The Mariners decided to ask for nine innings from their bullpen on Thursday in order to push Felix Hernandez back a day to face the A's in the opener. What are your thoughts on that strategy?

SW: I think it's foolish. At the time of the decision, the Mariners were rolling and it looked like a theoretical sweep of Oakland could have put them right back into contention. Instead they got cute, bumped Felix to face Samardzija, and now could lose three of four to the Twins (Editor's note: they did) because they wanted to put their best against a better team. All of these games matter equally, and if the Mariners end up losing the series to Oakland, this could look like a tremendous mistake. I just don't think Lloyd McClendon needed to mess with regular schedules. Felix is having the year of his life, why are you messing with his throw schedule? I don't get it.

Taijuan Walker down, Stephen Pryor up vs. A's Jesus Sucre called up to replace John Buck

(Editor's Note: Scott politely declined the chance for a Felix haiku, stating that "poetry ain't my thing and I'd just embarrass myself." He and Lookout Landing are awesome so please don't hold it against him. Instead, I have prepared my own haiku about one of SB Nation's top blogs.)

The series starts tonight. First pitch is scheduled for 7:10 p.m., Samardzija vs. Felix. I'm still pissed that I have to write that ridiculous last name over and over for the next year and a half, but I'll gladly take that trade-off if he delivers us a ring. At least we're not Milwaukee Bucks fans, rooting for shooting guard Giannis Antetokounmpo. It could be worse.

One more gift to you, Athletics Nation, before I set sail for the weekend: 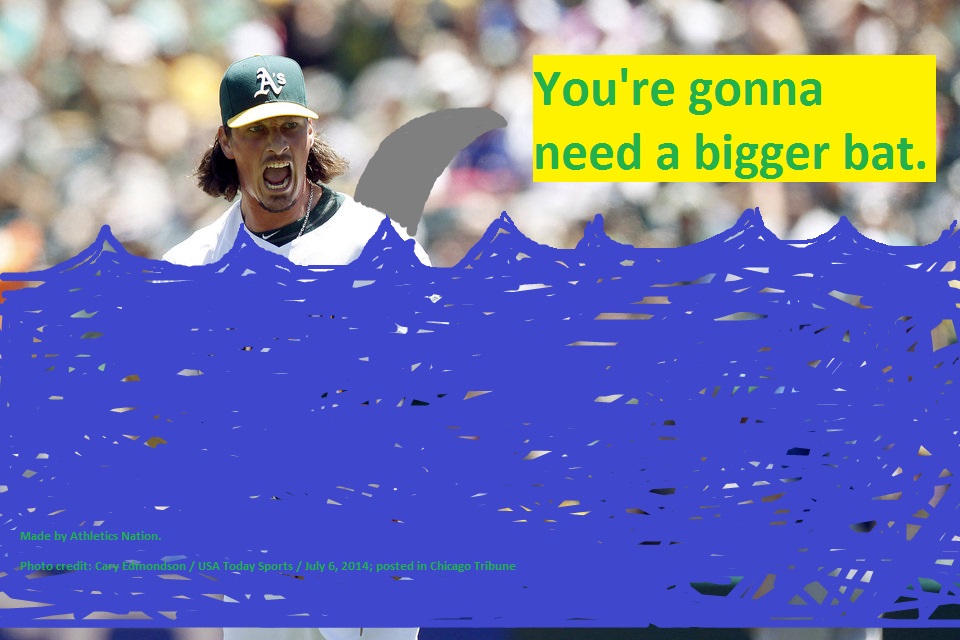